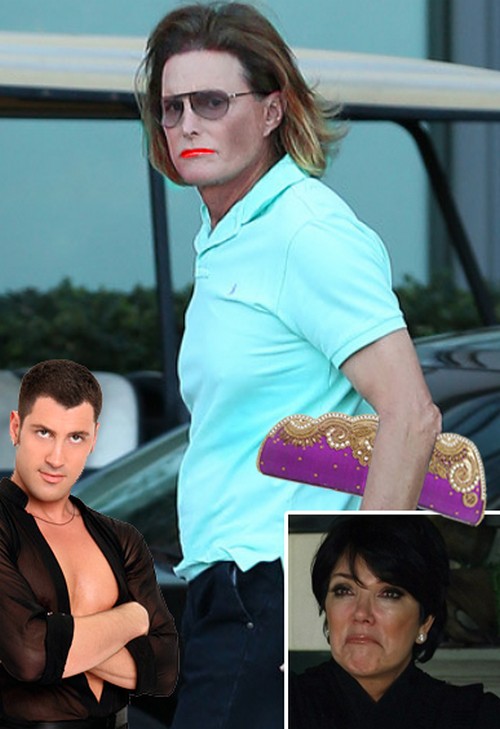 New Reports claim Kris Jenner has threatened to release photos of Bruce Jenner wearing dresses. Radar has recently learned that E! News has secret, unreleased footage of Bruce Jenner cross dressing, which they captured during filming the reality show Keeping Up With The Kardashians which Kris Jenner is threatening to release. What a b***h!

Bruce Jenner recently went public about his desire to become a women in his historical interview with Diane Sawyer, but sources close to the family have revealed, that had Bruce not gone public, and did not choose to do the docu-series for E!, Kris Jenner would have released the footage to spite him in the wake of their split.

The source says, “Cameras caught Bruce wearing a dress in his closet at their Hidden Hills house on several occasions. It was almost as if Bruce had wanted to get caught, but he was unaware that it was captured on film. On one occasion, Kris had been shooting in her dressing room, and Bruce could be seen in the background scurrying out of the shot because he was in a dress.”

Bruce Jenner announced that he has been filming a docu-series that will explore his transitioning from man to woman, but the source has revealed that Bruce may have felt forced to film everything.

“In the early staged of Bruce and Kris’ separation, she had threatened to release the footage, along with pictures of multiple dresses in Bruce’s closet. This was one of Bruce’s reasons to do the docu-series. He wanted to put it out there, and not anyone else. Now that he’s tone public, Kris no longer has any leverage on Bruce.”

Apparently, Kris Jenner is not too happy with Bruce revealing all of this information, and that her “supportive” side on social media is all a front. We recently reported that Kris Jenner retracted her comments about Diane Sawyer, where she originally stated that she was never asked to contribute a comment to Bruce’s interview.

With all of the drama surrounding the interview, it sounds like it will only be a matter of time before this family cracks and the truth comes out. Until then, you can get ready to watch Bruce Jenner’s untitled reality show on E! this summer.