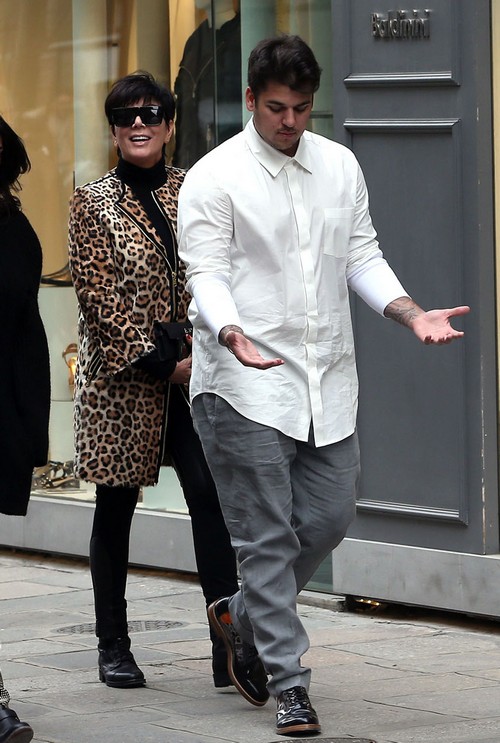 Kris Jenner is a master manipulator, and we’ve seen that time and time again. Her latest coup has been to trick her son, Rob Kardashian, into attending rehab – against his will. According to a report from Radar Online, Kris took Rob to a Malibu rehab center under the pretense of giving him a tour, but she wasn’t fooling anyone.

Radar’s source explains, “Kris took Rob to a facility in Malibu last year at night for a tour. She did it at night so the press wouldn’t know about it. She assured him that there was no pressure to enroll, but Rob felt ambushed and got very angry. He had a friend come pick him up, and then he disappeared for three days. When he surfaced days later at Khloé’s house, Rob didn’t want to talk about even going to rehab.”

Well, considering how much Rob hates his family, I’m surprised that he even agreed to accompany Kris Jenner anywhere. He’s outright blamed her for all of his problems, and her attempt to help probably aggravated his angry feelings towards her.

Right now, Rob Kardashian’s entire family desperately wants him to attend rehab, but he’s still refusing to go. The situation will undoubtedly continue to get worse, until it ends up with Rob reaching the point where he doesn’t have a choice anymore. He’s still in control of his own mental faculties right now, but if his issues continue, how long will that realistically last?

What do you guys think about Kris Jenner trying to trick Rob Kardashian into attending rehab? Do you think Rob will ever willingly attend rehab for all of his drug and mental health issues, or will he just refuse to go until his problems get worse? It doesn’t seem like there’s anyone he’s listening to right now, but perhaps if Bruce Jenner tried? Rob did tweet a supportive message to his father after Bruce’s Diane Sawyer interview, so it’s not out of the question…