BY Amanda Austin on May 26, 2015 | Comments: 2 comments
Related : Gossip, Hot Celebs, Hot News, Keeping Up With The Kardashians, Kylie Jenner 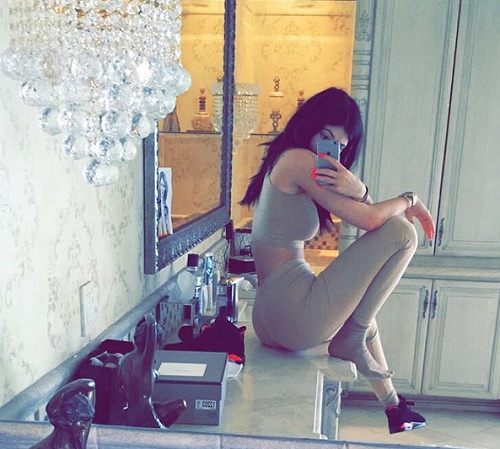 Kylie Jenner and Blac Chyna’s feud rages on. It’s safe to say that Tyga’s baby-mama and his 17-year-old girlfriend won’t be doing any co-parenting together any time soon. Blac Chyna has been on the warpath since her son’s father, Tyga, dumped her and ran off with the youngest cast member of Keeping Up With The Kardashians – and although Blac Chyna is typically the one instigating drama on social media (we still can’t stop laughing about her fake lips picture), Kylie Jenner is no angel. Kylie is just much more covert about it.

On Tuesday, May 26, Blac Chyna posted a photo of herself posing in a pair of white spandex and a crop top. Two hours later, Kylie Jenner posted a photo of herself wearing the exact same outfit – only it is gray instead of white. Kylie captioned the photo, “snap.” We totally believe in coincidences, but what are the odds that Kylie Jenner would just happen to be wearing the same outfit as Blac Chyna on the same day, and post a selfie with in two hours of her boyfriend’s baby-mama?

Kylie Jenner is constantly complaining about drama – and insisting that she wants nothing to do with the drama. But it seems like Kylie has been checking Blac Chyna’s Instagram page on a regular basis, and definitely stirring the pot. Kylie could be in over her head though – because rumor has it Blac Chyna has been patiently waiting for Kylie to turn 18 years old and be a legal adult, and then she plans to attack her when she sees her. If an adult hits a child, or anyone under 18 years old, there are serious repercussions. However, once Kylie turns 18 years old, Blac Chyna won’t have to worry about getting slapped with any child abuse charges or endangering the welfare of a child.

Do you think it is just a coincidence that Kylie posted a photo of her wearing the same outfit as Blac Chyna just two hours later? Is Kylie as innocent as she pretends to be – or is she stirring the pot and creating more drama? Do you think Blac Chyna will follow through with her threats and try to fight Kylie after she turns 18? What do you think about Kylie Jenner/Tyga dating? Let us know what you think in the comments below!