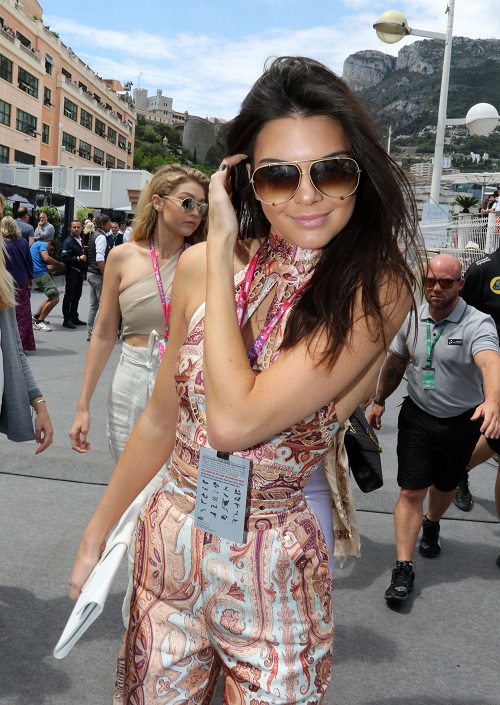 Kylie Jenner and her boyfriend Tyga headed to Monaco this week, and have been flooding Instagram with some PDA pics to remind everyone that they are madly in love. But their awkward age difference is really starting to take a toll on their relationship. Kylie and Tyga were snapping selfies together at the Grand Prix; however, when Tyga went off to perform at The VIP Room, the youngest Keeping Up With The Kardashian star had to skip his performance and sit alone in her hotel room because she is not 18 years old, and couldn’t get into the club.

On May 24, Tyga took his rapping on tour to France – and performed at The VIP Room in Monaco. Gigi Hadid and Kendall Jenner partied the night away and supported Kylie’s boyfriend. Insiders say that Kylie had a complete meltdown when the Monaco club refused to give Tyga any leeway and bend the rules and allow him to bring his underage girlfriend with him. To add insult to injury, Kylie’s big sister Kendall ditched her and went to The VIP Room with Gigi Hadid. So, not only did Kylie have to sit at the hotel while her boyfriend performed, but her own sister and Gigi didn’t even stay behind and keep her company.

Ironically, while Kylie and Tyga were in Monaco, rumors that the couple were engaged gained a lot of traction when Kylie posted a photo of her hand rocking what appeared to be an engagement ring. Although no one from Kylie’s camp has confirmed or denied the rumors that she is engaged to Tyga, it really is irrelevant – because once again of their awkward age gap. If Kylie and Tyga were to get married, she would either need her mother to co-sign on the marriage or wait until August when she turns 18 and is legally an adult.

According to our inside sources close to the Kardashian camp, at this rate it will be a miracle if Kylie and Tyga make it to her 18th birthday without breaking up. Our snitch dished, “Kylie has a temper, and she is super sensitive about her and Tyga’s age difference. So whenever someone throws it in their faces, like other celebs, or she has to sit out of activities because she isn’t 18 years old – Kylie has a total meltdown. Tyga can only take so many verbal beat-downs from the fiery teen, he is at his wit’s end. He begged VIP Room to let her in, not because he wanted to hang out with her, but because he didn’t want her to be a psycho the rest of their trip.”

Do you think it was messed up of Kendall and Gigi to go party with Tyga, even though his girlfriend Kylie couldn’t get into the club? Or is Kylie just being a big baby about not being 18 years old? Will Kylie and Tyga make it until her 18th birthday, or are they on the verge of another break-up? Let us know what you think in the comments below!