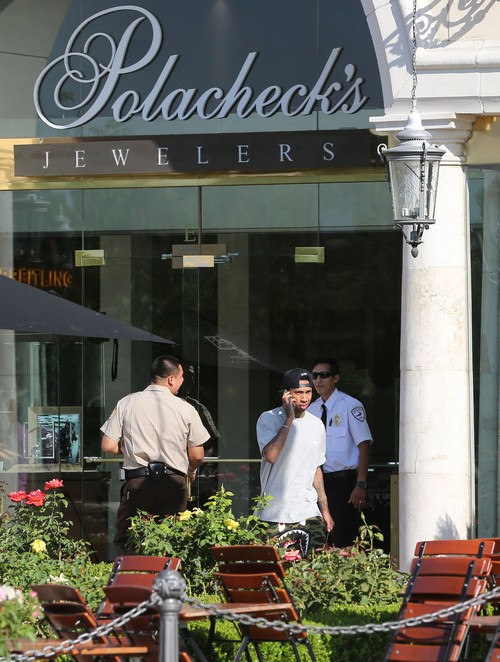 Kylie Jenner and Tyga are going to be engaged on August 10 when Kylie turns 18 and Tyga proposes! Things are definitely heating up between 17-year-old reality star Kylie Jenner and her 25-year-old boyfriend Tyga, but does that mean that wedding bells are in the future for these two young Hollywood lovers? The answer may actually be yes!

Rapper Tyga was spotted out and about at Polacheck’s in Calabasas, California on July 23, 2015. For those who are unfamiliar with Polacheck’s, the store is located in Calabasas, California and is a known for selling luxury jewelry from some of the type jewelry designers in the world. Could Tyga finally be ready to tie the knot with Kylie Jenner? Maybe Tyga even picked up the engagement ring today.

As you know, rumors have been floating around on different websites stating that Tyga had asked Caitlyn Jenner for Kylie’s hand in marriage. Caitlyn Jenner allegedly did not take the proposal seriously, but maybe Tyga took it as Caitlyn giving him the green light.

If you think about, it makes perfect sense for Tyga to be shopping for engagement rings right now. Kylie Jenner’s birthday is on August 10, and at that point, she will be 18-years-old, and free to do whatever she wants.

On top of this, Kylie Jenner has been extremely rebellious lately, and going against her parents Kris Jenner and Caitlyn Jenner. If either Kris or Caitlyn has shown any resistance to the idea of Kylie marrying Tyga, then Kylie will most likely do whatever she wants just to spite them the minute she turns 18-years-old.

Lastly, with two shows, ‘Keeping Up With the Kardashians’ and ‘I Am Cait,’ filming right now, we can pretty much guarantee that something extremely dramatic will have to happen with the family to fulfill the season finale. The Kardashians are known to include things like pregnancy announcements, births, engagements, and weddings in their season finale episodes and the timing is looking just right for Kylie Jenner and Tyga’s engagement or wedding to make it for the next season of Keeping Up With the Kardashians or I Am Cait.

What do you think? Does this overwhelming amount of evidence support the fact that Kylie Jenner will marry Tyga soon? Do you think she should? Let us know in the comments below.

Rapper Tyga is spotted out shopping for jewelry at Polacheck’s in Calabasas, California on July 23, 2015. Rumors are spreading that Tyga asked Caitlyn Jenner for permission to marry her daughter Kylie. Could Tyga have picked up the engagement ring? FameFlynet