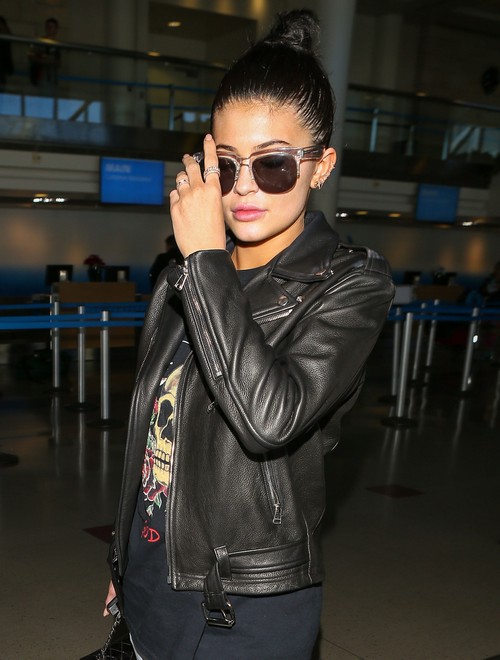 It’s no secret that Kylie Jenner hates Blac Chyna and even though the reality star’s relationship with Tyga is on the rocks, she refuses to dump her rapper boyfriend just to spite her rival. Kylie is done with Tyga after the stunts he pulled while the “Keeping Up With The Kardashians” star was in Australia for work.

Even though Jenner took her “Rack City” rapper boyfriend back the day after she dumped him, things still aren’t going well in their relationship.

To prove that Kylie is fed up with Tyga’s cheating ways, the “KUWTK” star took off over the weekend to party solo at the Art Basel in America event in Miami. Kylie jetted to Miami just days after helping Tyga move out of her house and into his own bachelor pad. Jenner claimed she needed her space and now Tyga is terrified that he is about to get dumped.

Of course Tyga isn’t doing himself any favors lately and it’s almost like he’s trying to anger his 18-year old girlfriend even though he’s already on very thin ice. Tyga has been spotted Facetiming with Blac Chyna multiple times since moving out of Kylie’s house.

One of the biggest reasons Kylie always kept her boyfriend close was to make sure he wasn’t getting too friendly with his baby mama. As soon as Tyga got his own place, calling up Blac is the first thing on his mind.

Even though Kylie Jenner really doesn’t want to deal with Tyga and all of his drama anymore, she just keeps hanging on. Jenner knows that once she cuts her boyfriend off, Tyga will be running straight back into the arms of his ex-fiance and the thought makes the “KUWTK” star sick.

Blac Chyna knows there is trouble in paradise and she’s just waiting for Tyga to come crawling back. The former stripper figured the “Stimulated” rapper’s fling with the youngest Jenner would end soon enough and she was right.

It’s only a matter of time before Kylie finds out just how much her boyfriend has been talking to Blac behind her back. Kylie is ready to move on from Tyga now so it’s a matter of time before they make it official. Then Blac Chyna can finally feel like she won the battle but will she really want to keep the prize or was this battle with Kylie Jenner all about ego?

Kylie Jenner is seen arriving at LAX airport in Los Angeles on December 07, 2015 by FameFlynet