Kylie Jenner Denies Music Project: Recording An Album’s Not On Her Mind At All – Reveals Plans For Cool Interactive Fan Website! 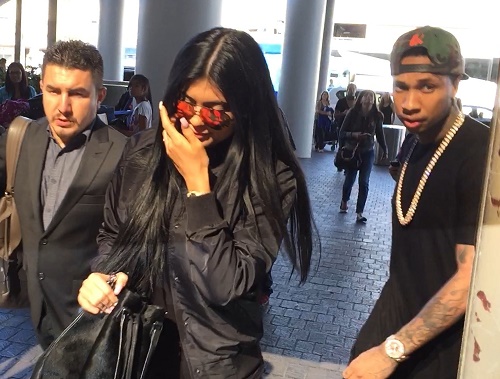 Reality star turned rebel child Kylie Jenner has recently spoke with E! News denying all rumors that she is working on music. As you know, rumors recently surfaced that Kylie Jenner was working on a secret album with her boyfriend Tyga. Sources stated that the two were already in the studio working on something special.

Now, Kylie is speaking out saying that music is not on her mind at all. She says, “I’m not really thinking about that, it’s not something that I’m working on or thinking about.” Jenner has been denying rumors of a single or album release ever since the blogs started talking about her alleged music project.

Jenner goes on to reveal that if she was working on music “of course” she would speak with her brother-in-law Kanye West and ask him for advice. She does reveal, however, that she goes to Kanye for what to wear. “He gives me a bunch of fashion advice,” Jenner told E! News at the Sugar Factory Ocean Drive grand opening.

So can we expect music from Kylie Jenner in the near future? Hopefully not, but the teen reality star does say, “I never say never, so maybe it’ll happen.” In other words, it sounds like Kylie Jenner is working on music, but it will not be ready anytime soon so she does not want too many people talking about it.

Kylie Jenner also reveals that she’s working on a new website that she is very excited about. “It’s not just a website. I’m going to totally connect with my fans more on it and just do a bunch of fun stuff. I have a lot of things planned.”

Kylie Jenner certainly understands how social media works, or at least her publicists do, so we are sure that this website will certainly be innovative. Hey, if a new Kylie Jenner website means we do not have to hear any music from Jenner, then we are totally fine with that. Seriously, though, why does everyone think it’s okay to record music just because they are in the spotlight?