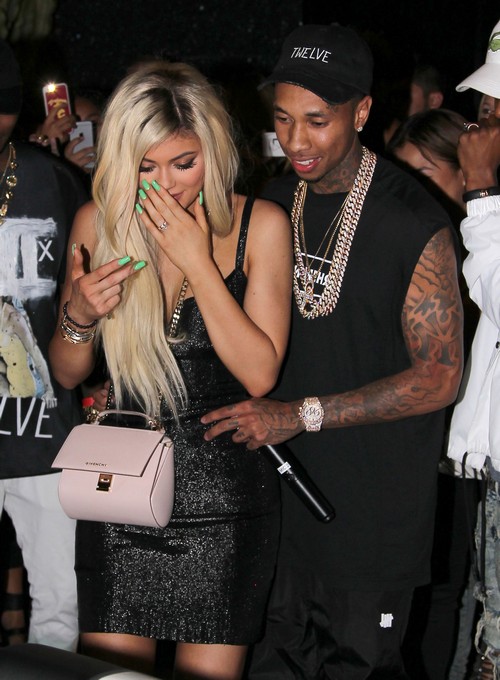 What is Kylie Jenner’s net worth? Well, you might want to sit down for this one. This week the youngest of the Keeping Up With The Kardashians clan rang in her 18th birthday party and the famous family partied in West Hollywood with Kylie to celebrate her FINALLY becoming a legal adult. (Certainly, her 25 year old boyfriend Tyga was over the moon). As of Kylie Jenner’s 18th birthday, the KUWTK star is a multimillionaire, and her net worth is reportedly topping off at around $5 Million.

It was pretty clear earlier this year when Kylie Jenner bought her first Calabasas mansion at the mere age of 17 that the reality TV star was much better off financially than any of us realized. However, if you take in to consideration the fact that she has been starring on Keeping Up With The Kardashians since she was barely 10 years old, couples with her dozens of modeling contracts and endorsement deals – it makes sense. On top of Kylie pimping out clothing lines and other various products, she also recently began her own blog and started up her own hair extension company. She may just be the most business savvy of the Kardashian Klan yet. If she is only worth $5 Million at the age of 18, imagine how much she will be worth when she is her sisters Kim or Khloe’s ages.

Then again, there is a good chance that Kylie Jenner’s net worth could be less than yours or mine if she doesn’t wise up and open her eyes to the fact that her rapping boyfriend Tyga is slowly draining her bank account. Just last week for her 18th birthday Tyga gifted her with a Ferrari, however rumors has it that Tyga didn’t buy the car outright and most likely won’t be able to afford the payments – which means Kylie is going to wind up paying for her own birthday present, and Ferraris aren’t cheap these days. Kylie also has reportedly dished out over $100,000 in cash to pay off Tyga’s back rent lawsuit too.

Are you shocked by Kyie’s net worth? Do you think she will continue to build her empire, or will Tyga milk her dry before she turns 21 and can legally order drinks? Let us know what you think in the comments below!