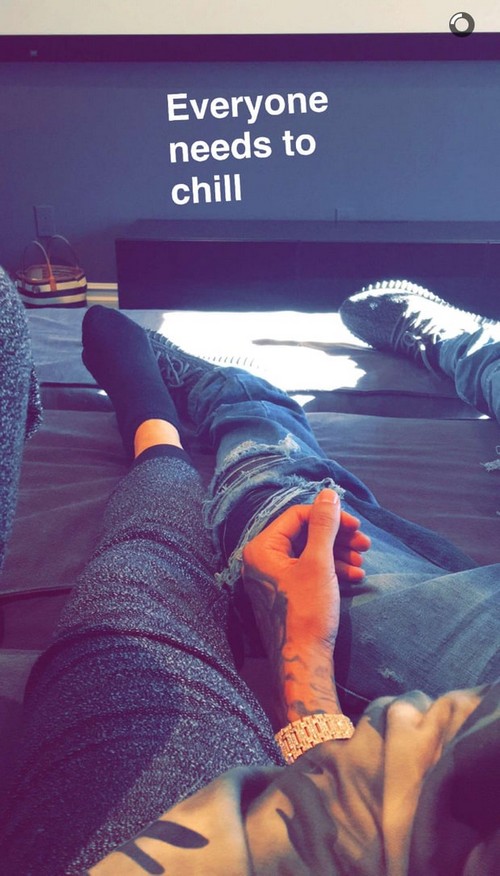 Kylie Jenner and Tyga may have already kissed and made up in a telling SnapChat photo after reports that the reality star and her rapper boyfriend split on Tyga’s birthday just days ago.

The Kardashians and the Jenners went radio silent for Tyga’s birthday on Thursday, November 19. Not even Kylie Jenner wished Tyga a happy birthday and that set off some major flags that the couple had split up. It didn’t take long for the rumors to start and for people to speculate about what Tyga must have done to get dumped by the “Keeping Up With The Kardashians” star.

The very next day, multiple reports went up speculating about who the “KUWTK” star should sleep with date next with offerings like Joe Jonas and Justin Bieber. Those guys are cool and all but hardly Kylie’s style. Jenner proved that point on Friday night when she was seen leaving The Nice Guy with A$AP Rocky.

Now it’s looking like Kylie and Tyga may have kissed and made up. On Saturday, Kylie posted a picture on SnapChat and it looks like Tyga may be back in her arms, literally. The picture showed what we are assuming is Kylie’s leg since the photo was shared from her account.

Next to her we can see Tyga’s leg and arm. Tyga is identifiable by the telltale watch and tattoos on his hand. The picture was captioned to say, “Everyone needs to chill.” Kylie obviously wants the barrage of breakup rumors to stop because she’s obviously still with Tyga to some degree if they are taking pictures together.

So if Tyga and Kylie are back together now and the squabble is over, we still haven’t figured out exactly what caused their fight to begin with. It’s undeniable that something happened between the reality star and her rapper boyfriend because there is no other way that Kylie would miss Tyga’s 26th birthday and not a single member of her family would mention it either.

According to the rumor mill, Kylie freaked out on Tyga when she got back from Melbourne, Australia and checked his personal computer. We suppose that’s a good enough to ice the “Rack City” rapper out on his birthday. It seems all may be forgotten though if Kylie Jenner let Tyga have another chance…again.

So far no other pictures have been shared on either social media accounts that would confirm that Kylie and Tyga are back together or if they have split and neither are speaking about the breakup reports.They’re probably too busy making up and we’ll be hearing from the rest of the Kardashian – Jenner family about how much they disapprove of Kylie and Tyga’s reunion.