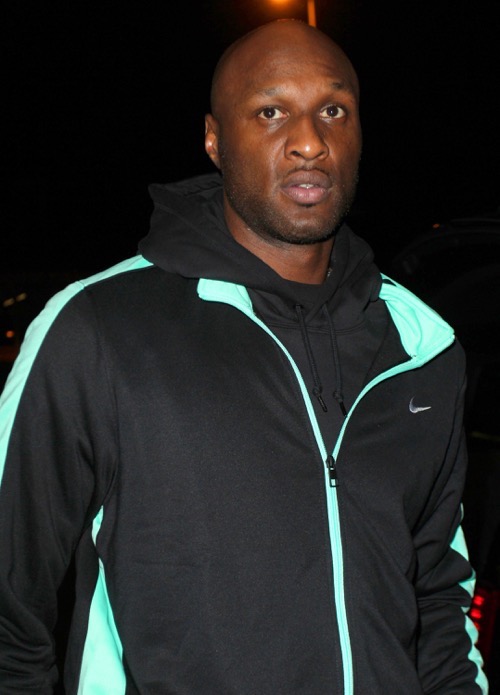 Did Lamar Odom attempt suicide with a drug overdose? It appears the question of whether or not the Kardashians played a role in breaking down Khloe Kardashian’s husband might have an answer. Lamar Odom’s prostitute and drug bender might have turned into a suicide attempt. Nye County Sheriff, Sharon Wehrly, has confirmed the possibility Odom overdosed on purpose.

The former NBA star arrived at Las Vegas brothel, over the weekend to party by himself. Initial reports claim Lamar showed up solo – no entourage – and spent the weekend in a VIP suite. Witnesses said Odom was very “chill” and seemed to be in good spirits.

Dennis Hoff, owner of the brother, explained, “He (Lamar) said he just trying to get away from people so he could have some time to himself without the pressure of being who he is.” Hof also confirmed Lamar was using an herbal Viagra and had ordered a bottle of cognac during his time at the brothel. On Tuesday, Lamar was discovered unconscious in his suite.

Developing reports soon confirmed Lamar had cocaine in his system after one of the prostitutes discovered Lamar Odom unconscious and foaming at the mouth. Since the basketball star turned troubled Kardashian was taken to the hospital, his organs began failing and Odom suffered multiple strokes. Rumors currently state that Lamar Odom has likely suffered brain damage and his chances of surviving are very slim – around 50/50 odds.

The turning point – according to multiple employees, witnesses, and Dennis Hof -, was a phone call that alerted Lamar to the fact that he was on the latest episode of ‘Keeping Up With the Kardashians.’ After a phone call he had with Khloe was shared on the show, Kim Kardashian scolded her sister for being flirty with Odom.

Khloe then voiced her concern Lamar was going to spin out of control again. Needless to say, the Kardashians were banking on his Lamar Odom’s personal drug battles to make good drama for their KUWTK reality show.

From that moment, Lamar’s mood reportedly shifted. His attitude drastically changed and he was soon discovered unconscious in his suite. Is it possible Lamar Odom tried to commit suicide? The Sheriff confirmed she isn’t ruling out the possibility. According to several sources, Lamar had “a significant amount of cocaine” in his system.

Perhaps it was a bender that turned into an accidental overdose, but the Kardashians are facing a ton of criticism. Friends of Odom claim Lamar had begged Khloe to stop filming their phone calls and airing them out on ‘Keeping Up With the Kardashians’ and obviously Khloe continued to ignore Odom’s pleading for privacy.

What do you think of the Kardashian’s role in Lamar Odom’s condition? Did Lamar Odom try to commit suicide or was it just an accidental overdose? Let us know your thoughts in the comment section below.

Do you want to keep up-to-date on all the Lamar Odom News?  Head over here for all the Latest & Breaking news on Lamar!