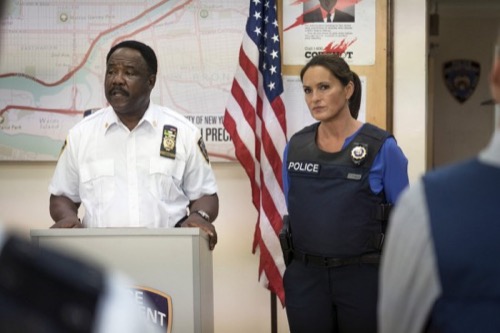 Tonight on NBC Emmy Award-winning producer Dick Wolf’s crime drama, Law & Order: SVU airs with an all Wednesday October 14, season 17 episode 5 called, “Community Policing.” On tonight’s episode, in the pursuit of an SVU rape suspect, detectives from another precinct shoot and kill an unarmed black man. As racial tensions rise in the city, Barba (Rachel Esparza) is tasked to indict three officers who claim they had no choice but to follow police procedure.

On the last episode, a starving toddler found wandering the streets alone lead detectives to the home of Manuela Ozuna (guest star Jessica Pimental) and another child in grave condition. The police questioned Department of Child Services caseworker Keith Musio (guest star John Magaro), whose vague and backdated reports on the family suggested he hadn’t checked on the children in months. When the overworked Keith accused his supervisor, Janette Grayson (Goldberg), of orchestrating the false reports, Chief Dodds (guest star Peter Gallagher) promised to conduct an internal investigation. But when neglect lead to death, Barba (Rachel Esparza) took matters into his own hands and arrested them for manslaughter. Meanwhile, Dodds indicated some changes coming to Benson’s (Mariska Hargitay) squad. Did you watch the last episode? If you missed it, we have a full and detailed recap right here for you.

On tonight’s episode as per the NCB synopsis “in the pursuit of an SVU rape suspect, detectives from another precinct shoot and kill an unarmed black man. As racial tensions rise in the city, Barba (Rachel Esparza) is tasked to indict three officers who claim they had no choice but to follow police procedure. Starring Mariska Hargitay (Sgt. Olivia Benson), Ice T (Det. Odafin Tutuola), Kelli Giddish (Det. Amanda Rollins) and Peter Scanavino (Det. Sonny Carisi).”

Tonight’s season 17 episode 5 looks like it is going to be great and you won’t want to miss it, so be sure to tune in for our live coverage of NBC’s Law & Order: SVU at 9:00 PM EST! While you wait for our recap hit the comments and let us know how excited you are about the new season?

Tonight’s episode of “Law & Order: SVU” kicks off with Olivia and Fin arriving at a crime scene. A woman was raped in her apartment, and when her husband came home from work he was attacked by the assailant. The rape victim Mrs. Harris is lying on the ambulance stretcher – she is badly beaten. She tells Olivia that the attacker was black and tall. All of a sudden Mrs. Harris starts panicking – she realizes that her 12 year old daughter Sophie is missing, and the rapist must have taken her with him. Olivia and her team start searching the entire apartment building and looking for the girl, they think he might still be inside.

Carissi finds Sophie badly beaten and bloody and crammed inside of a washing machine in the basement – she seems to be okay. They rush her to the ambulance and Olivia rides with her to the hospital. At the hospital, Olivia hands Sophie over to Dr. Patel. Olivia says that it was the same rapist that struck last week – and she thinks that he is working for the NYPD.

In an exam room, Mrs. Harris’s husband is giving a description of the rapist. He thinks that he is the “push-in” rapist, apparently his brother is a cop and he warned him about the rapist. He says that the assailant made him watch him rape his wife. Cynthia Harris is in the other room giving a similar description to Carissi and Olivia. The doctor arrives and interrupts to do a rape kit. Doom is working the case since Olivia is short-staffed, he is shocked when he sees that Rollins is pregnant.

Olivia briefs her team and says that there was another push-in rape, the victims are related to a NYPD officer. They share a sketch of the rapist, and they have put flags on the Harris’ credit cards that he stole. Olivia and her team hit the streets with the sketch and no one seems to be able to ID him. Meanwhile, they get a call from a convenient store – the rapist just used the ATM to take cash off from one of Cynthia’s credit cards.

They are only about 10 minutes behind the rapist, and all troops start searching the streets near the store – there is a foot chase and the NYPD even calls in aerial assistance. They pull up to the projects and they hear shots fired. Doom and his partner have shot him to death – they say that he was going for his gun. People in the projects start looking out their windows at the victim handcuffed and lying on the ground bleeding. There is a huge crowd around them, they start shouting that the police shot an unarmed black man. There is no gun on him, and he doesn’t even have the stolen credit cards. Carissi heads upstairs to the apartment to search Terrence’s house – it is looking like they got the wrong guy. There are no stolen credit cards, guns, or traces of evidence that he raped anyone. Terrence’s parents show up at the hospital and are freaking out, they don’t understand why the police would shoot him.

Meanwhile, Doom and the other two cops who shot Terrence are being questioned at the precinct, they all tell the exact same story – and swear that they thought “their lives and their partners lives were in danger.” Tucker is questioning them and he is not happy. He can tell their stories were rehearsed. Olivia shows up with even worse news – she takes Tucker aside and tells him that they just got the DNA test back on Terrence, and he is no the push-in rapist. The NYPD just shot and killed an innocent man.

Of course, the people of New York are up in arms over the fact that the police have shot and killed another innocent black man. Barba gets a very unfriendly visitor from the mayor’s office – he is ordered to “get a head of it” and make sure this doesn’t become another Ferguson. The three cops are going to have to go before a grand jury, and they are going to be suspended until after they go to court. Barba meets with Terrence’s parents and their lawyer. Barba learns that they are going to have a separate investigation – and will be hiring their own crime scene analysts and doctors to examine Terrence’s body.

Rollins goes to the bar to meet up with Doom, he is not taking his suspension well and he is a little drunk. He starts ranting to Rollins that it wasn’t his fault that they shot Terrence – he was cornered and reaching for what looked like a weapon – he didn’t have a choice. Rollins tries to comfort him and tells him that he shouldn’t drive home, she gives him a ride. The next day at work, Declan corners Rollins in the parking lot – he wants to know if it is his baby. She confesses that it is, Declan is a little upset that she didn’t tell him. Rollins points out that he was 4,000 miles away, and reassures him that it is not his problem or his responsibility. She has to go, but she promises that they will talk about this later. Declan gives her his phone number and makes her promise that if there are any problems she calls him ASAP.

Barba and Olivia are in his office, getting ready for the grand jury hearing – they haven’t selected the jurors yet. And, things just got worse for the NYPD police and Doom. Terrence’s parents’ lawyer obtained a crystal clear video of the shooting – and Terrence getting shot 9 times. Terrence was trying to get in to a locked door and he reached in his pockets for his keys, that’s when the police open fire. Even after Terrence got shot the first time, he put his hands up in the air, but the police kept shooting him.

They head in to court, and Terrence’s parents testify that he was a good kid and was in college and working part time at an animal shelter. Terrence’s dad explains that the only reason his son ran was because in their neighborhood black guys get arrested for no reason. Olivia and the NYPD argue that it had nothing to do with Terrence being black, they thought he was armed and dangerous – and had just raped a 12 year old girl. Doom takes the stand – Barba questions him and wants to know why he stopped shooting after 3 shots – and his fellow officers didn’t stop. Doom finally caves and confesses that he realized Terrence wasn’t carrying a gun and that was why he stopped firing.

Now, it is time for the grand jury to vote on whether or not Doom and the other two officers should be charged with misconduct. Barba is shocked when the jury announces that they are indicting the two NYPD officers with murder, and Doom is being charged with wreckless endangerment. Olivia and her team are on edge, everyone goes to the bar after work and begin bickering. Then, they all get called to the hospital – there has been another shooting.