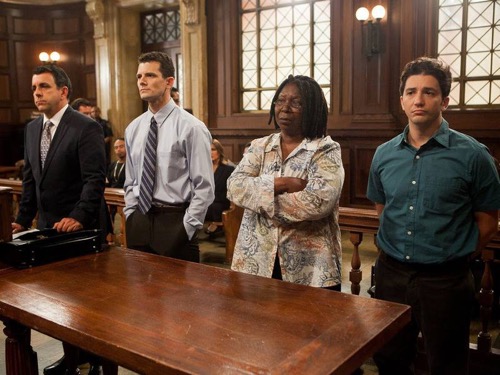 On the last episode, 15 year-old Avery Parker (guest star Christopher Dylan) walked home from school through Fort Tryon Park when she’s surrounded by a group of rowdy boys. Taunts and jokes intensified to pushing and shoving, leaving Avery in the hospital and three assailants under arrest. When the DA’s office decided to try one of the culprits, 15 year-old Darius McCrae (guest star Dante Brown), as an adult, the SVU squad agonized over whether the punishment fits the crime, and had to deal with the pain of both families involved. Did you watch the last episode? If you missed it, we have a full and detailed recap right here for you.

Tonight’s season 17 episode 2 looks like it is going to be great and you won’t want to miss it, so be sure to tune in for our live coverage of NBC’s Law & Order: SVU at 9:00 PM EST! While you wait for our recap hit the comments and let us know how excited you are about the new season?

Tonight’s episode of Law & Order SVU kicks off with a little boy home alone, he can’t be older than 4 or 5. He pulls a chair over to the door and unlocks it and heads outside and across the street in the middle of the night. The little boy goes to a corner store and buys a snack – the clerk calls the police when the little boy won’t tell him where his mom is. Olivia and the Chief are out together when Olivia gets the call – they rush to the store. The NYPD explains that the boy won’t talk – they have no idea who he is or where his parents are.

Olivia takes the little boy to the hospital and tries to talk to him, she can’t get a peep out of him. Finally the little boy tells her that his name is Bruno – the doctor explains that he has delayed speech and no one has been taking care of him, he seems to be neglected. He hasn’t been seeing a dentist and he has low vitamin levels.

The next morning Rollins heads to the projects where Bruno was found – the people outside have confirmed that Bruno lives there, but no one knows which apartment is his. One woman says that she thinks Bruno’s mom’s name is Manuella. Fin finds a drug dealer who says that he sells to Bruno’s mom, he promises to call if he sees Bruno’s mom.

Carissi and Olivia head to CPS, they show the caseworkers pictures of Bruno and they find his file. Olivia explains that Bruno was found wandering the streets last night, the case worker takes them to his apartment. The door is wide open – Olivia and Carissi head inside. They learn that Bruno had a sister named Keisha, they find her locked in a dog cage with a weak pulse and unconscious.

Keisha is rushed to the hospital – she is so dehydrated that her organs are shutting down, and she has multiple infections. She might not make it. Later that night, Fin finds Manuella sitting outside and strung out begging for money. He arrests her and takes her down to the police station. While Rollins and Fin are questioning her – they learn that Keisha died.
Olivia and Rollins meet with the DA, they are furious – they think that they should prosecute the caseworker. If Keith had actually been going to Manuella’s house and visiting the kids, then he would have known that Manuella was not a fit parent and was starving her kids. Carissi and Olivia head down to CPS, the caseworkers swear that they visited the house 2 weeks ago. Olivia wants the caseworker’s laptop – but the commissioner says they need a subpoena.

Olivia and DA Barba visit the Deputy Commissioner, he is furious that Olivia’s team is trying to press charges against DSS. He informs Olivia that this is not a police matter and she and her team have to back off. After they leave Barba scoffs that he doesn’t have to listen to the commissioner – he doesn’t work for him. The next day Barba holds a press conference, he announces that Keisha’s caseworker Keith falsely reported visiting Keisha for four months – and his supervisor Jeanette signed off on the false reports. Jeanette, Keith, and their boss are all arrested and charges with a slew of reckless endangerment charges and child abuse – along with felony murder.

Keith, Jeanette, and the boss all go before the boss for their arraignment. The judges sets their bails each at $50,000. After court, the deputy commissioner corners Olivia and reprimands her for letting the case go to court. He tells Barba that now he has to “plea it out,” before he “gets cut down.”

Rollins and Olivia head to the hospital to check in on Manuella. She says that she was clean and sober until Bruno’s dad got released from prison in May. She says that she hasn’t seen a case worker since Easter. Manuella says that Felippe hated Keisha because she wasn’t his daughter, and he bought the cage and put Keisha in it. Felippe got shot on 4th of July weekend and died and Manuella fell off the wagon after that and stopped taking care of her kids.
Carissi gets a phone call from prison, Keith is ready to talk. He sits down with Carissi and Barba and says that Jeanette and Matt told him to “stop coddling his clients” and he didn’t have to go to every visit. He says Jeanette and Matt called him in to work on the Saturday that Keisha died – they filed hundreds of false reports for all of the cases, including Keisha’s, to cover their own backs.

They head to court and the doctors from the hospital testify about how malnourished Keisha and Bruno were. Then, Keith takes the witness stand and testifies that his bosses Jeanette and Matt told him to falsify documents, and at one point they even put him on probation because he was spending too much time with his clients. Jeanette takes the witness stand and Barba accuses her of caring more about her career than the kids – she snaps and starts ranting that God couldn’t even do her job.

Jeanette winds up having a complete breakdown and lands in a mental hospital, Matt is sentenced to a year in prison. Carissi visits Keith in prison to check in on him, he will be getting out soon – but he is devastated that he won’t be able to work with kids again. Olivia is shocked to learn that after she took on DSS, she is still getting promoted to lieutenant – but she will have to work with the Chief’s son underneath her as her Sargent to keep an eye on her.