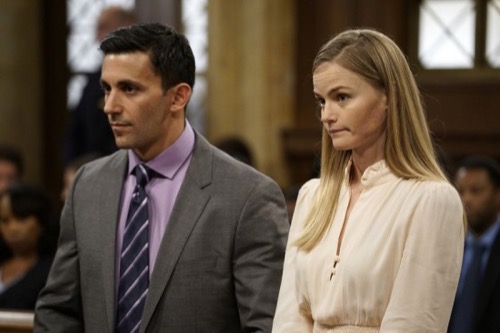 Tonight on NBC Emmy Award-winning producer Dick Wolf’s crime drama, Law & Order: SVU airs with an all Wednesday October 21, season 17 episode 6 called, “Maternal Instincts,” and we have your recap below. On tonight’s episode, a violinist is raped by her colleague, who doesn’t remember committing the crime and claims he was drugged and robbed by a hired escort.

On the last episode, in the pursuit of an SVU rape suspect, detectives from another precinct shoot and killed an unarmed black man. As racial tensions rise in the city, Barba (Rachel Esparza) was tasked to indict three officers who claimed they had no choice but to follow police procedure. Starring Mariska Hargitay (Sgt. Olivia Benson), Ice T (Det. Odafin Tutuola), Kelli Giddish (Det. Amanda Rollins) and Peter Scanavino (Det. Sonny Carisi). Did you watch the last episode? If you missed it, we have a full and detailed recap right here for you.

On tonight’s episode as per the NCB synopsis “a violinist is raped by her colleague, who doesn’t remember committing the crime and claims he was drugged and robbed by a hired escort. Meanwhile, Rollins’ mother throws a baby shower for her; and Sgt. Mike Dodds reports to work at the SVU squad.”

Tonight’s season 17 episode 6 looks like it is going to be great and you won’t want to miss it, so be sure to tune in for our live coverage of NBC’s Law & Order: SVU at 9:00 PM EST! While you wait for our recap hit the comments and let us know how excited you are about the new season?

Tonight’s episode of Law & Order SVU kicks off with a band performing live on a stage at a nightclub. Meanwhile, Olivia and her team are all at Amanda’s baby shower – her mother is in town and pounding drinks and embarrassing her. Back at the club, Anton hops off the stage after his performance and hits the bar – he meets a girl named Savannah that he met online and raves that she is prettier than her picture. She invites herself up to his hotel room, and robs Anton after they have sex and he is passed out in bed. She takes his cash and his flute before she dashes out of the hotel.

The next day everyone heads to the precinct – they aren’t impressed with their new sergeant, Dodd’s son Mike. A call comes in, a woman named Alessandra was assaulted in her hotel room last night – she is a part of Anton’s band. Olivia and Mike head to Alessandra’s hotel room, she says that she heard banging on the door late last night, she opened it and a guy charged in and attacked her. She says that the guy threw her on the floor and raped her and beat her – then she passed out. Alessandra says that it was her bandmate Anton that raped her.

Carissi and Fin head to Anton’s hotel room, he says that he called 911 because someone broke in to his room and robbed him and stole his $50,000 flute. He agrees to come down to the police station and explains to the police that he met a fan at the bar named Savannah, they had a drink in his hotel room with her and then he passed out and woke up and his flute was missing. Carissi and Fin tell Anton that Alessandra is accusing him of raping her, he is shocked and says that is impossible.

Mike gets security footage from the hotel – sure enough Anton was banging on Alessndra’s door in the middle of the night. But, he was stark naked and completely out of it, it looks like he was drugged. They decide to test his blood for drugs. Meanwhile, Amanda gets a lead – someone tried to sell Anton’s flute at a local pawn shop. She sits down at her desk to look at the security footage from the pawn shop and freaks out when she realizes that it is her little sister Kim trying to sell the stolen flute. She lies and tells Fin that she couldn’t get the file to open.

Fin can tell that Rollins is lying, they head to the break room and she secretly shows him the video footage on her phone. He tells her that he needs to tell Olivia, Rollins begs Fin to stall them and says that she is going to go get her mother and track down her sister and bring herself in. Fin agrees and covers for Rollins, meanwhile Dodds and Olivia are trying to track down the hooker named Savannah.

Rollins calls her mom and demands to know where Kim is – her mom tries to lie and say that she has no idea where Kim is. Amanda tells her mom that she robbed a john last night, and she needs to turn herself in ASAP. After they hang up, Amanda’s mom asks Kim (who is sitting right next to her) if she is in some sort of trouble. Kim lies and says that Amanda is just trying to “bring her down.”

Rollins meets up with Kim and tells her that she is in big trouble – the guy that she drugged raped another woman after she left and they have her on video footage selling the flute. Rollins’ mom shows up and tries to get them to stop fighting. Rollins snaps and shouts at her sister that there is a warrant out for her for manslaughter, Kim laughs in her face and reminds Rollins that she is the one who shot her boyfriend. Kim gets up and leaves, and dares Rollins to pull her gun on her and stop her. Amanda shouts back at her that the police are going to find her one way or another.

Mike Dodd has been working hard on tracking down Savannah/Kim, he has been questioning her pimp for hours. Olivia says it is a waste of their time, they got the DNA test results back and there is no doubt that Anton raped Alessandra. It’s not their job to find out who drugged Anton – it’s their job to charge Anton with rape. Meanwhile, Olivia realizes that Rollins and Fin are hiding something, they confess to her that Amanda’s sister was the one that drugged Anton and robbed him.

Dodd does some investigating of his own and he puts two and two together and gets a picture of Savannah – he realizes that she is Rollins’ sister. They bring in Rollins’ mom and she admits that Kim is back at Amanda’s apartment. The police rush there to arrest her, and arrive just in time as she is running out the front door. Kim says that there is a man upstairs and he tried to attack her. While Olivia is arresting Kim, Fin and Carissi head upstairs – they find Kim’s pimp “Slice” lying on the floor covered in blood, he cries to them that Kim “stabbed him in the nuts.”

When they arrive at the police station, Kim lawyers up. She claims that she stabbed “Slice” in self-defense. Then, she says that Anton was not a john – they met online and went on a real date and he gave her the flute as a gift. Kim lies and says that Anton took drugs by himself. Meanwhile, Anton heads to court and his bail is denied – whatever drugs Kim gave him were undetectable in his drug test. Next Kim goes up in front of the judge, she flirts with her lawyer and convinces him not to take the plea deal and to plead not guilty for her on all charges.

After court, Amanda gets in a fight with her mother. Amanda’s mom says that it is all her fault Kim is going to jail – and she set her up and turned on her own family. She announces she is going home, and isn’t staying to help Amanda with the baby. Amanda is obviously shocked – after her mother storms off, she starts to faint. Fin catches her and the team rushes her to the hospital. Fin and Carissi wait in the waiting room until Amanda gets out – the doctor says that she is fine and the stress just made her blood pressure spike.

The next day Amanda stops by the jail to visit Kim on her way to work. Kim taunts her, and tells her that her lawyer is planning on airing all of her dirty laundry in the trial – that she was raped, her gambling addiction, and that she lied about ID’ing her sister…she says that her lawyer is going to get a “1 size fits all plea” and get her out of jail in less than a year.