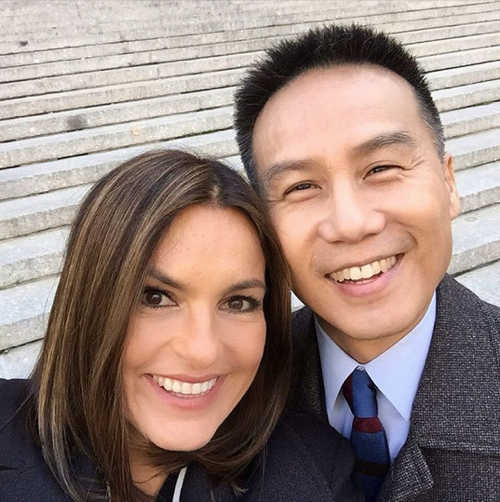 Tonight on NBC Emmy Award-winning producer Dick Wolf’s crime drama, Law & Order: SVU airs with an all Wednesday November 18, season 17 episode 9 called, “Depravity Standard,” and we have your recap below. On tonight’s episode, a child abductor’s trial gets complicated when a plea deal is rejected.

On the last episode, the detectives looked for a teenage girl who was abducted and find crucial DNA evidence about her kidnapper. As the search progressed, the case deeply affected Sgt. Dodds. Did you watch the last episode? If you missed it, we have a full and detailed recap right here for you.

On tonight’s episode as per the NBC synopsis “a child abductor’s trial gets complicated when a plea deal is rejected, so Barba is forced to use evidence that is decades old, leading to a confrontation between him and former SVU colleague Dr. Huang.”

Tonight’s season 17 episode 9 looks like it is going to be great and you won’t want to miss it, so be sure to tune in for our live coverage of NBC’s Law & Order: SVU at 9:00 PM EST! While you wait for our recap hit the comments and let us know how excited you are about the new season?

Tonight’s episode of Law & Order SVU kicks off with video footage of Olivia with a suspect named Hodda – she is trying to get him to confess to a crime in the interrogation room. He confesses to killing a man named Hector Ramirez, and snapping his neck – then hiding him under a concrete slab so his mother didn’t find the body.

Olivia meets with Wyatt and Hector’s mother – they are going to need Wyatt to testify against Hodda in court. Hector’s mom is furious, they aren’t going to to charge Hodda with Hector’s murder because it happened 16 years ago and they have no evidence other than his confession. Wyatt’s mother announces that her son is not going to testify – which means that HOdda could walk. Without a confession the only real evidence they have is Wyatt’s testimony.

Barba and Carisi head back to court and bump in to Lisa Hassler – she will be acting as Hodda’s defense. Lisa is trying to get Hodda set free on “time served” since he has been in prison for three years already. The judge rules that in Hodda’s murder case for Hector, they can’t bring up Wyatt’s kidnapping since they are unrelated.

Back at the police statin, Olivia and Fin are scrambling to try and find evidence that they can use in Hector’s murder case. There was a crazy auxiliary cop named Lomatin that new Hector before he was murdered, he helped with the case three years ago, but Fin says that he is “nuts.” Fin and Carisi track down Lomatin, he says he never actually saw Hector with Hodda, but he offers to lie on the stand if they need him to.

The next day in court Hector’s mother takes the stand and describes the last day that she saw her son Hector alive – he was missing for years before they found his remains in the basement of the building that Hodda managed. Hassler cross-examines Hector’s mother, she makes it seem like Hodda is a scape goat and Hector’s mom Delores just needs someone to blame for her son’s murder. Afterwards, Barba preps Olivia for her turn on the stand. They are bickering over Olivia being too emotional, Barba is afraid that she could blow the case when she gets on the witness stand if she doesn’t get her emotions in check.

Back in court, Barba plays Hodda’s confession to killing Hector for the jury, then Olivia reassures the court room that no one in the interrogation room forced him to confess. Hassler gets up to cross-examine Olivia, Hassler points out that she interrogated Hodda for over six hours before they turned on the video camera. Hassler reveals that Olivia lied to Hodda about non-existent witnesses before he confessed, and threatened Hodda that he would be assaulted in prison because he was a child molester.

Hodda takes the stand next, he sobs that he only confessed because Olivia threatened to have him killed in prison. He swears that he didn’t murder Hector, and he had never saw him before in his life. Barba gets up and questions Hodda, he tries to rattle him and talks aabout how much he likes “little boys.” Hodda screws up and basically admits that he “touched” Hector – but not that he “touched him down there.” After court, Barba is feeling pretty cocky – he thinks that they have the case in the bag and there is no way the jury won’t think Barba is guilty.

The next day in court Dr. Wuang takes the stand – he gives a psychological assessment of Hodda, and says that he was beaten and abused as a child and he is delusional. Wuang testifies that if Olivia planted an idea in Hodda’s head, he might believe it, because she was in a position of authority.

The next day in court, things get worse. Lomatin takes the stand and Hassler is trying to pin Hector’s murder on him. She points out that Lomatin was the one who figured out where Hector’s body was hidden. The police found photos of Hector in Lomatin’s attic, and he has been visiting Hector’s mother for the past 16 years, also he is on anti-psychotic drugs. Lomatin gets frazzled on the stand, and the jury definitely takes notice. After closing arguments, the jury heads off to deliberations to decide whether or not Hodda is guilty or not guilty of Hector’s murder.

The jury has been deliberating for five days, and still has no verdict. They finally head back to the court room and learn that the juror’s still haven’t made a decision – they are arguing over whether or not Hodda’s confession was legal. Apparently, the jury thinks that Olivia was too cruel to Hodda. After court, Olivia gets a phone call from Fin, he is at the hospital with Rollins and she is having complications with her pregnancy.

The next day, Lomatin tracks down Barba, he reveals that he stalked one of the jurors and found out that they lied in court and have an arrest record – apparently he hates cops. Barba tells Lomatin that it is irrelevant, the case has already gone to jury and they can’t contest any one the jurors now. After court, Hassler meets with Barba, she offers a plea deal. They are sick of waiting on the jury – Hodda will plead guilty to criminally negligent homicide and only serve 8 years. Barba agrees to the plea deal and they meet with the judge tomorrow. The judge reveals that the jury is dead-locked, so Hassler announces that the deal is off.

The next day in court the jury announces officially that they are dead-locked, the judge calls a mistrial, Hodda will go back to prison until the state decides how they would like to proceed with the case. After court, Olivia pressed Barba and says that they have to retry Hodda, they can’t just let him walk. Later that night there is a candle lit ceremony for Hector in the street, Olivia and the crew attend – along with Lomatin and Barba. Olivia brings Wyatts mother along – she announces that they are going to cooperate and Wyatt will take the stand and testify so that they can put Hodda away for good.