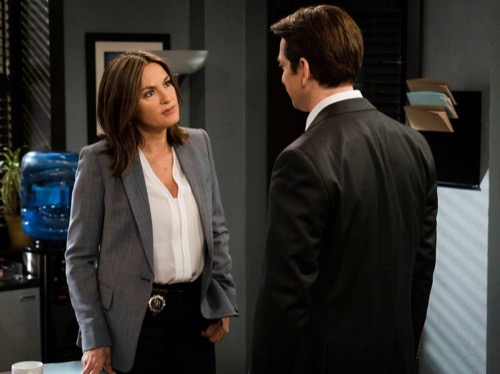 Tonight on NBC Emmy Award-winning producer Dick Wolf’s crime drama, Law & Order: SVU airs with an all Wednesday November 11, season 17 episode 8 called, “Melancholy Pursuit,” and we have your weekly recap below. On tonight’s episode, the detectives look for a teenage girl who was abducted and find crucial DNA evidence about her kidnapper.

On the last episode, the SVU investigated an unraveling web of secrets when the virtuous 13 year-old daughter of a famous reality TV family discovered she’s pregnant. Did you watch the last episode? If you missed it, we have a full and detailed recap right here for you.

On tonight’s episode as per the NBC synopsis “the detectives look for a teenage girl who was abducted and find crucial DNA evidence about her kidnapper. As the search progresses, the case deeply affects Sgt. Dodds.”

Tonight’s season 17 episode 8 looks like it is going to be great and you won’t want to miss it, so be sure to tune in for our live coverage of NBC’s Law & Order: SVU at 9:00 PM EST! While you wait for our recap hit the comments and let us know how excited you are about this season?

Tonight’s episode of Law & Order SVU kicks of with Olivia at the park with her son Noah, she makes friends with another mother at the park who gushes about how adorable her son is. While Olivia is getting ready to leave – she sets Noah down for a moment, to pick up her bag and he disappears. Olivia starts frantically searching the park and screaming his name. The other mom is about to call the police and Olivia finds him playing in the sandbox – safe and sound.

Meanwhile, Fin and Carissi are at Mr. and Mrs. Evans’ house – they called the police because their daughter Lily didn’t come home from school. They called the school and learned that she had never showed up that morning. Lily left home around 6:15 AM, and hasn’t been saw since. Carissi looks through her I-Pad and finds that she was texting photos of her self in a bikini to an older looking guy named Diego. Her parents insist that their daughter doesn’t know Diego – but they obviously don’t know very much about their daughter.

Carissi has Lily’s “boyfriend” Peter come in to the station for questioning, Peter says that he really likes Lily – but she friendzoned him. Peter has been worried about Lily because she keeps cutting class and coming to school smelling like cigarettes and weed. Apparently, Lily was determined to be a “cool girl” in school, and she has been crashing frat parties on the other side of town.

Carissi and Fin head over to the frat house, and they meet Diego – he is apparently a drug dealer. Diego swears that he stopped talking to Lily when he learned that he was 15 years old. They bring him in for questioning, but Diego’s alibi checks out, and he isn’t their guy. Olivia says that Lily has been missing 16 hours now – and to keep questioning Diego to see if he knows anything about where Lily might be.

Police officers call Olivia, they found Lily’s bag under West Highway and a homeless man was trying to use her debit card at the store. He took the cops back under the bridge to show them where he found the bag and the debit card. The police began searching the area – dogs and all. Carissi finds what appears to be a body wrapped in a quilt. Dodds gets queasy as Carissi unwraps the body – it’s definitely Lily and she is definitely dead.

Back at the morgue, the examiner says that there was no evidence of sexual assault but her clothing was torn and there was some semen on her thigh. Lily died from blunt force trauma to the head – she slowly blead out. Lily’s time of death was between 4:00 and 8:00 PM. Dodds is upset, that means that when they were at Lily’s house with her parents, Lily was still alive and they could have saved her if they found her sooner. Meanwhile, Carissi is in the interrogation room with the homeless guy that found Lily’s debit card – and he has a rock solid alibi too.

The medical examiner, Melinda has more news – she says that she found DNA in the system that “sort of” matches the semen on Lily’s leg. The DNA matches Brendan Cahill, and Lily’s killer is a close male relative of his. Carissi and Fin pay Cahill a visit, they ask him for a list of all of his male relatives. Brendan explains that he was adopted, he has no idea who his male relatives are. All Brendan has is his birth mother’s address and he willingly hands that over. Olivia and Carissi pay Brendan’s birth mother a visit – they explain that they are looking for Brendan’s birth father to help solve a murder case. Apparently, Brendan’s birth father is dead, but his name was Ray Moreno. Brendan has two half brothers named George and Robbie Moreno.

Olivia and her team track down Robbie and George. Robbie is a moving man, and he was arrested two years ago for sexual assault. The blanket that Lily was found wrapped in matches the same blankets that Lily was found wrapped in. Meanwhile, Robbie’s brother George is singing like a canary – he admits that his little brother tends to make “stupid decisions.” George says that his brother is lying, and he has no idea where he was all night.

After 6 hours in the interrogation room, Robbie cracks and confesses to killing Lily. Then they learn that he was faking it, Melinda comes down to the precinct with the DNA test results and says that neither of the brothers are a DNA match to the killer – but they are related to the killer. They dig up their father’s grave and verify that the killer is another one of Ray Morena’s sons. Apparently he had four sons. He had Brendan, his two sons with his wife Robbie and Georgie, and then another son much younger than them.

Olivia and Dodds pay Rays wife a visit. She is livid – she shouts at them that her husband never cheated on her, and he only had two sons. George is there, after his mother goes inside, he explains to Olivia and Dodds that his dad Ray was a bit of a player, and a charmer. He was a bus driver in Manhattan and was always flirting with women on his route. George says that there was one woman named Stella he remembered, she had twins and Ray took George to a carnival and she was there with her kids. He says that it was 25 years ago – but Stella worked at the museum them.

Olivia and Dodds track down Stella, she confirms that the twins were Ray’s sons. But, Nicholas died in a car accident 10 years ago. Stella reveals that she wasn’t the only woman sleeping with Ray – her best friend Helen was cheating with him too, and she has three sons. Stella says that one of Helen’s sons might actually be Ray’s son. Now, Ray Moreno is up to four baby-mamas. She refuses to confirm that she was cheating with Ray, or that any of her kids could be his.

Carissi and Dodds decide to go undercover, they set up a road block on Sunday right by Helen’s house. All three of her sons come for dinner, and drive through the road block. They get all of them to blow through a breathalyzer. After they send the DNA to the lab – they learn that Helen’s son Gary Ryan is Lily’s killer. The next day they head to his job to arrest him and bring him in. Gary tries to make a run for it, but Dodds chases him down and cuffs him, and arrests him for Lily’s murder.

Back at the police station Gary breaks down in tears, he says that he saw Lily every day and waved to her. Then, she got in his van and asked him for a cigarette. After they talked, he tried to kiss her and Lily started screaming. Gary shook her to make her stop and she hit her head in the back of the van. Then he drove around for a few hours and he was going to let her go when she woke up. But she never woke up. When Gary realized she wasn’t breathing, he wrapped her in a blanket and left her under the bridge. Olivia and Dodds pay Lily’s parents a visit at their home and explain what happened to their daughter so they can have some closure.