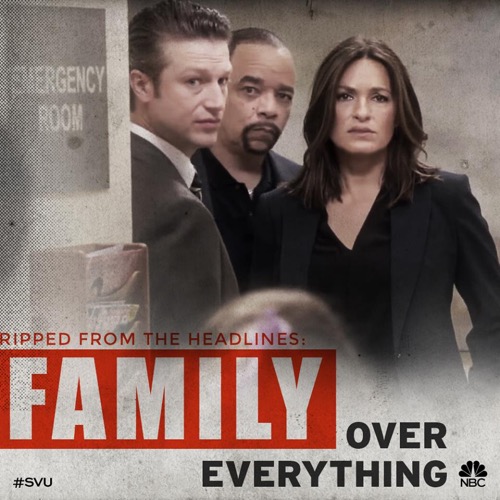 Tonight on NBC Emmy Award-winning producer Dick Wolf’s crime drama, Law & Order: SVU airs with an all Wednesday November 4, season 17 episode 7 called, “Patrimonial Burden,” and we have your weekly recap below. On tonight’s episode, the SVU investigates an unraveling web of secrets

On the last episode, a violinist was raped by her colleague, who didn’t remember committing the crime and claimed he was drugged and robbed by a hired escort. Meanwhile, Rollins’ mother threw a baby shower for her; and Sgt. Mike Dodds reported to work at the SVU squad. Did you watch the last episode? If you missed it, we have a full and detailed recap right here for you.

On tonight’s episode as per the NBC synopsis “the SVU investigates an unraveling web of secrets when the virtuous 13 year-old daughter of a famous reality TV family discovers she’s pregnant.”

Tonight’s season 17 episode 7 looks like it is going to be great and you won’t want to miss it, so be sure to tune in for our live coverage of NBC’s Law & Order: SVU at 9:00 PM EST! While you wait for our recap hit the comments and let us know how excited you are about this new season?

Tonight’s episode of Law & Order SVU kicks off with footage from a reality TV show called “Bakers Dozen.” Frank and Pam’s 13 year old daughter Lane is making a purity pledge and vowing to save herself for marriage. Afterwards the whole family heads to NYC for Lane’s big purity ball. All of the fathers escort their daughters to the ball and they share a father/daughter dance. Lane’s older sisters are all there to support her, they took their purity pledges when they were Lane’s age too.

The cameras are rolling and Frank and Lane are dancing on the ballroom floor – and Lane faints. She is rushed to the hospital in an ambulance. Olivia arrives and Fin and Carrisi brief her on the reality TV family and Lane’s purity pledge, and then they reveal that the 13 year old is three months pregnant. The media is about to have a field day.

Olivia and Fin talk to Lane’s parents – they don’t want the police to talk to their daughter. She doesn’t even know that she is pregnant though. Olivia tries to explain to the parents that a 13 year old being pregnant is a crime. Frank and Pam explained that their daughter hasn’t been alone with any boys and she is homeschooled. The family’s pastor arrives at the hospital – he says that the local authorities are going to handle it and promises to contact the Allenville police department when they get home.

Olivia and her team heads back to the police station. Dodds doesn’t understand why they are hounding the family, he explains that religious communities are closed ranks, and they don’t like outsiders. Olivia doesn’t want to hear it though. Rollins looks up Lane’s blog, and learns that she was in Harlem during July – the time that she would have gotten pregnant, so technically the crime was committed in NYPD’s jurisdiction.

Fin and Dodds head back to the hospital, but Lane has already checked out. They track Pam and Frank down at their hotel, they are getting ready to leave town. Fin and Dodds explain that Lane most likely got pregnant while they were in Harlem on a mission over the summer. They convince the entire family to come down to the police station. Carrissi tries to keep all of the kids busy while their parents are being questioned. Carissi takes her older brother Graham aside – he confirms that he was in Harlem with Lane in July, but he tells Carissi that he isn’t allowed to talk about it.

Olivia sits down alone with Lane, she cries that she made a promise to never tell on the person that she had “sexual activity” with. Olivia convinces her that she won’t be telling on him if she writes his name down instead of saying it out loud. Lane says that she had sex with Pete Matthews – the camera man for their reality TV show. Fin and Carrisi get a warrant and head out to track down Pete, they demands a DNA sample and commandeer all of his camera equipment and the footage that he has shot.

Lane’s parents are shocked when they hear that Pete Matthews raped their daughter. Olivia presses Pam to let them do an amnio DNA test. Pam refuses – she doesn’t want any invasive procedures done on Lane, and she doesn’t want to risk the baby’s life. Olivia warns her that if they don’t do the DNA test, they wouldn’t be able to charge Pete and he will have to go to trial.

Meanwhile, Carissi and Fin are questioning Pete in the interrogation room. They threaten to charge him with child pornography because he has some footage of the girls changing their clothes. Pete reveals that he can’t get Lane pregnant, he had a vasectomy 10 years ago. He shows them some footage of Lane’s 15 year old brother Graham – apparently he used to like to grope his sisters three years ago. Pete explains that his parents knew about it, and they hid it, and sent Graham away to a reform school.

Carissi and Fin head out to Allenville to talk to the local judge – he says that he did send Graham to the reform school, but he did it as a pastor, not as a judge. The judge refuses to give them any information, and the police station has no records of the incident. Ironically, the family’s lawyer is also a pastor and he refuses to cooperate too. Fin and Carissi are getting ready to leave and they get pulled over by a cop for speeding. The cop says that he is just going to give them a warning and hands them a piece of paper before he drives off. It turns out the cop is not a fan of the Baker Family – and he gave them a copy of Graham’s juvie record, which was sealed by the judge. There were multiple complaints of forcible touching and harassment to the Allenville police about Graham, but the town elders are hiding it.

Back at the police station, Olivia tells Lane’s parents that they know Pete didn’t rape her. And, they also know about Graham’s past. Olivia and Fin want to speak to Graham ASAP. The pastor reveals that they sent Graham on a mission to Ecuador a few hours ago. They cant extradite Graham from another country unless they have proof that he raped Lane, and they won’t let them do a DNA test on Lane.

Rollins has another theory – she has been watching all of the seasons of the reality TV show. Rollins thinks that 2 year old Tate was actually 15 year old Summer’s son, not Pam’s. Because they hardly ever showed Pam while she was pregnant, and Tate’s birth was the only one that wasn’t aired on TV. They have a working theory that Graham also raped his sister Summer, and they had a son together – who Pam is raising as her own son.

They still need a DNA test though. Carissi and Rollins take his coat to the lab because Tate drooled on it when he was watching him at the station. The lab tech says that Tate’s mother is definitely related to Pam – but there is no sign of the father’s chromosome. She doesn’t think that Tate is the product of incest. While they are trying to make sense of it, Rollins doubles over in pain. She says that “something is not right with the baby.”

Rollins is rushed to the hospital – Carissi stays by her side. The baby is okay, and she is not in labor. Rollins is freaking out though because the doctor is putting her on bed rest and she can’t work any longer. Carissi tries to comfort her, but she starts to panic and cry – she doesn’t think that she is going to be a good mother. He reassures her that she is going to be a great mom.

Olivia and her team rush to Allenville to arrest Pastor Eldon – when they arrive he is in the process of marrying Lane. Apparently, Lane turned 14 years old, and it is legal to marry a 14 year old in Pennsylvania if you have their parents’ permission. Pam and Frank are thrilled – they tell Olivia that they know he will take great care of their daughter.

Olivia tells Pam and Frank that Graham isn’t the one who raped their daughters – it was Pastor Eldon’s. Lane’s parents are shocked, they thought that Graham confessed to raping his sisters, Pastor Eldon lied to them. Pam freaks out when she puts two and two together and realizes that Pastor Eldon raped their daughters. She tells Olivia to arrest him – they are all going to testify in court. They don’t care about their reality TV show or if it will get cancelled, they won’t Pastor Eldon to pay for what he did. The cops haul Eldon away and Carisi scoffs that he is a “piece of crap.”