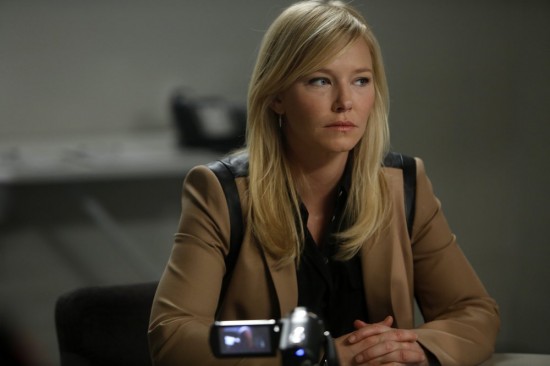 Tonight on NBC Emmy Award-winning producer Dick Wolf’s crime drama, Law & Order: SVU continues with an all new Wednesday February 11, season 16 episode 14 called, “Decaying Mortality” and we have your weekly recap below. On tonight’s episode, a woman launches a video game amid death threats in the male-dominated gaming community, but a crime scene unfurls at a big video-game convention when one of her female employees is assaulted.

On the last episode, Amaro’s father, Benson (Mariska Hargitay) and Rollins (Kelli Giddish) found a teenaged girl crying in the street, her clothes torn. Jenna Davis (guest star Haley Lu Richardson) said she was raped in a pizzeria bathroom by Jerome Jones (guest star Kamal Bolden). Jones had a criminal recorded as well as a pending lawsuit against the NYPD, but with little evidence to go on, the SVU releases him until an arrest can be made. With emotions running high, Jenna’s father (guest star Jamie McShane) takes the law into his own hands with a decision that changed their lives forever. Also starring Ice-T (Det. Odafin Tutuola), Danny Pino (Det. Nick Amaro), Raul Esparza (ADA Rafael Barba) and Peter Scanavino (Det. Sonny Carisi). Also guest starring Paul Adelstein (Dr. Neil Alexander), Eva Kaminsky (Marcy Davis) and Jason Cerbone (Counselor Desappio). Did you watch the last episode? If you missed it, we have a full and detailed recap right here for you.

Tonight’s season 16 episode 14 looks like it is going to be great and you won’t want to miss it, so be sure to tune in for our live coverage of NBC’s Law & Order: SVU at 9:00 PM EST!

Tonight’s episode of Law & Order SVU kicks off with Olivia visiting Dr. Linstrom – they haven’t seen each other in a while. Olivia gushes to Lindstrom about life at home raising baby Noah, she tells him a story about a play date from hell where Noah split his lip open, and leveled all the books on a bookshelf. She confesses that she is scared that his history will effect how he behaves when he grows up.

Rollins, Carisi, and Fin head to a video game convention. They see Leslie, the man that created the cartoon “Glasco Man” that inspired the two girls to stab their little sister. Apparently someone turned “Glasco Man in to a video game.” Meanwhile, a girl heads to the bathroom and two men follow her and assault her – they scream at her that they don’t want her at the convention. Outside the crowd is cheering and watching a video game on the big screen so they don’t hear the girl screaming. Leslie runs and gets Rollins and says that someone is in trouble in the ladies room. She helps the girl out of the bathroom stall and she has bruises all over her and a bloody lip – she explains to Rollins that guys can’t stand female gamers.

The girl, Sarah Keller, heads to the police station with Rollins and she and Fin fill Olivia in on what happened. Carisi stays behind at the convention to get some security tape footage. Olivia and Fin sit down with Sarah to question her. Sarah has no idea who the men were, she says they were “young, pale, white, and skinny.” She explains that they came by her booth a few times and were “talking shit” about her boss Rena – who created an “Amazonian Warrior” video game. It is set to launch on Tuesday – and men are getting crazy about it online.

Carisi shows up with the security footage and it shows the two men, but they are wearing hats and they can’t ID them. Rollins and Fin head to Sarah’s boss’s office to meet Rena, her boss. They show her some photos from the convention, she doesn’t take it very seriously, she says they all look familiar because they are typical gamers. Rena introduces the cops to his fiancé, a wealthy investor capitalist named Steven. Steven reassures Rollins and Fin that their security team is working on it and they are taking Sarah’s attack very seriously, but their launch is in two years and it is a “game changer.”

Leslie, the GLasco Man creator, contacts the police – he might have information on Sarah’s attacker. He found the two attackers on a message board bragging about attacking Sarah and groping her breasts. They tell Leslie to send the members on the message board a message to meet up – Sonny goes with him to meet up with them. They brag about attacking Sarah – and then Fin and Carisi arrest the two guys. Sarah properly ID’s them from a line-up and Rollins says that the prosecutor will be in touch to press charges. Sarah asks them to try and “keep it quiet” until after the Amazonian Warrior launch. Unfortunately, the arrest goes viral on the internet and the message boards go in to a frenzy saying that Sarah got what she deserved because they don’t want women video gamers and creators. Rena gives an interview online live, while Rollins and Fin are watching, a SWAT team storms in to her office and slams her on the floor and screams they are with the NYPD.

Rollins and Fin rush to Rena’s apartment and realize that it was all a misunderstanding, Rena was “Swatted.” The haters on the internet called the police in the middle of her interview and said there were guns and children taken hostage at her house – Rena insists that she is okay. But, her fiancé Steven reveals that Rena is in danger and a hacker posted all of her personal information and address online. Also, the hackers have posted warnings online and saying that Rena is a “slut” and will be raped and murdered if her video game is launched. Olivia thinks that Rena should post-pone the launch, Rena says that is not an option and she refuses to be intimidated by cyber terrorists. She pleads with Olivia to back off – and warns her that she doesn’t want any police at her launch tomorrow.

The next day Olivia and her team head to Rena’s launch anyways, and it is a good thing because the internet hackers attack and shut off the lights while she is on stage and set off smoke bombs and gun shots over the loud speakers. A security guard grabs Rena off the stage and drags her outside during the commotion and she is kidnapped by the internet hackers in a white van. They run the license plates and get a tip that the van is parked at an abandoned factory. Olivia’s team an the NYPD head to the abandoned factory, they find a flag hanging on the wall from the internet hackers, along with Rena’s bloody shirt, and a video. In the video they have Rena tied up to a chair – and they rip her shirt off from her, then it says “Level Completed.” And goes black.

Fin is worried – he says that this is obviously a video game to them, and Rollins doesn’t want to know what the next level is. They set up a call center to field tips at the police station, and Carisi calls Olivia in. The gamers have set up a live feed of themselves and Rena – and they are preparing to rape her. Carisi says that they can’t track the feed – all they know is that it is live. They get a tag on the job and an address from where the video was uploaded. The house belongs to a an art teacher named Mrs. Rossi. They rush to the basement where her son Anthony plays video games, and realize it was the same place Rena was filmed. They also find an empty gun safe.

Anthony’s mom is in complete denial – she insists that her son wouldn’t have hurt anyone and he is a “good kid.” She refuses to believe that Anthony has anything to do with the sexual assault of Rena in her basement. Anthony’s mom admits that Anthony has been a little troubled since his father passed away – but he would never rape or murder someone. She admits that there were two pistols, and a shot gun in the gun safe and they are missing.

Fin tells Olivia that Rena is in trouble – the next level in the game is “Kill of Be Killed.” They receive a phone call from Rena calling for help and telling them where she is being held. Fin tries to warn Olivia that in the final level of the game, the police are all ambushed and it is a set-up. Olivia, Fin, Rollins, and Carisi all rush to the address and the NYPD Swat Team joins them. They kick in the door and begin throwing flashbombs in. Regardless of whether it is a set-up they have to save Rena.

They find Rena with a shot gun duct taped to her hands and nearly shoot her, she cries that she can’t put it down. Fin helps her untape her hands, and Rollins and Carisi head up on the roof to look for the gamers. They find Anthony and he cries that the other guys are out of control, that is why he tagged the video so they could find him. She handcuffs Anthony to a door, and then finds Carisi being held hostage by another kid with a gun. Fin comes to their rescue and shoots and kills the kid second before he kills Carisi.

Back at the police station – Fin learns from Olivia that he is on administrative duty for a few days until they research what happened. But, he doesn’t have to give up his gun because it was a “good shoot.” Olivia sends Fin home, Rollins pays Rena and Steven a visit to fill them in on the case, one of the kids took a plea deal, but the other one is going to trial. Rena says she is quitting the video game business, and ROollins tries to remind her that if she gives up the gamers win. Rena sobs that they already have.