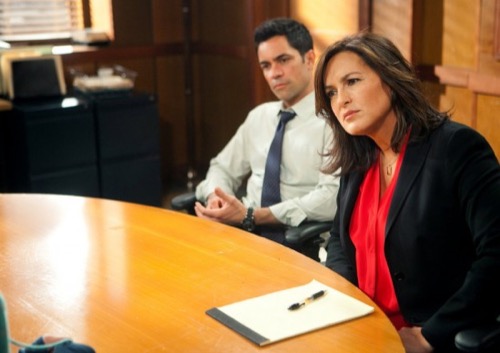 Tonight on NBC Emmy Award-winning producer Dick Wolf’s crime drama, Law & Order: SVU continues with an all new Wednesday February 4, season 16 episode 13 called, “Decaying Mortality” and we have your weekly recap below. On tonight’s episode, a teenager claims she was raped in a pizzeria bathroom, but there’s little evidence found, so the suspect is released. Not pleased, the teen’s emotional father decides to take the law into his own hands.

On tonight’s episode as per NBC’s synopsis, “Benson (Mariska Hargitay) and Rollins (Kelli Giddish) find a teenaged girl crying in the street, her clothes torn. Jenna Davis (guest star Haley Lu Richardson) says she was raped in a pizzeria bathroom by Jerome Jones (guest star Kamal Bolden). Jones has a criminal record as well as a pending lawsuit against the NYPD, but with little evidence to go on, the SVU releases him until an arrest can be made. With emotions running high, Jenna’s father (guest star Jamie McShane) takes the law into his own hands with a decision that will change their lives forever. Also starring Ice-T (Det. Odafin Tutuola), Danny Pino (Det. Nick Amaro), Raul Esparza (ADA Rafael Barba) and Peter Scanavino (Det. Sonny Carisi). Also guest starring Paul Adelstein (Dr. Neil Alexander), Eva Kaminsky (Marcy Davis) and Jason Cerbone (Counselor Desappio).”

Tonight’s season 16 episode 13 looks like it is going to be great and you won’t want to miss it, so be sure to tune in for our live coverage of NBC’s Law & Order: SVU at 9:00 PM EST!

Tonight’s episode of Law & Order SVU begins with Rollins and Olivia meeting up for coffee, Rollins just got back from a meditation summit in Costa Rica. She apologizes for everything that she put the team in Olivia through, but Olivia explains that it is okay. Meanwhile outside, a teen girl is stumbling down the street and guys are trying to talk to her. She goes in to a bathroom at a store, and the clerk comes in and tries to talk to her while she is flailing around. Olivia and Rollins head outside of the coffee shop, and the girl runs out in to the street screaming. The store clerk follows her and Olivia and Rollins rush to her aid – she screams that the store clerk raped her and Olivia proceeds to arrest him.

The frantic girl is taken to the hospital, her name is Jenna – the reason she was so out of it was because she had drugs and alcohol in her blood stream. Apparently Jenna was only 16 years old and she was a virgin, before she was raped. Fin and Nick are questioning the store clerk in the interrogation room – they learn that his name is Jerome and he is part of the “Prospect Park Three”, and TPTB say that they have to take it easy on his because his family has a $36 Million law suit against NYC for police brutality.

At the hospital, Amanda and Rollins speak to Jenna’s parents, the last time they seen her was when she left for her dentist appointment at her Uncle Alexander’s office. Alexander Neal is a consultant with the NYPD and he arrives at the hospital, he insists that Jenna’s meds had worn off and when she left the office she was fine. Jenna wakes up and Amanda and Olivia question her, she went to her friend Cara’s house afterwards and began to feel sick and leave. She insists she went in to the pizza store and the clerk came in while she was going to the bathroom and he raped her. Meanwhile at the police station Nick is furious when the DA tells him to set Jerome free since they have no physical proof that it was him that raped her and Jenna was intoxicated.

At the hospital, Neal and Jenna’s dad corner Olivia and they are furious that Jerome is being set free. Her dad accuses them of caring more about politics than her daughter. Nick pulls the security footage from the street, Jenna was only in the pizza place for ten minutes before Jerome came running out after her. They are going to track down some witnesses that were in the store at the time. Olivia receives a phone call, Jerome is dead – Jenna’s father killed him.

Jenna’s father insists that he was just trying to record Jerome’s confession, he captured the entire murder on videotape. Olivia and her team watch the video – Luke Davis had him tied up in a chair and proceeded to shoot him with a nail gun. Finally Jerome confesses to the rape – but it was totally coerced. Jerome began wheezing and passed out. Luke tried to administer CPR and called 911, however he died.
Luke Davis heads to court – and he pleads not guilty. The court room is a media circus, Jerome’s family screams at the judge that Luke murdered an innocent man. The judge send Luke to prison and sets his bail at $1 Million. Outside, Jerome’s mother speaks to the press and insists that the NYPD was framing her son. And, it gets worse. They get security footage from the pizza place and realize that Jerome was in the bathroom with Jenna for less than two minutes and she left fully clothed, there is no way he could have raped her.
Nick and Rollins get a recording from the jail of Jenna visiting her father. In the recording she admits that she isn’t sure that Jerome is the one that raped her, but she is going to keep saying that he is the rapist so that her father doesn’t get tried for murder. Rollins questions her about what really happened at her friend Cara’s house, she admits she had a few sips from a vodka bottle with her friend, but she didn’t take any drugs. Jenna tries to remember when she was raped, she remembers sitting in a chair and sliding down, and hearing a belt buckle hitting the chair. She has no idea who it was – but she could feel a big ring on his hand like the one her Uncle Neal wears, she knows it was him.

Nick heads to the dentist office to see Jenna’s Uncle Neal, they reveal that they found some DNA under Jenna’s nail and since he seen her last they need a sample of his DNA. Neal says he has to tend to one of his patients, he swabs his check for DNA real quick and then has his wife Gia get them a list of patients’ names that were in there. Gia admits that there are Clazopan pills in the office, and Jenna could have stolen it when they weren’t looking.

Fin gets a phone call from the lab, the semen on Jenna’s skirt matches the DNA of her Uncle Neal. They bring Neal in for questioning, he insists that he and his wife Gia had sex in the dentist chair before Jenna arrived. He threatens to sue the NYPD, and says that Jenna’s story is completely made up and he would never touch a patient, let alone his own niece. Olivia has her team start combing through the records to see if there were any other complaints from women saying that Neal raped them.

The next day Jenna and her mother show up at the police station, Jenna’s mom took her to a therapist and now Jenna thinks that she was wrong and Neal didn’t rape her. Olivia is baffled, and Jenna’s mom is in complete denial, she doesn’t believe that her brother would ever do that to her daughter.

Olivia decides to leak the story to the press, even though Jenna is now insisting that Neal is innocent. Jenna may not testify against him, but when other women see the story in the press they will come forward and feel confident enough to admit that Neal raped them too. Olivia’s plan is a success, as soon as the story hits the news the phones start ringing off the hook. Olivia orders her team to bring in all of the women that call so that they can vet them and question them. They have a total of eleven victims that claim Dr. Neal raped and fondled them while they were under sedation.

Olivia and the DA sit down with Jenna’s mom, she breaks down and admits that three friends of her’s called her after the story ran in the paper and said that Neal raped their daughters too. Jenna cries that Neal will “break her if she testifies.” She says that her brother Neal is too smart and they aren’t going to be able to catch him. She agrees to help them try to pin the crime on Neal.

The next day Jenna goes to lunch at a restaurant and is strapped with a microphone and camera. She tries to trick him in to admitting that he raped her. She starts crying that she is pregnant, Neal informs her that he couldn’t have gotten her pregnant because he had a vasectomy. Fin and Rollins come in to the restaurant and arrest Neal for raping Jenna and he demands his lawyer. Neal is escorted to the police station, and Jenna’s mom freaks out on her brother when she sees him marched in wearing handcuffs. The DA sits down with Jerome’s mother and explains to her that Neal raped Jenna, not Jerome. He apologizes, but they are going to offer Jenna’s Dad Luke Davis a deal for Jerome’s death.