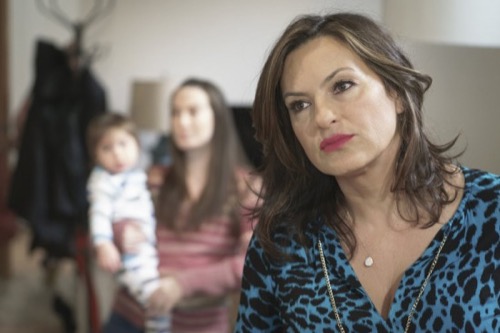 Tonight on NBC Emmy Award-winning producer Dick Wolf’s crime drama, Law & Order: SVU continues with an all new Wednesday February 18, season 16 episode 15 called, “Undercover Mother” and we have your weekly recap below. On tonight’s episode, a mother works as a madam to find her daughter, and this leads her to help an undercover Carisi, who’s trying to take down a sex-trafficking ring.

On the last episode, video game developer Raina Punjabi (guest star Mouzam Makkar) solidified the launch of her first game amid a stream of online insults, intimidation and death threats from the male-dominated gaming community. When a female employee was assaulted at a gamer convention, Detective Tutuola (Ice-T) investigated the crime but Raina refused to delay the launch, and the cops must “level up” to protect her. Also starring Mariska Hargitay (Sgt. Olivia Benson), Kelli Giddish (Det. Amanda Rollins) and Peter Scanavino (Det. Dominick Carisi Jr.). Guest starring Peter Mark Kendall (Steven Kaplan), Susannah Flood (Sarah Keller) and Griffin Matthews (Leslie Connolly). Did you watch the last episode? If you missed it, we have a full and detailed recap right here for you.

Tonight’s season 16 episode 15 looks like it is going to be great and you won’t want to miss it, so be sure to tune in for our live coverage of NBC’s Law & Order: SVU at 9:00 PM EST!

Tonight’s episode of Law & Order SVU kicks off with Olivia, Rollins, Nick, and Fin sitting outside of a party – Karisi is inside and wearing a wire. A van full of women arrive outside of the party – Olivia recognizes Selena as the prostitutes’ handler and warns them not to let her upstairs because she will recognize Karisi. Rollins and Olivia pounce on Selena before she gets upstairs and arrest her and the group of women she is with. Nick and Fin rush upstairs and arrest everyone at the party, including Karisi to make it look good.

One of the women that are arrested at the party reveals to Olivia when she is being booked that she is undercover and she has been tracking this sex ring for a year – she is looking for her daughter. She pleads with Olivia to see the van load of girls that Selena arrived with because she wants to see if one of them are her daughter.

The woman explains that her name is Martha and she isn’t a cop, sex traffickers took her daughter Arielle when she was 13 years old and they were on vacation in Toronto. Martha explains that the Canadian police didn’t believe her and thought that she and her husband was responsible. Olivia says they need some kind of proof – so that they know she isn’t lying. Martha takes Olivia and Fin to her apartment where she has dedicated an entire wall to tracking her daughter Arielle, and all of the places that she was spotted. Martha admits that she has a contact on the inside that knows Arielle – but she refuses to give Olivia her contact’s name.

Olivia and her team brief the DA on Martha and show him all of the evidence that she acquired while searching for her daughter for the last three years. Barba isn’t buying it, regardless of what her motives are Martha broke the law and she is facing 20 years in prison. Olivia wants to send Martha back in undercover, but Barba says it is not an option. Meanwhile, Rollins sits down with one of the girls that they picked up at the party and shows her pictures of Arielle – she explains that Arielle mouthed off to their pimp Timmer and he “stomped her out” and didn’t put her in the van. Nick interrogates Selena and lectures her for getting back in to the sex slave game after they got her son Miguel back for her from Mexico. Fin warns her that Miguel is with social services, and she is never going to see him again – Selena doesn’t budge and still refuses to give them any information on TImmer or Arielle.

After interrogating all of the girls, they finally get an address to a party house – Martha recognizes the address and says that she has been there before and it is ran by a madame named Tracy. Karisi and Fin sit outside and take photos of Timmer arriving at the house with a van load of girls. The madam Tracy comes out and curses Timmer out, and then he peels off in his car. Karisi and Fin decide to follow Timmer. Meanwhile, Rollins and Nick see another truck pull up to the house, he appears to be delivering alcohol and beer. Karisi and Fin lose Timmer, so Rollins and Nick follow the beer delivery guy and pull him over. Olivia shows Martha pictures of the girls that were TImmer that day, Martha cries when there aren’t any pictures of Arielle – it’s the group of girls that Arielle is always with and Martha is scared that she is hurt.

Nick goes under cover as the beer delivery guy and replaces Tommy, once he gets through the door he pulls his badge and gun on Tracy and the girls inside, Rollins and the rest of the team rush through the back door as back up. They take everyone at Tracy’s party house in to custody. Olivia shows Tracy a picture of Arielle, she says that she hasn’t been there in a week. They tell Tracy to call Timmer and tell him that she has a “special request for snow bunnies.” Olivia gets to work setting up a sting, and calls in some undercover agents to pose as hookers and party goers. Martha wants to go with Olivia, but Olivia shuts her down and tells her to go home and sleep. Martha argues that she is a mother and she can’t sleep until Arielle is home safe. She pleads with Olivia to let her go.

Olivia and Fin get dressed to go undercover and head to the party house. Olivia poses as a madam and Fin as her handler, Karisi works under cover. Martha, Rollins, and Nick sit outside and do surveillance. Timmer swears that Arielle is coming, but she still isn’t there yet. The mystery guy gets out of the car, and Tracy reveals that he is TImmer’s boss Bishop. Bishop storms in and demands to know who the trespassers are at the party, Tracy warns Olivia that Bishop is crazy. Bishop pistol whips Karisi, and Olivia pulls her gun on Bishop. Nick, Rollins, and a group of officers storm in to the door and arrest everyone at the party – including Olivia so that she doesn’t blow her cover.

Olivia calls Barba in to the office after the bust and reveals that they all went undercover, she reveals that they arrested Bishop – who is actually her former boss Declan and is deep undercover. Olivia and Fin bring Declan in to the interrogation room and he screams at them for messing up his organization. Olivia shows Declan a picture of Arielle and he recognizes her, Declan says that Arielle is damaged goods and Timmer sold her to a man named Johnny D. for $800. Olivia agrees to put Declan back in holding before he blows his cover, he agrees to try and help them find Arielle.

Meanwhile Rollins is interrogating the girls from the latest sting, they interview Arielle’s friend Nina. She says that Timmer caught Arielle on the phone with Martha, so he beat her until she blacked out. Martha sits down with Nina and begs her to tell her where Arielle is, Nina isn’t buying it and reveals that Martha’s boyfriend pimped her out in Canada. Martha shows Nina a picture of Arielle and her mom when Arielle was little to prove who she is. Nina reveals that the morning after Timmer beat her, he took Arielle to Johnny D’s house. He keeps his new girls chained up for a week to “break them.” Rollins and Fin interrogate Timmer and break him down – they get an address for the building that he took Arielle to.

Olivia, Fin, and the rest of the team storm the abandoned building where they find rooms with badly beaten girls laying on mattresses. They hear someone screaming and rush in to the room. They find Arielle – but a pimp has taken her hostage and is holding a piece of glass up to her neck. He finally lets go of Arielle and demands his lawyer as he is handcuffed and dragged away.

Olivia and Martha stop by Arielle’s hospital room – when she wakes up she recognizes her mom and bursts in to tears. Rollins visits Declan in the interrogation room, they catch up and Declan tells her “what doesn’t kill her makes her a better detective.” Olivia arrives and says that they took Johnny D. down and he is going away on federal charges. Declan says that now that Johnny is out of commission – he is the new kingpin, he tells Rollins to cuff him and take him to Rykers and “make it look good.” He tells Olivia to take care of herself before he heads out.

Olivia heads home and is taking care of Noah when there is a knock at the door, the woman from social services reveals to Olivia that Johnny D is Noah’s father.