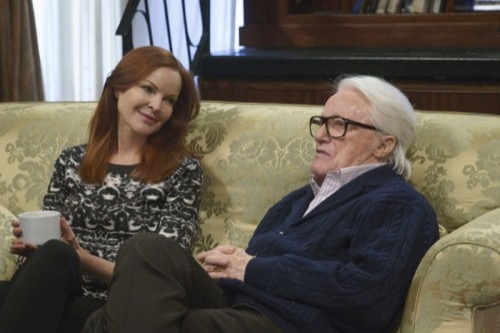 Tonight on NBC Emmy Award-winning producer Dick Wolf’s crime drama, Law & Order: SVU continues with an all new Wednesday February 25, season 16 episode 16 called, “December Solstice,” and we have your weekly recap below. On tonight’s episode, a woman is accused of abusing her elderly husband, who’s a famous author, and his health and his fortune become the focal points of a battle between his wife and his daughters from previous marriages.

On the last episode, working undercover to bust a sex trafficking ring, Det. Carisi (Peter Scanavino) stumbled upon Martha Thornhill (guest star Lili Taylor), a mother who has embedded herself as a Madame in the organization for three years in hopes of finding and saving her daughter, Ariel. Martha joined forces with the SVU and they worked together to bust the pimp and his cohorts, but Ariel was still missing. Meanwhile, Sgt. Benson (Mariska Hargitay) was confronted with a harsh revelation that changed her life forever. Also starring Ice-T (Det. Odafin Tutuola), Danny Pino (Det. Nick Amaro), Kelli Giddish (Det. Amanda Rollins) and Raul Esparza (ADA Rafael Barba). Guest starring Danielle Burgess (Nina Soren), Amanda Warren (Tracy), Justin McCarthy (Tommy Strickland) and Tamara Tunie (M.E. Melinda Warner). Did you watch the last episode? If you missed it, we have a full and detailed recap right here for you.

On tonight’s episode as per NBC’s synopsis, “a woman is accused of abusing her elderly husband, who’s a famous author, and his health and his fortune become the focal points of a battle between his wife and his daughters from previous marriages. Meanwhile, Barba defies his grandmother’s wishes.”

Tonight’s season 16 episode 16 looks like it is going to be great and you won’t want to miss it, so be sure to tune in for our live coverage of NBC’s Law & Order: SVU at 9:00 PM EST!

Tonight’s episode of Law & Order SVU kicks off with DA Barba paying Olivia a visit at home, she confesses to him that Johnny D. was the father of Ellie’s baby – and that makes Owen his biological son. She didn’t want to believe it and ran the DNA three times, but every time it came back a match. Barba reassures Olivia that it is not against the law for her to keep the information to herself, and Johnny never has to know that Owen is his son.

That night at an elegant party an elderly man is making his rounds, he appears confused and slightly out of it – his much younger wife helps him out to the car. While they are leaving his two daughters run up to the car, they explain to their dad that his wife won’t let them see him and has banned them from the house. The old man seems to have a tough time even recognizing that they are his daughters and waves that it was “nice to see them” before the car speeds off.

The next morning the two daughters show up at the police station and tell Olivia that their father Walter Briggs is being raped by his wife Charmaine. They say Charmaine has been pumping their father with Viagra and forcing him to have sex with her every day, it is considered rape because he has dementia and has no idea what is going on and is over 80 years old. The daughters insist that Charlemagne is trying to get pregnant so that she can get her share of their father’s will and the baby’s share of the estate as well. The daughters haven’t actually seen the rape firsthand, but the housekeeper told them all about it.

Carisi sits down with the housekeeper and she confirms that Charmaine is pumping Walter with Viagra and forcing him to having sex with her every day. Rollins and Carisi visit Walter and Charmaine and Walter insists that he “enjoys pleasing his wife with his varnished eel.” There is no doubt that Walter is willingly having sex with his wife, but there is some questions about whether or not he is mentally capable to give consent.

While Carisi and Rollins are briefing Olivia on their visit, they receive a phone call from the hospital revealing that Walter had been rushed to the ER and was having a heart attack. Walter has a history of heart problem, and going in to cardiac arrest could be the results of the Viagra that his wife was giving him without his consent. Olivia and her team rush to the hospital, and when they arrive they learn that Charmaine took her husband against doctor’s advice away in a private ambulance before they were able to run ay tests on him. The doctor isn’t even sure if Walter will survive without an EKG machine. They begin trying to track down Walter and his wife Charmaine, the ambulance driver said that Charmaine was planning on taking her husband to Canada. And, when he wouldn’t drive her to the airport, Charmaine dragged her husband out of the ambulance and put him in a cab.

Carisi and Nick track Walter and Charmaine down at the airport, she insists they are just taking a vacation to Canada. Nick informs her that she can’t take Walter out of the country because his daughters have a court order to see their father. They head to the court before the judge, Charmaine argues that she can take her husband on vacation if they want to. Nick and Carisi argue that Charmaine does not have Walter’s best interests in mind – and she yanked him out of the hospital and gave him Viagra which worsened his heart condition. The judge orders Walter back in to the hospital – and grants his daughters visitation of him. The judge said they will reconvene to determine who will be Walter’s legal guardians.

The next day at the police station Carisi receives a phone call revealing that Walter died in the hospital overnight from another heart attack. Nick and Carisi rush to the hospital to stop Charmaine from talking walter’s body. They have a court order to do have a medical examiner investigate his death and make sure that Charmaine wasn’t responsible and the Viagra she was giving him didn’t cause his heart attack.

They all head back to court and the housekeeper takes the stand first – she says that Charmaine was “mashing up the erectile dysfunction pills and putting them in his orange juice when he wasn’t looking.” Meanwhile after court Barba has personal problems of his own to deal with, he and his mother are trying to convince his grandmother to go in to a nursing home. He doesn’t think it is fair that his mother has to take care of her every day.

In court Walter’s daughter Delilah takes the stand, they reveal that Charmaine wouldn’t let them see her father because she was afraid they would convince him to change his will – that’s why she yanked him out of the hospital an hour after he had a heart attack. While they are giving their testimony, Judith, Delilah, and Charmaine all receive a video message from Walter on their cell phones. Olivia and her team analyze the video and learn that it was recorded three years ago by an internet service – and his obituary triggered the video to be sent. In the video Walter bashes his daughters and says that they treated his wife Charmaine like crap – and they didn’t speak to him for years. In court Walter’s daughter argues that when Walter made the video he “under her influence.”

Charmaine takes the stand and testifies that the reason that she took Walter out of the hospital was because he wanted to die at a peaceful lake in Canada. Charmaine says that Walter made it very clear that he didn’t want to die in the hospital. She says that she drugged Walter with erectile dysfunction medicine because he was “very proud” and didn’t need to know that his body was no longer working. Barba reminds the jury that Charmaine had no idea that Walter was “going to die” because she isn’t a doctor, he may have survived the last heart attack if Charmaine hadn’t yanked him out of the hospital.

Walter’s other daughter Judith announces that she wants to take the stand, she is furious that her sister Delilah lied to her and didn’t tell her that she and Walter were fighting about playwrights. Judith wants to take the stand and accuse Delilah of lying. There is an intermission and Charmaine, Delilah, and Judith bicker over what Walter would have wanted. Barba offers Charmaine a plea deal, she says she will take the deal and plead guilty as long as Judith doesn’t get any playwrights to Walter’s books. Charmaine announces that she has two votes on the will because she has a baby on the way, she hired a surrogate to carry Walter and her’s baby. Charmaine gets one year of probation, and Judith and Delilah agree to disagree over Walter’s book rights.