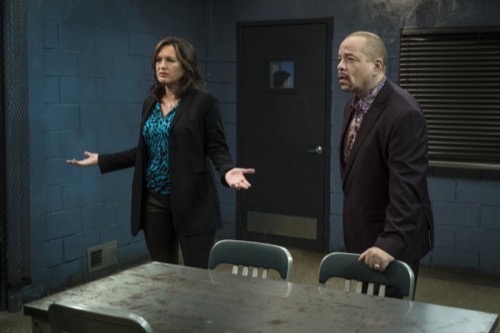 Tonight on NBC Emmy Award-winning producer Dick Wolf’s crime drama, Law & Order: SVU continues with an all new Wednesday March 25, season 16 episode 17 called, “Parole Violations” and we have your weekly recap below. On tonight’s episode, Carisi’s [Peter Scanavino] future brother-in-law makes a rape accusation against his female parole officer, forcing Carisi to investigate whether his sister’s fiancé is telling the truth or allowing his old bad habits to resurface.

On the last episode, a woman was accused of abusing her elderly husband, who’s a famous author, and his health and his fortune became the focal points of a battle between his wife and his daughters from previous marriages. Meanwhile, Barba defied his grandmother’s wishes. Did you watch the last episode? If you missed it, we have a full and detailed recap right here for you.

On tonight’s episode as per NBC’s synopsis, “Detective Carisi’s (Peter Scanavino) sister Bella (guest star Marin Ireland) prepares for her wedding to fiancé Tommy Sullivan (guest star Michael Chernus) and the upcoming birth of their child. But when Tommy falls back into bad habits and accuses his parole officer (guest star Molly Price) of rape, Carisi must investigate whether the claim is real or just another one of Tommy’s excuses.”

Tonight’s season 16 episode 17 looks like it is going to be great and you won’t want to miss it, so be sure to tune in for our live coverage of NBC’s Law & Order: SVU at 9:00 PM EST!

Tonight’s episode of Law & Order SVU kicks off with Sonny at his sister Bella’s house, he learns that she is engaged and pregnant with her boyfriend. Sonny’s future brother-in-law heads to meet up with his probation officer – he brags to her that he is doing good, his girlfriend is pregnant and he just got a promotion. His parole officer gives him a cup and says she wants a urine sample – she says he has to pee in the cup right in front of her, and pulls the blinds down on her office window.

The next morning Bella shows up at the police station and is hysterical, she says that Sullivan never came home the night before. Sonny finds out that Sullivan was arrested the night before in a bar fight – he heads to the jail and picks him up and rants that his parole officer is going to throw revoke his parole and send him back to prison. Sullivan confesses to Sonny that his parole officer is a woman and she “made him do her” and pulled a gun on him.

Sonny heads back to the station and tells Olivia about what happened to Sullivan. Olivia is shocked to hear that his parole officer pulled a gun on Sullivan during a urine test and raped him. Olivia and Nick head to Tommy Sullivan’s job and he doesn’t want to answer their questions. He insists that what happened to him is “no big deal.” He wants to just suck it up for a few months, until his parole is over. Nick tells him to go to the hospital and get tested for STD’s, he has a pregnant fiancé and he cant put her at risk. Olivia convinces Tommy to come in to the office tomorrow and drop off the clothes that he was wearing – and give an official statement.

Nick runs a check on Tommy’s parole officer, Donna Officer, she has a Masters Degree in social work and has worked at the downtown office for over a decade. Rollins is skeptical, but Olivia reminds her that they have to take him just as serious as a woman that cries rape.

Olivia has Donna’s boss Kessler come in – she reveals that a man is accusing that Donna of raping him. Kessler isn’t buying it, he says that Donna is not even a sexual being. He demands to know who the lying SOB” is that made up the story, but Olivia refuses to give him Tommy’s name.

Meanwhile, Sonny and Tommy are trying to break the news to Bella that he was raped. While all three of them are arguing, there is a knock on the door – it’s TOMmy’s parole officer. Donna marches in with a cop and says that they are doing a surprise home inspection. She walks in to the bedroom and “finds” a bag of pills. Tommy insists that he has never seen the pills before but Donna arrests him and drags him out the door while Sonny and Bella watch in shock.

At the police station Nick gets a phone call from the lab – they found Donna’s DNA and fluids on his clothes, so he wasn’t lying, he did have sex with her. Now, they just have to prove that it was rape. Sonny visits his sister Bella to update her on Tommy’s case – he is still sitting in prison and being charged for selling drugs. Bella doesn’t want to hear it, she has had enough, she confesses to Sonny that she is thinking about getting an abortion because she doesn’t want to raise the baby on her own.

Olivia and Rollins bring Donna in for questioning, she insists that Tommy came on to her and gave her a massage and seduced her. They get the finger prints back on the drugs that were planted in Tommy’s house, they belong to a drug dealer named Jordan Dolphy. Nick and Rollins head to Jordan’s house – he reveals that Donna made him give her the pills and she forces him to have sex with her in exchange for clean urine tests. Jordan says that at first he tried to say “no” but Donna pulled a gun on him. Olivia and Nick take their case to the DA, he agrees to move forward and try to press charges against Donna, but he says it will be tough convincing a jury that a woman can rape a man.

Bella stops by Olivia’s house, she tells her that Tommy’s story is true – and he really was raped. Bella is still skeptical, she doesn’t understand how Tommy could have gotten aroused with a gun to his head. Olivia explains that it is a physical thing – it doesn’t mean that he really wanted to have sex with Donna. Noah wakes up from his nap and Olivia introduces Bella to the baby.

The next day Sonny heads to court and testifies on Tommy’s behalf. Donna’s lawyer argues that Tommy only told Sonny that he was raped because he didn’t want Bella to be mad that he had cheated on her. Tommy takes the stand and describes in detail that Donna pulled her gun on him and handcuffed him to the desk and gave him oral sex, and then she climbed on top of him and had sex with him. Tommy confesses that he was scared if he didn’t go through with it Donna would shoot him or send him to prison. Donna’s lawyer argues that Tommy is twice the size of Donna, and if he wanted to fight her off he could have.

There is a recess and the DA and Sonny realize that Jordan Dolphy snuck out of the witness room and left the courthouse while Tommy was testifying. Sonny panics and shouts at the guard that he shouldn’t have let Dolphy out of his site, the officer argues that he wasn’t under arrest and they couldn’t hold him there. Barba asks the judge to give them some time to find Dolphy, he learns that Dolphy is now testifying for Donna and is saying that the police coerced him in to saying she raped him. Dolphy takes the stand and says that Nick and Rollins told him they wouldn’t arrest him for the drugs if he testified against Donna. Barba questions him and asks him how he passes his drug tests every week if he does drugs – Dolphy insists that he doesn’t do drugs. The judge tells him to roll up his sleeves, his arms are covered in needle marks. It is obvious that he does heroin, and Donna has been doctoring his urine tests. Dolphy breaks down and starts shouting at Donna and her boss Kessler – he shouts that they told him they would make the drug test go away if he changed his story.

After court Barba meets with Donna and her lawyer, he tries to cut a deal and says that she is already being fired and she doesn’t want to take the stand and be humiliated. Donna agrees to plead guilty to sexual misconduct, five years probation, and she is going on the sex offender registry. Donna snaps and shouts at Olivia that she tried to help the conducts – but they dragged her down to their level, and they will never change. Sonny heads to Bella’s house and tells them that Donna isn’t going to jail but she is fired and is going on the registry. Tommy arrives home, he was just released from jail, he hugs her and promises her that everything is going to be okay now.