BY Kristine Francis on May 13, 2015 | Comments: one comment
Related : Law And Order, Recap, Television, TV 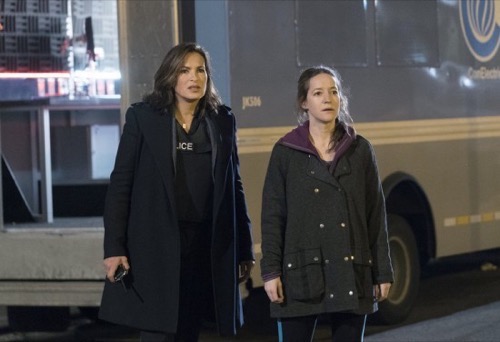 Tonight on NBC Emmy Award-winning producer Dick Wolf’s crime drama, Law & Order: SVU continues with an all new Wednesday May 13, season 16 episode 22 called, “Parents’ Nightmare” and we have your weekly recap below. On tonight’s episode, a little boy is kidnapped from school and a ransom request is made. Detectives soon uncover that the boy knew his abductor, but friction between his parents impedes the investigation. Meanwhile, Benson (Mariska Hargitay)  must take an exam to formalize her promotion.

On the last episode, Bayard Ellis (guest star Braugher) took on the case of a man incarcerated for incest and rape, whose daughter Michelle (guest star Samira Wiley), the victim and star witness when she was a child, wanted to recant her testimony and set her father free. When a judge refused to reopen the 17 year old case, the SVU turned to retired Captain Cragen (guest star Florek), who remembered the investigation and provided evidence that could change the convict’s fate. Did you watch last week’s episode? If you missed it we have a full and detailed recap right here for you.

Tonight’s season 16 episode 22 looks like it is going to be great and you won’t want to miss it, so be sure to tune in for our live coverage of NBC’s Law & Order: SVU at 9:00 PM EST!

Young Owen Farhidi was snatched from school on tonight’s all new episode of “Law & Order: SVU” and the blame for this one can be passed all around.

Apparently a man claiming to be a friend of his mother’s was able to walk right into the school yard and was even granted the teacher’s permission to claim him. And he gained the boy’s trust by saying he was the one that had fixed the sink recently. So Owen actually believed this man knew his mother and, unfortunately for him, he didn’t begin to doubt the stranger until it was already too late.

His mother was supposed to have picked him up but like usual she was running late. See Dana, Owen’s mother, is more than just spacey. And often her son tends to be less of a priority. That is when she’s not fighting her ex over custody.

Sam and Dana have been separated for the last couple of months and lately they’ve been fighting things out in court.

Sam wanted to take his son on a trip to Iran for the summer. You know in order to connect him with his roots. But according to Sam, Dana played the terrorist card with her husband that happens to be of Middle Eastern descent. And so the judge ordered Sam to hand over Owen’s passport to his wife.

However Dana doesn’t know for sure if she ever received it. Again she’s spacey. So she doesn’t keep track of things and the police felt they should double check her story. In case she called someone to pick up her son but merely forgot she made the call.

And seeing as Dana had left her phone at yoga, Carisi had to go pick it up for her. Yet what they found on said phone ended up clearing both parents. Because someone had called Dana making a ransom demand.

The man that had snatched Owen wasn’t a stranger. His name was Javier and he was the part-time nanny’s boyfriend. So Dana was able to identify him when she finally saw a clear picture of his face. And the police tried to look for Javier with his girlfriend Fabiana’s help but she didn’t know where he was.

He had cleared out of his hovel that he shared with at least ten other guys and the last his roommate had heard – Javier said he was coming into a big payday.

So all that was left was to arrange a drop off in exchange for the safe return of Owen. And after they got the nearly forty thousand dollars together – the rest was easy. Almost too easy.

Sam made the drop and he got back Owen. And Javier barely made it a block away before the police picked him. Thus the case should have been closed but Javier made a wile accusation when he was arrested. He said Dana had set everything up.

And such an accusation couldn’t be ignored. It had to be investigated and soon things weren’t looking good for Dana.

After her divorce, Dana had complained about her husband to any and everyone. She accused him of hiding money. Specifically thirty-seven thousand which was the exact number that Javier had asked for in the ransom demand. And it’s been established that Dana had to come to rely on Javier.

She allegedly asked him over to the house all the time. She had him fix the sink, the shower, and often she would talk to him in his native Spanish. So he wasn’t exactly a stranger to her. He was more like a friend.

A friend that she also paid to do some odd jobs around the house.

Dana’s excuse for using him so frequently is that he was cheap. She claimed she couldn’t afford a professional what with her ex holding all the purse strings. And because she didn’t want to get a job – she stayed within her “meager” means.

But according to Dana, she wasn’t as close with Javier as the other man was letting on. Nor did she send him texts in order to arrange her own son’s kidnapping. Hence, if the police wanted to get anything done they then had to ask Owen. For it seems like Owen is the only one that’s willing to tell the truth.

And Owen told the police that sometimes his dad comes over when his mom’s out. Sam occasionally looked through Dana’s phone while he was with Owen. So the boy can recall his father reading his mother’s emails and her texts.

As for Javier, he changed his story after he saw that Fabiana was still in custody. He said it wasn’t Dana that hired him. It was actually Sam.

Yet no judge was going to take Javier on his word. So Benson convinced Dana to go in wearing a wire. Dana thought Sam would be exonerated but eventually he confessed on tape and that’s not what Dana wanted.

Plus she only realized how bad it was going to be, when she had to do everything herself, when she heard that Sam could get up to six months. Apparently Dana doesn’t know how to function on her own. Nor does she believe she can support herself.

So Benson had to give her a rude awakening. She’s a mother and now is the time to put Owen first. And as for Benson, she might have to take the lieutenant’s exam just so that she can remain in charge of her team. And that also means she’ll be needing a new Sergeant.

Who will step up to the plate? Tutuola, Amaro, or will we see a surprising face?