BY Amanda Austin on May 6, 2015 | Comments: one comment
Related : Law And Order, Recap, Spoiler, Television, TV 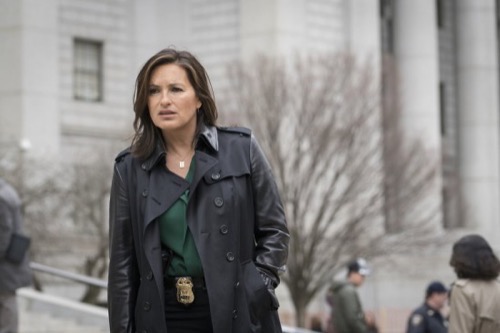 Tonight on NBC Emmy Award-winning producer Dick Wolf’s crime drama, Law & Order: SVU continues with an all new Wednesday May 6, season 16 episode 21 called, “Perverted Justice” and we have your weekly recap below. On tonight’s episode, a woman wants to recant her testimony in an incest case from when she was a child and free her father from prison, but the judge won’t reopen the case. The squad then turn to retired Capt. Cragen, whose memories of the investigation may help.

Tonight’s season 16 episode 19 looks like it is going to be great and you won’t want to miss it, so be sure to tune in for our live coverage of NBC’s Law & Order: SVU at 9:00 PM EST!

Tonight’s episode of Law & Order SVU kicks off in church, Olivia’s son Noah is being baptized. The rest of the SVU team tags along to support them. As they are leaving church, a woman named Michelle walks out behind them – the pastor stops her and she cries that her father is still in jail and it is her fault. Michelle asks the pastor if he knows the famous lawyer that gets innocent people out of jail. After church Michelle heads to jail with a lawyer named Ellis to visit her father. He isn’t thrilled to see her, but then Michelle tells him that she told the lawyer the truth – he never raped her.

Ellis heads out to lunch with Ellis – he tells her about Derrick Thompson, he was convicted of raping his daughter Michelle. Apparently Michelle’s mother encouraged her to lie to the police and say her dad raped her. Michelle tried to come clean when she was a teenager but no one would believe her, then she fell off the deep end – now she is sober and following a 12 step program and wants to help get her father out of prison. Ellis needs Olivia and her team to re-open the 20 year old case, and see if it is possible that Derrick is innocent.

Olivia heads back to the precinct and goes over the case with Carrisi, Nick, and Rollins. Olivia and Nick meet up with a retired cop, they are looking for the DA on the case, a man named Kenneth O’Dwyer. Meanwhile back at the station Michelle arrives – she tells Rollins and Amanda about the night that her dad was arrested. Michelle’s mom and dad got in a huge fight and they were screaming – her mom came in to her room and seen that she burnt her hand on the stove earlier. Michelle admits that her mom coached her in to saying that her “daddy touched her down there.” The next morning when Derrick went to work her mom called the police on her.

Carrusi and Nick track down Michelle’s mother Audrey– she rants that if you wait a week Michelle will change her mind, because she is messed up in the head because of her father. Michelle’s mother refuses to answer any more questions and storms off. So, Nick and Carrusi head to the prison to talk to Derrick. Derrick maintains that he is innocent, and he says that the police tricked him. Derrick cries that he writers to his kids Will and Michelle every week – and he is more of a parent to them than Audrey every was.

Captain Cragen arrives at the police station and says that he has information on their case. He has a letter from Michelle’s 1st grade teacher telling the police that Michelle came to her and was crying and said that her dad was innocent. Apparently DA O’Dwyer never entered the letter in to the evidence log 20 years ago. Ellis and Olivia go to meet O’Dwyer about the case – he insists that he didn’t hide the letter, he handed it over to Derrick’s lawyer, a woman named Cassie during the trial, but she never submitted it in court.

Carrusi and Rollins visit Derrick’s old lawyer at her apartment, she is no longer practicing law. Cassie admits that she received the letter – and confirms that she never used it because she didn’t want to upset the jury. The detectives are obviously baffled by her bizarre choice of defense. Ellis and SVU head to court to try to get an appeal for Derrick’s conviction, the judge shuts them down and says that Derrick should have come forward 20 years ago and said that he had an inadequate defense team. The cops take Derrick back to prison and Michelle screams at Ellis that she never should have trusted him before she storms out of the court room.

The next day the ex-detective that worked the case, McCormack, shows up at the precinct. He wants to make sure that SVU doesn’t re-open Derrick’s case. He rants that Derrick is “the lowest of the low and did his own daughter.” McCormack reveals that he still talks to Michelle’s mom Audrey – and he knew her before Derrick was arrested because he went to her house to save her several times from her abusive husband.

Rollins checks McCormack’s story – his wife filed for divorce two years after he arrested Derrick. In her divorce report they learn that Audrey was sleeping with Detective McCormack. Olivia sits down with Michelle and her little brother and they confirm that McCormack used to come to their house all of the time after their dad went to jail. Michelle remembers McCormack hugging her mom when she was crying on Christmas. They remember that their mom went away once for a weekend and they think she was with McCormack – he brought the kids back a pink flamingo.

Now that they can prove that McCormack was sleeping with Michelle’s mom Audrey, Ellis heads back to court to try to appeal the conviction. The judge agrees to a retrial, O’Dwyer offers Derrick a deal, he says if he pleads to criminal misconduct they will let him out of prison and count time served. Derrick refuses – he is innocent and refuses to be put on a sex offender list and plead to a felony.

They head back to court for the retrial – Michelle’s mom Audrey takes that stand first, she insists that the only reason she was sleeping with detective McCormack was because she needed protection for her children. Ellis cross-examines her and asks her why she hid the fact that she was sleeping with the cop that arrested her husband. Derrick gets up on the stand next and reveals that he has been writing letters to his children every week, he swears that he never assaulted his daughter Michelle. O’Dwyer cross-examines Derrick and accuses him of manipulating Michelle and making her feel guilty and convincing her to try to get him out of jail.

After Michelle takes the stand, they wait for the jury to come back with a verdict. Michelle heads outside to smoke, she cries to Olivia that she just wants this to all be over. She admits to Olivia that the truth is – she really doesn’t remember whether her dad did or didn’t rape her. The jury returns with a verdict and announces that they find Derrick not guilty of rape. Ellis reassures Olivia that they did the right thing by getting Derrick out of jail – but she doesn’t seem so sure.