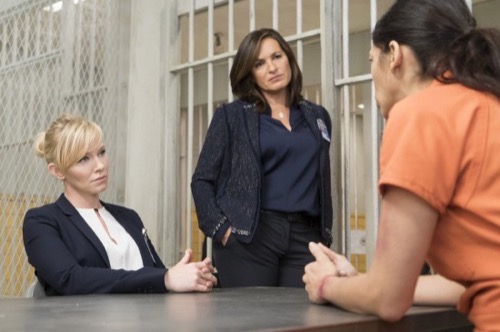 Tonight on NBC Emmy Award-winning producer Dick Wolf’s crime drama, Law & Order: SVU continues with an all new Wednesday May 20, season 16 finale called, “Surrendering Noah” and we have your weekly recap below. On tonight’s episode, in the 16th-season finale, Noah’s biological father is put on trial for a number of crimes, and Benson (Mariska Hargitay) worries about Noah’s safety when his adoption becomes intertwined with the case.

Tonight’s season 16 finale looks like it is going to be great and you won’t want to miss it, so be sure to tune in for our live coverage of NBC’s Law & Order: SVU at 9:00 PM EST!

Benson wants to formally adopt her son Noah. However she wasn’t uncomfortable about lying on official forms in order to do so. Hence she told her lawyer that Noah’s father isn’t just some unknown man. He’s actually a criminal she helped take down.

Johnny D was a notorious pimp who trafficked in young girls. That’s probably how he met Noah’s mother in the first place. And, well, eventually Johnny was caught thanks in large part to a sting operation. But from arrest to trial in a long period of time. Thus he was still awaiting trial when his lawyer told him about his son Noah and how Noah might prove to be useful towards his case.

Johnny and his lawyer were fighting to get his case thrown out because of police persecution. They’re going with the story that Benson deliberately went out of her way to arrest him in order to steal his son. And though the truth is she found out about the DNA after he was put in the system – the fact she was the arresting officer doesn’t look too good.

And that’s why Barba had advised her to keep quiet.

Barba told her that she didn’t have to put Jonny D name on Noah’s birth certificate but she did it anyway. And now there’s a reckoning. Because when his case didn’t get automatically thrown out – Jonny and his lawyer came up with a new tactic.

They threatened to get Johnny’s rights as father reinstated. And if that happens then Benson will have to take Noah to see Johnny in prison for the next 18 years. So Benson really did dig herself into a hole by telling the truth.

And she was still going to have to testify. Barba needed her testimony and if he didn’t call her then the defense was going to do it for him. There was no way her upcoming adoption of Noah was not going to be called into question.

Yet no one thought the issue was going to bring a media frenzy. Apparently the lawyer is playing up every angle he can and he wants to call Benson’s entire history into question. Has she ever made her cases personal? Is this the first time she ever crossed an ethical line?

It was really bad and it just kept getting worse.

Two of the witnesses that were supposed to testify against Jonny was put in the same police transportation vehicle. And for some reason the attending officer decided to leave them alone so she could get a cigarette break. So naturally by time she checked up in the criminals – one was dead.

Though that wasn’t merely a coincidence that a witness died during trial. The officer that was on duty was revealed to be dating one of Jonny’s friends. Thus she purposely went on a smoke break to give them time. Now one witness was down and another could claim the situation made her too frightened to testify.

And so that’s what would happened to the other witnesses as well. But Olivia spoke to Ariel, you remember Ariel, and she convinced the other girls like herself to stick to the truth. Else who knows what would have happened.

Johnny could have walked but towards the end of the trial he could see the case wasn’t going the way he wanted so he was getting visibly angry.

A couple of his “followers” had acted out in court and they were trying to disrupt Ariel’s testimony. Yet it seems that was all a diversion because it gave Johnny the perfect opportunity to grab the court officer and the officer’s gun. And then Johnny made a run for it but Amaro followed him.

Amaro was able to kill Johnny though he was injured in the process. He hurt his knee and because of that he knew he couldn’t stay on at the NYPD. Earlier he had been told the department didn’t want to promote him, no matter what he did on his exams, so right away he knew that his time with his unit was over.

Amaro is leaving the show and according to him he wants to start over in California with his family. Yet thanks to Amaro, Benson’s adoption was allowed to go through. Without Johnny hanging around, Noah officially became hers.

So, despite everything else, something good did come out of all of this. And next season we could be looking at new face to replace Amaro.