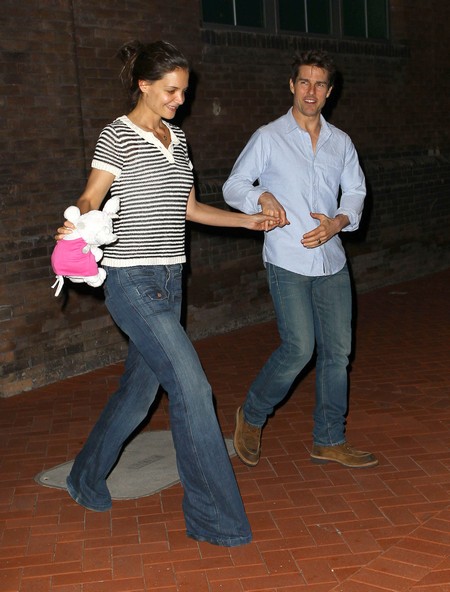 Leah Remini is revealing even more Scientology secrets in a controversial interview with “20/20.” In the interview, Leah talks about interactions with Tom Cruise and his ex-wife Katie Holmes, who has since defected from the church herself.

Remini has made huge waves lately after the release of her new book “Troublemaker: Surviving Hollywood and Scientology.” The former Scientologist has been shunned by family and friends within the church after her departure. Now Leah Remini’s new tell-all is so damaging to the Church of Scientology that reports say even Tom Cruise was worried about what secrets she would spill.

In the tell-all, “Troublemaker,” Remini recalls a time she received disciplinary action from the Church of Scientology after she offended Tom Cruise and Katie Holmes. Leah Remini recounted how she was invited to Tom’s home to teach salsa dancing to Tom and Katie.

According to the story, this all happened before Tom Cruise and Katie Holmes were married. The lovebirds started making out in front of Leah Remini, prompting her to jokingly tell Tom and Katie to “Get a room!”

Leah’s joke didn’t go over well and the “King of Queens” star said she was reprimanded for speaking out about the (gross) PDA session. In Scientology, when a member does something out of turn, other members are encouraged to tell on them to the church with what is called a “Knowledge Report.”

The ABC news show teased viewers in the previews with Katie Holmes’ response to Leah Remini. They made it sound as if Holmes had also agreed to take part in the interview. After seeing the “20/20” interview with Remini, Katie Holmes’ camp did respond but it was not what we expected.

Holmes never interviewed with “20/20” or responded to anything that Leah Remini said. Instead, the “Dawson’s Creek” star gave a simple statement: ‘I regret having upset Leah in the past and wish her only the best in the future.

That wasn’t Katie Holmes trying to re-friend her former friend with a big apology. Katie Holmes’ statement was a brush off. Despite what the news shows or the headlines try to say, Katie Holmes and Leah Remini are not bonding over their decision to leave Scientology. As a matter of fact, Katie Holmes isn’t saying anything about the Church of Scientology. We wonder what’s keeping her from opening up?