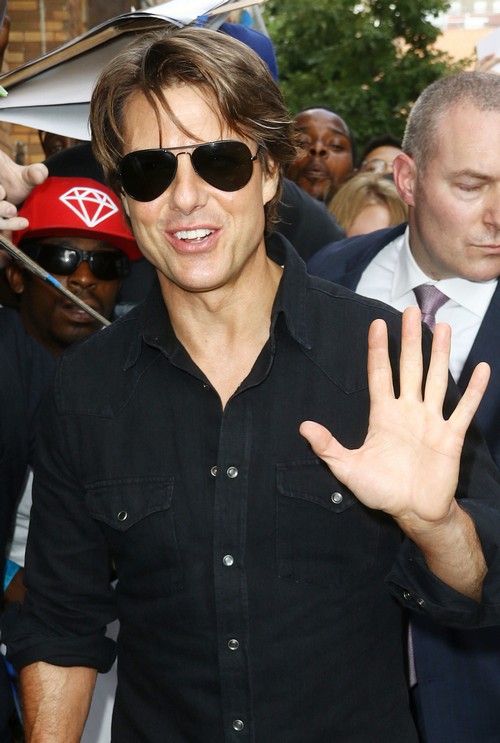 Good thing Suri Cruise has a dedicated mom in Katie Holmes because Tom Cruise has made himself noticeably absent in her life over the last two years. It’s rumored to be more than three months since Tom last saw daughter Suri and then for only a brief period – and it’s apparently all about Scientology that’s keeping him from his little kiddo.

Because Katie Holmes walked away from Scientology when she walked away from Tom, that makes her a Suppressive Person – someone who is supposed to be ignored and treated, essentially, like the worst of the worst. But Tom can’t keep that up when Katie has full custody of his daughter. So he’s been in a dilemma between wanting to be a good father and the rigorous demands of the Church of Scientology plus his busy movie career.

According to OK! Katie Holmes was on hand to supervise the brief three hour playdate that Tom snuck into his hectic Mission Impossible promotional schedule. While Tom makes an explicit effort to speak to his daughter often on phone and video chat, that is no substitute for him being a tangible presence in her life. Tom is missing all the milestones – her first day of school, her ballet classes, homework, birthday parties – all those normal things that Suri will remember when she grows up and will remember he wasn’t there.

The situation is so dire that Tom is taking the advice of his Suppressive Person ex Katie Holmes and is considering buying an apartment in New York City to be closer to his daughter. It’s not Katie that’s blocking Tom Cruise’s access to their daughter – it’s his conforming to Scientology expectations that he keep his distance. But rumor has it that Tom may finally be seeing the light on how many relationships in his life that Scientology has destroyed and he doesn’t want Suri to be another casualty of the church.

Tom has got to take notice that by only seeing Suri every three months, he’s literally missing her grow up – she’s changing significantly visit to visit – and Tom has told those closest to him that he feels like he’s missing her grow up. At the visit, Tom gifted Suri a large teddy bear, read some books with her and played hide and seek for a while before he had to leave for an event. Rumor has it that church leaders don’t want Cruise seen publicly with his daughter because she’s not being raised in the church.

Because Tom is in a leadership position, if he’s seen flouting the rules, the Church of Scientology won’t be able to as easily control their other followers/minions. So Tom has to either explain to daughter Suri why he can’t be there or give the church the boot and stand by his kid. At 9, Suri is old enough to realize just how often her father is gone and to start questioning him about why he’s not around more. And she deserves answers – but what will they be – sorry kiddo, I love the church more than you?

But who will win out – Suri or Scientology?