Tom Cruise Prepares To Leave Scientology for Suri Cruise: Must Abandon Religion To Have Relationship With Daughter! (PHOTO) 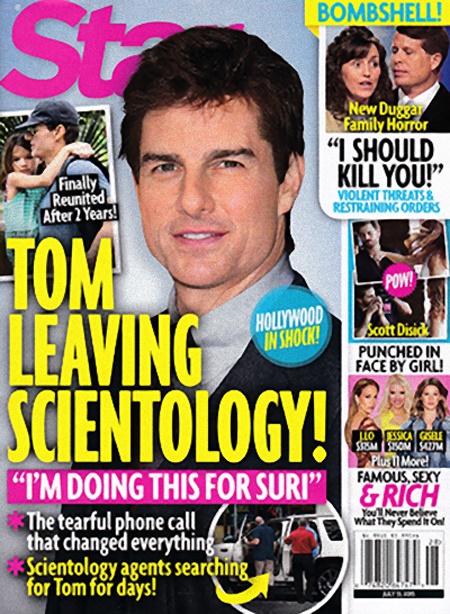 Tom Cruise is quitting scientology! The actor has been an active member in the controversial church for years – and it is reportedly the reason behind his divorces from both Nicole Kidman and Katie Holmes. Cruise hasn’t seen his daughter Suri in nearly two years, and the actor has had to make a difficult decision: his daughter or his church. Not only did Katie Holmes divorce Tom Cruise because she didn’t want her daughter raised in Scientology, but the elders at his church are trying to keep Tom away from his daughter now. According to a new report in Star Magazine, Tom Cruise has made a decision – he is walking away from Scientology so that he can be with his daughter Suri.

Tom Cruise hasn’t seen his daughter Suri in almost two years, and it recently hit him that his own daughter is virtually a stranger and he is missing out on so much of her life. An insider dished to Star Magazine “Suri was going on and on about her ballet class and how much she loves it on the phone. That’s when Tom realized that he has never even seen her perform ballet and he started to tear up. It hit him that she is growing up before his eyes and he is not there to witness most of it.”

Quitting Scientology is not as simple as it sounds though. Over the years, other celebrities have tried to defect and the leaders of the church have not let them go without a fight. Rumor has it that other Scientologists make defectors’ lives a living hell, and there have even been whisperings of physical and emotional abuse. According to Star Magazine, Tom Cruise is determined to break away though so that he can be a part of Suri’s life. Their inside source revealed, “The buzz in Tom’s camp is that he has been asking around about lawyers who can help him get everything in place before he cuts ties for good.”

Do you think that Tom Cruise will be able to get out of the Church of Scientology? Will leaving his religion be able to save his relationship with his daughter Suri, who is basically a stranger to him now? Let us know what you think in the comments below!