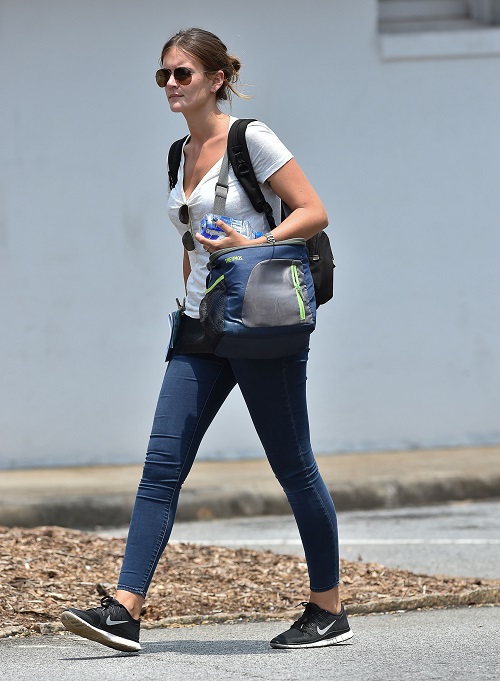 Tom Cruise has an assistant who looks exactly like Kate Holmes, his ex-wife. How many times when we break up with someone do we want to have a constant reminder of them around us all the time? I’m assuming for most of us, the answer is not very often. Seriously though, why would you want to see someone who looks like your ex 24/7 after you just went through a break up?

Well, apparently, actor Tom Cruise did not get the memo, and is one of the few people who wants to be reminded of his ex-wife, Katie Holmes. Tom Cruise has been filming “Mena” in Madison, Georiga this month, and we recently got a hold of this picture that shows Tom Cruise with his new assistant. The photo was taken on June 29, 2015, and the resemblance between Cruise’s new assistant and his ex-wife Katie Holmes is uncanny.

We aren’t quite sure why Tom Cruise would want to work with someone who looks identical to Katie Holmes, but maybe Cruise is trying to recreate an image of his ex-wife Katie Holmes to fill some sort of void that he is feeling.

We recently reported that Tom Cruise has not seen his daughter Suri in over two years due to his religion, Scientology. An inside source told In Touch Magazine, “Katie didn’t make her break from Tom with the best financial arrangement — due to an iron-clad prenup, but she feels that she and Suri got out with their freedom.” According to the source, Tom Cruise’s devotion to Scientology caused a ton of problems with he and Katie Holmes, and Holmes could not stand it anymore, so she took their daughter Suri and left.

Maybe since Tom Cruise has not seen Suri in over two years, and because Scientology ruined his marriage with Katie Holmes, he is trying to surround himself with a Katie Holmes look-a-like to feel less lonely. Either way, you have to admit it is a little weird of Tom to hire a personal assistant that resembles Katie Holmes. Let’s just hope that Cruise can find himself a new wife, and fast, so he does not continue to drive himself crazy.