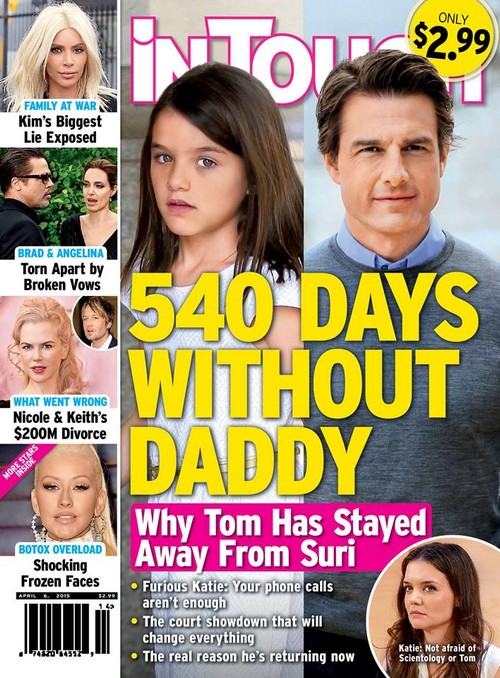 Tom Cruise has been working on movie after movie, but it seems like he’s conveniently forgotten that he has Suri Cruise, a young daughter, to look after. Sure, he doesn’t have primary physical custody of Suri Cruise, Katie Holmes does, but after all the hoopla about how he doesn’t spend enough time with her, you’d think that Tom would have learned his lesson, right? Or at least, cared enough to give the illusion that he was a good father? Well, apparently not.

According to the latest cover issue of In Touch Weekly, Tom Cruise hasn’t seen Suri Cruise in over 540 days. Katie Holmes is reportedly furious at Tom’s absence, and has even told him that his phone calls just aren’t enough anymore. In addition to that, there’s going to be a ‘court showdown that will change everything’, which might be the reason that Tom is finally returning to spend some time with Suri. Well, that and the fact that the Scientology documentary on HBO, ‘Going Clear’ is set to release in a few days. Trust me, Tommy boy is in full damage control mode because he knows what’s coming. Katie Holmes may have opened the floodgates into Tom Cruise and Scientology, but ‘Going Clear’ is set to make the dams burst, and Tom knows that he needs every bit of PR ammunition to protect his image.

In addition to the Tom Cruise and Suri Cruise cover story, In Touch Weekly also has a report on Kim Kardashian’s ‘biggest lie’ exposed – although I’m not sure which lie they could be referring to. It seems like Kim lies about everything nowadays, no?

Plus, Brad Pitt and Angelina Jolie are supposedly ‘torn apart by broken vows’, which is ridiculous considering the fact that Angelina just got her ovaries and fallopian tubes removed, and Brad was with her every step of the way. Then, there’s another story about Nicole Kidman’s $200 million divorce from Keith Urban, which is much more realistic than a Brangelina divorce.