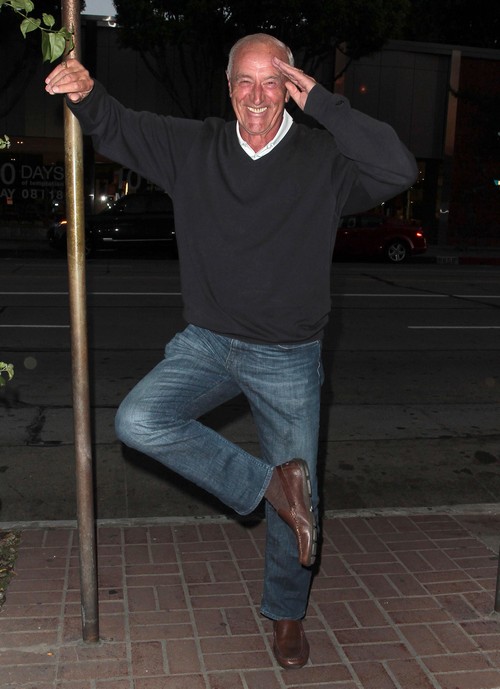 Dancing With The Stars spoilers have been teasing for months now that Judge Len Goodman is quitting the ABC dancing competition and Season 20 will be his last season. But, the Dancing With The Stars producers don’t want Len to leave – despite the fact that he is 70 years old and juggling a grueling schedule, and they are desperately trying to convince him to stick around for at least two more seasons.

Len Goodman has been serving as a judge on Dancing With The Stars, alongside Bruno Tonioli and Carrie Ann Inabra, since the show premiered back in 2005. Recently spoilers revealed that Len was bowing out and quitting the popular TV competition. According to the April 20th edition of GLOBE Magazine, the powers that be at DWTS are not ready to let Goodman go without a fight.

GLOBE reveals, “Executive Producer Rob Wade is enlisting his impressive powers of persuasion to keep 70 year old Goodman on the judges’ panel. He wants Goodman to change his life and waltz back on to the show for the next two seasons – at least as a guest judge.” In a recent interview Rob Wade revealed, “The truth is that there is still a chance that Len could be around for Season 21.”

Obviously the producers don’t want to see Len Goodman go – he is a figurehead for Dancing With The Stars and has been with the show since it began. Although ratings have had their highs and lows over the years – overall they have been solid. And, once they begin losing central members of the show and playing juggling around judges, the dancing competition could start losing some viewers. Obviously we don’t want to see Len go either, but he has paid his dues, the man is 70 years old and just wants to spend some time with his family and ailing mother – it’s time for the producers to stop guilting him and let him retire.

Do you think Dancing With The Stars will survive wihout Len Goodman? Are the producers being selfish by not letting Len Goodman quit? Or do you think he is the one who is having a hard time actually leaving? Who would you like to see replace the veteran judge? Let us know what you think in the comments below!