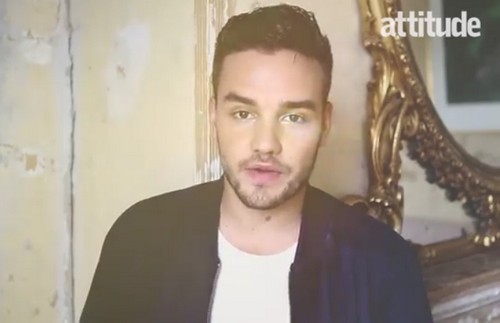 Is One Direction singer Liam Payne gay?! The Internet is buzzing with rumors that Liam Payne is preparing to come out of the closet after the pop star announced that he will be featured on the cover on the gay magazine, “Attitude.” In an official statement Attitude Magazine confirmed the cover and dished, “It’s the first solo shoot and interview any of the members of One Direction have done, their first gay press shoot and I think the only magazine promo for their new album.”

Sure, it’s interesting that Liam Payne opted to do a photo shoot for of all magazines, one of the biggest magazines geared towards the LGBT Community. Seriously, he’s Liam freaking Payne – he could cover any magazine that he wanted to. Why did he choose Attitude Magazine? While some fans think that it is the singer’s profound way of coming out of the closet and revealing that he is gay, it actually could just be some damage control after Liam was accused of being homophobic last month and let’s not forget his implicit defence of Phil Robertson of Duck Dynasty fame last year.

Liam Payne found himself in some hot water he made this comment at a concert, “This is my favorite song off the last album, and it is about trying to find that number one woman of your life, which none of you can relate to, ’cause most of you are girls. Except for the boys in here, you know what I’m talking about.” Afterwards he had to take to Twitter to clear up any confusion and insisted that he is in no way, shape, or form homophobic.

Liam Payne has actually been dating a GIRL for over a year, and is in a very serious relationship with Sophia Smith. So, the odds of the One Direction singer actually being gay are slim to none. What do you guys think of Liam Payne’s new magazine cover? Is he secretly gay, or just trying to repair his image? Share your thoughts and theories in the comments below