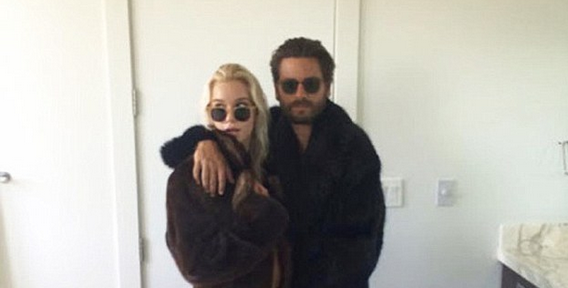 Scott Disick could care less about his baby-mama Kourtney Kardashian, and that became pretty clear when he was caught PDA-ing all over the East Coast with his new 18 year old girlfriend Lindsay Vrckovnik.

The 32 year old reality TV star is obviously very proud that he was able to reel in a model nearly half his age – and he took to Twitter to share a photo of himself and Lindsay posing half naked in a hotel room. But, the joke may be on Scott Disick – because Lindsay Vrckovnik says they are “just friends” and she has a boyfriend back home in Canada. Awkward!

The only thing more embarrassing than going through a midlife crisis and dating a girl almost half your age – is getting totally dumped by the girl half your age. According to a new report, Lindsay Vrckovnik is telling her pals that there is nothing going on between herself and Scott Disick – and he was just a thirsty old man that was following her and her hot model friends from party to party. That’s embarrassing …

TMZ reveals, “Lindsay Vrckovnik insists she’s never hooked up with Scott. She says she’s been traveling with a group of models and met Scott in NYC, and hung out for a day. The girls wanted to move the party to Miami over the weekend, and according to what she’s telling friends … Scott happily followed.”

Point for Kourtney Kardashian. How funny is it that the hot model Scott Disick tried to rub in Kourtney’s face – won’t even admit that she hooked up with Scott? We’re super curious how she plans on explaining to her boyfriend the photos of her wearing nothing but a fur coat in Scott Disick’s hotel room though.

Do you think it is as hilarious as we do that Scott Disick’s teenage girlfriend doesn’t even want to claim him? What does Kourtney Kardashian think about all of this? Share your thoughts and theories in the comments below!