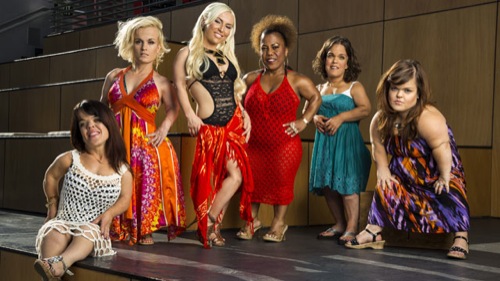 On the last episode Tonya learned Briana and Trevore had been talking behind her back and things got explosive at lunch with Trevore and his mom. Concerned with hearing her daughter was being bullied, Briana struggled with whether to tell her daughter she’s a little person. Did you watch the last episode? If you missed it we have a full and detailed recap right here for you.

On tonight’s episode as per the Lifetime synopsis, “Christy and Briana start questioning Terra’s motivations and friendships with the other women. Meanwhile, Traci struggles with her feelings of envy and Elena’s burlesque performance exposes her trust issues with her husband.”

Tonight’s episode is going to be a fun one, which you won’t want to miss. So be sure to tune in for our live coverage of Lifetime’s Little Women LA Season 2 Episode 3 tonight at 10PM EST!

Terra’s friends aren’t reacting to her news like she thought they would on tonight’s new episode. Rather than be supportive of her, most of them have come up with reasons why having the baby isn’t such a good idea. Christy and Briana think Terra was lying when she said the baby was an accident and that she must have purposely gotten pregnant in order to repair her relationship with Joe. So now those two are foretelling Terra’s future where the baby makes everything worse and how Terra’s relationship will fall apart under the strain of parenthood.

And what they’re saying is coming off as spiteful. Yet what Christy did next just wasn’t right. She finally contacted Elena after months of ignoring her once good friend and she did so to get the dirt on Terra.

Christy thought Elena knew about Terra’ pregnancy before everyone else so she wanted confirmation of that and once she did get it – she blabbed it to the world. She wanted Terra’s best friends to know Terra hadn’t turned to them first when she got the news. Even though Christy had promised Elena she wouldn’t tell anyone.

Sadly, Traci has been trying from what seems like day one to get pregnant and nothing has come of it. So she was sad to hear about Terra’s news though she states Terra would be the first to hear it if she did got pregnant because that’s how much their friendship means to her.

Terra, Traci, their men even hang out together so they were really good friends until Christy’s mouth ended up causing a rift!

Terra was already worried about her pregnancy what with the odds of the baby inheriting either hers or Joe’s version of dwarfism. But never did she think the baby was going to cause so much anger or hurt feelings. Not when this should be the happiest time of her life.

Everything unfolded after Elena’ grand showing. Elena wanted to be more confident so she signed on to do a burlesque show and she also invited her friends and her husband to come watch. Yet another dancer at the show took things too far.

This woman humped Terra’s face and sat in Elena’s husband’s lap which hadn’t sat so well with her. Hence, Elena ended up regretting the show and later having a breakdown.

So, Tonya came up with roller skating as a way to get all the girls together and help get their minds of everything that might be bothering them. And to be fair to her it started out as a good idea. The ladies were enjoying themselves right up to the point Christy talked to Traci. Which mercifully happened away from everyone else!

When Traci heard the news, she just couldn’t understand why Elena. Originally she had thought all of the women had learned about the baby the same time (she wasn’t suspicious like Christy) as the rest of them yet Christy told her otherwise and now she’s trying to figure out “why Elena”.

Traci hadn’t confronted Terra that night – she probably wanted to wait until after Terra had her appointment with the OBGYN but next week’s promo shows no one is going to be holding back then.

So will next week’s episode be the end of really good friendships?