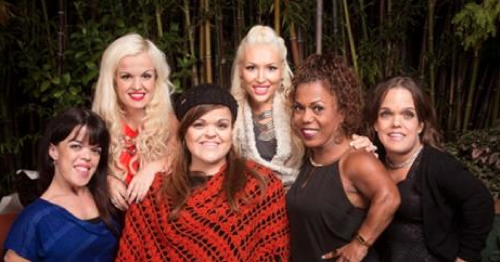 Tonight on Lifetime LITTLE WOMEN LA airs with an all new Thursday, January 7, season 2 episode 2 called, “Mama Drama.” On tonight’s episode, Tonya learns Briana and Trevore have been talking behind her back and things get explosive at lunch with Trevore and his mom.

On the last episode the Little Women embarkrf on a booze cruise, but it’s not all smooth sailing. Traci accused Briana of lying about why she didn’t attend Traci’s wedding, but were Briana’s mysterious medical reasons true? Terra gets an offer that could change her career, but it would require a huge sacrifice she might not be willing to make. And the baby race was on between Elena, Christy and newly married Traci. But after a pregnancy test came up positive, the question was, who’s pregnant?!? Did you watch the last episode? If you missed it we have a full and detailed recap, right now for you.

On tonight’s episode as per the Lifetime synopsis, “Tonya learns Briana and Trevore have been talking behind her back and things get explosive at lunch with Trevore and his mom. Concerned with hearing her daughter is being bullied, Briana struggles with whether to tell her daughter she’s a little person.”

Tonight’s episode is going to be a fun one, which you won’t want to miss. So be sure to tune in for our live coverage of Lifetime’s Little Women LA Season 2 Episode 2— tonight at 10PM EST!

The last we saw of them, Terra had just told her longtime on and off boyfriend that he was going to be a dad. And while his initial reaction left a lot to be desired – that appears to be a merely misunderstanding. He actually wasn’t upset about the pregnancy because once the news fully sunk in and the shock wore off then that’s when he started to act like the proud papa he was soon to be.

Joe was excited about having a baby. He’s always wanted one and though the couple is in a unique position with this pregnancy – neither of them ever really doubted they wanted to be a family.

But now we’re both parents are wondering about how they’ll raise their child. Little People have a higher chance of having a child that will inherit their same condition or something similar. And it’s not easy raising a Little Person. Briana is already dealing with issues stemming from her own daughter having dwarfism.

The little girl is still young so as of yet she doesn’t even know she has dwarfism but she’s being bullied. And stuff like that tends to bring up a lot of ugly memories for Briana. She knows what it’s like to be bullied and she’s never wanted that for her child. Hence, her holding off on the dwarfism conversation, but facts are facts and Christy has told Briana that she should just tell her daughter the truth.

Christy told her own children the truth and they didn’t suffer for it. They simply adjusted like all other kids do.

However Christy might not be the best person to turn for advice. Especially, as she someone that would deliberately go behind her husband’s back to buy onesies for a child they hadn’t even had yet. She knew Todd was afraid to jinx them and apparently she just didn’t care.

She saw the onesie and thought it was cute so she secretly bought it!

Though, at least she didn’t stealing the onesie from the store. For it seems that Briana is being accused of doing something along those lines. Earlier, Briana reached out to Tonya. She had told her friend that friend’s latest boyfriend has been hitting on her.

Tonya and her friends were skeptic when they heard but Tonya wanted to hear the story (the full story) face to face. So Tonya heard her out and unfortunately it doesn’t look like Briana is either lying or being overdramatic. Tonya’s boyfriend has bit of a reputation for being sleaze ball and yet Tonya didn’t want to confront him on it seeing as she was going to be his mother for the first time. But she brought up Briana after she realized how much her relationship has been one-sided.

For a man that claims he wants to move in with her, Tonya’s boyfriend kind of backpedaled on how committed he was when his mother was there!

It seems that he never really mentioned Tonya to his mother and she had no idea they were serious about each other. But after Tonya felt ridiculous for being so nervous about the lunch – she got angry – at the boyfriend. She started to critique him and then he brought up Briana.

Afterwards, the boyfriend and his mother left in a hurry. They no longer felt they were welcome at Tonya’s house. And its doubtable her boyfriend is ever going to call her to explain the messages to Briana. So that’s entire relationship is over with. Though, thankfully, jeopardize a friendship.

Tonya hold no ill-will against Briana and later when they saw each other at Terra’s get together – they hugged like everything was ok and Tonya even gave Briana permission to tell the other ladies the full story.

Everyone had convened at Terra’s house and they were shocked by what Tonya’s boyfriend had tried to do. But her news was nothing comparison to Terra’s. Terra was going to tell her friends she was pregnant and she decided to do so by putting little toy pacifiers on top of the cupcake desserts.

When her friends found out, they were a mixture of excited and jealously hurt. Everyone that’s not trying to have a baby (Tonya, Elena, and Briana) were able to be enthused. And as for Traci and Christy, they were upset Terra managed to get pregnant before they did.

Although, Christy ended up taking it better than Traci. Traci had honestly cried and not for joy.

Meanwhile, Elena has finally come to decision about having kids and surprisingly Terra helped her know that she wasn’t ready or children yet.