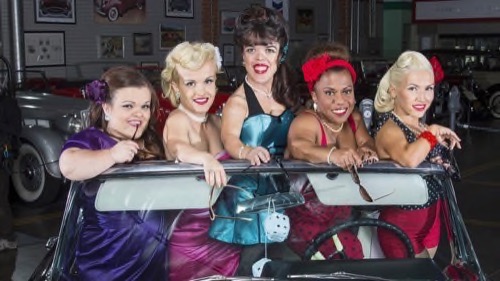 Tonight on Lifetime LITTLE WOMEN LA airs with an all new Wednesday, March 18, season 2 episode 12 called, “Friendtervention,” and we have your weekly recap below. On tonight’s episode, Newly engaged Briana is bombarded by her friends’ concerns after Terra, Tonya and Traci take it upon themselves to do a background check on her new fiancé.

On the last episode Tension mounted as the gang anticipated the arrival of Terra’s boyfriend. Meanwhile, Todd and Christy argued after he sided with his ex-girlfriend Briana instead of backing up his wife; and Briana fell hard for her new Internet boyfriend, much to the dismay of the other ladies. Did you watch the last episode? If you missed it, we have a full and detailed recap right now for you.

On tonight’s episode as per the Lifetime synopsis, “Newly engaged Briana is bombarded by her friends’ concerns after Terra, Tonya and Traci take it upon themselves to do a background check on her new fiancé. Their shocking finds are too much for Briana to handle, and she struggles to decide whether or not her relationship is strong enough to withstand his past record. Elena’s clothing line for both average size and little people starts to take shape, but as people start questioning her vision at the photo shoot, the pressure could prove to be more than she can handle. And as Terra’s pregnant belly grows bigger each day, Traci and Tonya’s attempt to throw her a magical baby shower turns into a rainy nightmare.”

Tonight’s episode is going to be a fun one, which you won’t want to miss. So be sure to tune in for our live coverage of Lifetime’s Little Women LA Season 2 Episode 12— tonight at 10PM EST!

Briana is going to have to face some harsh truths on tonight’s all new episode of “Little Women LA” all because in a move that has baffled her friends, she’s recently become engaged to Matt. The very same Matt she barely knows and the one she’s been fighting with her family about. So her friends (Terra, Traci, and Tonya) ended up doing what they thought was best and they conducted a background search into this new fiancée of hers. And what they found was a long track record of violence.

Matt has assault charges and even a domestic violence case on his record. And out everything the girls read, it’s the domestic charge that frightens them the most.

You see they don’t want their friend to get hurt. And yet every reservation they voice so far has fallen on deaf ears. So the only way they could force Briana to see the truth was to confront her with it.

They all stopped by her house on the day she was moving into her new apartment and they told what they found. And by they I’m even including Christy. Because although she didn’t know about the background search – Christy has her own concerns about Briana’s relationship.

In fact everyone that’s met Matt has gotten bad feeling off of him and so finding out about the anger issues wasn’t that much stretch on the imagination. But only Briana seemed to think his bad boy phase was just that – a phase. She actually tried to tell her friends that when they told her about his rap sheet.

Yet, no one was buying the whole bad boy thing. In their minds, he was just too old to use that as an excuse anymore and before Briana allowed him into her daughter’s life – they wanted her to figure that as well.

But while they were waiting, Terra’s baby shower was fast approaching and her friends didn’t want the expectant mother to tire herself out planning it. So they volunteered to do it themselves. And what they found out, much later that is, is that planning a party is harder than it looks. Especially when there’s so many opinions involved.

Traci wanted to do a fantasy theme shower and Tonya thought she was taking things too far. Yet, funnily enough, it was then Tonya’s turn to overreact when she was later helping her friend Elena.

Elena was finally ready to debut her new clothing line but, as it turns out, the line that was originally only supposed to be for little people now includes sizes for average every day shoppers. So Tonya was upset by that. She thought little people were going to get their own line for once and her friend compromised on her principles behind all of their backs.

That doesn’t mean she didn’t model for Elena but she was still kind of hurt afterwards.

And as for the baby shower, Traci didn’t listen to Tony and the result was the baby shower ended up happening outside during a rainstorm. Thankfully, the tables and decorations were all protected underneath a tent. Yet the fantasy theme was sort of thrown out the window because of what was going on.

Besides the rain, Briana had to come to the shower dateless. Apparently she had called off her engagement to Matt when she said they needed a break and now she’s technically single again. Single, but in her case unhappy.

It seems that in the beginning, she thought she and Matt were the modern day Bonnie and Clyde. But with both her family and her friends actually against them and worried for her, she ultimately felt like their relationship wasn’t worth fighting for her. So she called it off and now the only person that felt like she should have defended Matt was Elena.

Elena hadn’t been at the impromptu intervention but she heard about it afterwards and according to her, Briana should have stood up for herself instead of letting her friends talk her into something she clearly didn’t want.

However, in spite of how she felt, Briana didn’t ruin Terra’s day and so the expectant mother didn’t hear about her relationship woes. She just hung out with her friends and celebrated the news she was having a girl.