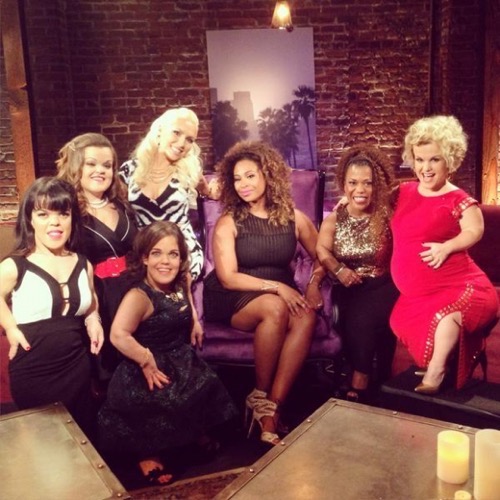 Tonight on Lifetime Little Women LA airs with an all new Wednesday, April 1, season 2 episode 14 called, “Reunion Special Part 2,” and we have your recap below. On tonight’s episode, the reunion continues.

On the last episode the girls of Little Women LA got together for a reunion, where they talked about events during the current season together. Did you watch the last episode? If you missed it, we have a full and detailed recap right now for you.

On tonight’s episode as per the Lifetime synopsis, “The cast of “Little Women: LA” gets together to revisit the most exciting and dramatic moments from this season as well as provide a sneak peek of what the future holds.”

Tonight’s episode is going to be a fun one, which you won’t want to miss. So be sure to tune in for our live coverage of Lifetime’s Little Women LA Season 2 Episode 14— tonight at 10PM EST!

Ray asks Lila what she was trying to say last time. Lila says that when she was away and hearing Joe’s words, it was hurtful. She says when you give yourself to someone emotionally, you have a bond. Ray asks if it’s because she and Joe have a history, and Lila says yes.  Tonya says it was a one-sided history, saying Joe told her.

Tonya says she doesn’t trust Lila, and she wanted to beat her ass in Catalina. She says she didn’t drag her ass around Catalina because she didn’t want to catch a case. Lila asks her if she memorizes her comedy lines. She asks Tonya why she has to be so ratchet, which sets her off. Tonya says if she wants to be ratchet she’s going to.

Tonya tells Lila to take her ass back to New York, and when Lila tells her to shut up, Tonya gets up. Terra restrains her.
Lila compares Tonya to a cockatiel.

The camera follows Lila on the street as she sobs about being ganged up on. She goes and jumps into the arms of one of her friends from Little Women NY.

Clips of the love triangle between Briana, Tonya and Trevor are shown. Ray asks why Tonya stayed with him if she wasn’t sure whether he was Mr. Right. Tonya says eventually she reached a point where she didn’t want to be around him. She says she was a narcissist and a social media whore. “He would take a selfie in their bed and then hastag it #LittleWomenLA,” Terra says.

Ray asks if she thinks he was a fanboy, and Tonya says yes. She says she knew when he tried to rush her to move in with him.
They then discuss the fact that his mother didn’t know that the two of them were in a relationship. She says as soon as she said that, she knew it was over.

Ray asks Briana how it felt to be called a liar. She says it’s funny because why would she lie. Also, Tonya is her friend.

A viewer says that Tonya was harsh on Briana for being thirsty for men and putting up with shit, asking Tonya if she doesn’t feel she did the same thing with Trevor. Tonya admits that she did.

Briana’s controversial relationship with Matt is discussed. Briana starts tearing up, describing all the pain she went through with her friends and family disapproving of her relationship. She says she gets they’re concerned, but she’s not going to rush into anything and will be smart.

Matt says he can understand the concerns that anyone would have. He says he was always honest with Briana and did evetything from the heart, saying it was their connection that mattered.

Terra says that he had added her on Facebook when she was going on Jackass, and once the show was over, he unfriended her.
Ray asks Matt if he may have a fetish and if he’s dated little women before. He says the shortest has been around 4’10”.

Tonya says the red flag for her was him trying to get engaged before even meeting Briana’s family. She says she never said she wanted them to break up, only to slow down.

Matt says he made a mistake recently that hurt her. He says he talked to another woman, having a conversation via text, which he admits involved sexting. Ray asks if he cheated on her, and he says he sort of did. He says that’s where it was going to go, but he stopped. He says a person either puts in the work to become a better person or not, and that he wants to be the best man he can for Briana.

Ray asks him what was on the background check. He admits he was arrested once for domestic violence. He says he was dating a woman whom he found out was married and had several warrants out for her arrest. He says she attacked him, but he didn’t put his hands on her.

He also admits to being arrested for drinking and driving, but he says he hasn’t drank in two months. Christy asks him if he’s been going to any sort of group, and he says that he just hasn’t drank and that he knows different people have different relationships with alcohol.

Briana says she will step back a lot, put things on hold and let Matt do what he needs to do. They both say there won’t be marriage any time soon. “I wouldn’t even pretend to ask her that,” Matt says.

The men come out on the stage, and clips of their fights are shown.

Todd says he said his apologies, and that he apologized to everyone but Joe, who refuses to take his apology. Terra says he only did that because he knew he had to walk down the hill with them. She says she didn’t even want to talk to him because she was scared. He says he told them that it wasn’t for the camera and was a genuine apology.  Terra says he didn’t apologize until everyone could see him do it.

Todd says he would like to see people reach out to his wife the way he’s reached out to people. Joe says everything he said was in retaliation, and that shortly before that everything was fine. He says he doesn’t know why Todd had to come after his “girl” and his unborn child. He tells Todd that he will never be the seventh little woman no matter how hard he tries and to stay out of the women’s business. He says to let them fight amongst themselves because it’s funny.

Christy says Todd was hurt by the remarks about his weight. Joe says he struggles with weight too, and he apologizes for saying that. He asks why Todd was bashing a pregnant woman, and that Todd never made a real apology off camera.  “When he spouts off about my unborn kid, he’s a piece of shit,” Joe says.

Todd says he didn’t apologize off camera because Joe never apologized to his wife. He says the only time Joe apologized to her was now, and there seems to be a lot of cameras around.

When asked about his part in it, Erik says all he did was try to keep Todd off Traci.  Christy says she pulled Todd down and got on top of him.

He says Todd pushed Traci down, and that if he had let him come over and just “talk,” the situation would have been a lot worse.

Christy says this behavior is “disgusting,” and Joe mocks her. He then says everyone is a loser here and not to take offense because they’re all bullied. Christy says it hurts to be called fat and Miss Piggy.  Joe says his unborn child was attacked, and that Christy plays the victim. Christy asks if they can’t all say sorry and let it go.

Everyone agrees to wash their hands of it and let it go.