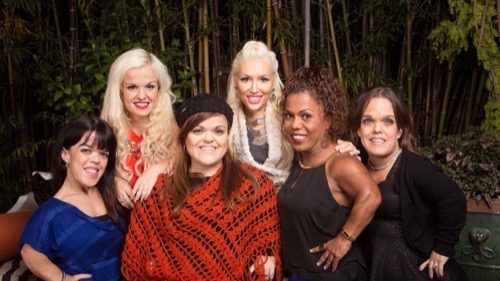 Tonight on Lifetime Little Women LA airs with an all new Wednesday, March 25, season 2 episode 13 called, “Reunion Special Part 1.” On tonight’s episode, the girls of Little Women LA get together for a reunion.

On the last episode newly engaged Briana was bombarded by her friends’ concerns after Terra, Tonya and Traci took it upon themselves to do a background check on her new fiancé. Their shocking finds were too much for Briana to handle, and she struggled to decide whether or not her relationship was strong enough to withstand his past record. Elena’s clothing line for both average size and little people started to take shape, but as people start questioning her vision at the photo shoot, the pressure could prove to be more than she can handle. And as Terra’s pregnant belly grew bigger each day, Traci and Tonya’s attempted to throw her a magical baby shower turned into a rainy nightmare. Did you watch the last episode? If you missed it we have a full and detailed recap, right now for you.

On tonight’s episode as per the Lifetime synopsis, “the girls of Little Women LA get together for a reunion, where they will talk about events during the current season together.”

Tonight’s episode is going to be a fun one, which you won’t want to miss. So be sure to tune in for our live coverage of Lifetime’s Little Women LA Season 2 Episode 13— tonight at 10PM EST!

Tanika Ray hosts. She asks Terra how her life has changed being pregnant. Terra says it’s been a whirlwind and made her rethink her life, but has been nothing but a positive experience.

With the baby coming in an hour and a hald, Ray asks how serious of a situation Terra is facing. Terra says she is hopeful and she and Joe are going to handle it no matter what happens. She describes a mild blackout she had where she couldn’t see out of her left eye for nine minutes and had severe pain in her lower abdomen because of the baby.

Ray asks Christy if she is questioning how solid Terra and Joe’s relationship is, and she says no and that she wishes them well. Terra says she doesn’t buy what Christy’s kumbaya act.

Terra says she told Elena about her pregnancy first because she just needed to tell someone. Tonya says she was offended Terra told Elena before her, Terra’s best friend.

Elena says sometimes Christy has to acknowledge the things she did wrong. The women call her an instigator, and Christy denies it, saying she didn’t know that was going to happen.

A viewer asks Christy if she really thinks ‘bully’ is the right word for the people she uses it to describe. Terra says she thinks that word is too strong because everyone is friends. Christy says she considers it bullying when it is done repeatedly. Briana says she isn’t saying it’s right to call people names, but it happens. Traci says Christy was like a broken record with accusing people of bullying.

The topic switches to Christy’s and Traci’s struggles to get pregnant.  Traci reveals that she had a second miscarriage in December, saying it was a lot harder because it was on Christmas day. She says she wishes she had been trying when she was younger because she knew it would be a lot easier like it was for Terra, but it wasn’t in God’s plan and she didn’t find her husband when she was five years younger, so it is what it is. However, it does give her hope that she can get pregnant and keep it.

Ray asls Christy if there is a race to have a baby, and she says no.  Tonya brings up Christy’s marriage. Traci says it’s all Christy’s personal insecurities and that she has always been trying to one up her on things.

Terra says Christy wants to be the first for everything, and it’s harder for her when someone does something first, which is maybe why her marriage to Todd happened so fast.

Christy says it isn’t a contest and she wants the other women to have babies, but her focus is herself having a baby.

The argument between Todd, Joe and Terra is shown. Terra says that night never would have happened if she weren’t attacked by Todd, saying her family was attacked by Todd and she understood why Joe was so upset. She says they didn’t think anyone would ever get physical, saying she was “petrified shocked” that Todd started to come over to them. She says Todd attacked her at the bonfire because he had had too much to drink.

Christy says it is an excuse to call her Miss Piggy. Terra says her husband attacked her unborn child. Elena says it got heated because Terra doesn’t control her mouth and said offensive stuff to Todd, who then got personal with her.

Christy says both sides had big mouths and there’s no good in any of it. When she asks Terra if Todd ever apologized, Terra yells no and says that is why Joe still has anger.

Christy says she thought Todd apologized to her and she’s sorry about that, but brings up the disgusting names she was called. Christy says she thinks everyone was guilty in this situation, but Terra says she doesn’t feel like any of the men should have been brought into the situation and the fact that men came in made everything dirty and it escalated to a point that harmed their friendship. Christy agrees the men should stay out of it.

Ray asks Christy why she thought it was important to bring Lila to the party. Christy says they were longtime friends, and she never would have invited her had she known that there would be drama. Terra calls bullshit, saying that Christy was asking Lila about Joe’s penis. Christy says that Lila made the history between her and Joe sound like nothing. Terra says the two of them hooked up when she and Joe were on a hiatus, and Joe realized he had stalker-like tendencies.

Christy says she didn’t know anything about that and that Lila had said she wanted more friends.

Ray says Christy had to have known bringing Lila would cause drama. Christy says Lila told her they hadn’t seen eachother for years.

Terra says the fact that Lila had people believing her lies is what was hard for her. She says that something is wrong with her, saying Lila would send crazy text messages saying things like she hopes Terra stabs Joe in his sleep and then would act normal the next day. Christy suggests that Lila’s issues could possibly be related to her alcoholism.  Tonya says she has some things to say to Lila.

Lila finally comes out. When asked if it’s her nature to start trouble, she says she hopes not. Lila says she felt ostracized and unaccepted in the group, which reminded her of being hazed at a slumber party as a kid. Terra interrupts her and says no one cares, and that the host is asking about her on the show.

Lila says she came back to LA to get some R&R and met up with Christy, a friend. Traci says she thinks Lila came with the intent to break up Terra and Lila, and that Lila is known to do things like that. Lila says she doesn’t know her, but Traci says she has known her for years.

Tonya says Lila came to her party to get with Joe, and the other women agree. Lila says that Terra and Joe were having a separation and they had a great time. She says it was nice and Joe was good to her, but what he says when her back was turned really kills her. When Ray brings up Lila calling Terra a homewrecker, Terra says she doesn’t think Terra wants her to say that. Terra says Lila can say whatever she wants about her.

When pushed, Lila admits she was texting Joe, but says they were talking business. “The business about trying to get a relationship with him, that kind of business,” Traci says.

Terra says she doesn’t think anyone should be texting someone’s husband in the middle of the night.

A viewer asks Terra if she’s just mad at Lila or also mad at Joe. Terra says there’s no way in a million years she is mad at Joe. She says Lila wished death upon Joe and told him he caused his own father’s death. Lila says he knows she didn’t say that and she doesn’t know what would fuel her to say such a horrible thing when the two of them have been cordial. Terra says maybe she did it when she was drinking. Lila says there would be a history on her phone, and that it could have been a different girl but just changed the name. She says Joe isn’t the type of man Terra thinks she is, saying that Joe likes women and asking Terra if she thinks that’s the kind of man to be a father.