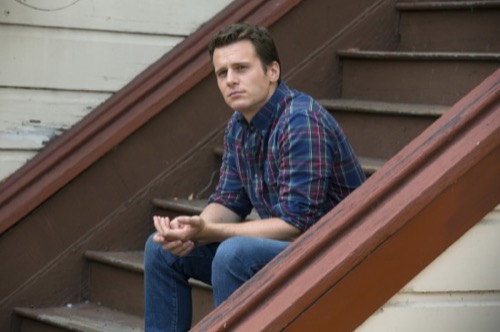 Tonight on HBO Looking continues with an all new Sunday January 25, season 2 episode 3 called “Looking Top to Bottom,” and we have your weekly recap below. On this evening’s episode, Patrick [Jonathan Groff] prepares for an important milestone with Kevin [Russell Tovey], who wants to keep their relationship a secret even though he’s planning to attend Dom’s rugby match.

On the last episode, after reminiscing over their childhood obsessions, Patrick and Kevin (Russell Tovey) decide to developed a gay game app on the side, but Patrick soon descended into a panic spiral when he discovered a small rash. Dom scoped out a location in the Tenderloin for a peri peri chicken take-out window; Doris (Lauren Weedman) was chatted up by a cute political aide; and Agustin made plans to meet up with Eddie (Daniel Franzese), the “bear” he met at Russian River, but gets sidetracked by an old co-worker. Did you watch the last episode? If you missed it, we have a full and detailed recap right here for you.

On tonight’s episode as per the HBO synopsis, “Patrick prepares for an important milestone with Kevin, who wants to keep their relationship a secret even though he’s planning to attend Dom’s rugby match. Meanwhile, Agustín expresses his gratitude to Richie; and Dom wonders if Lynn really supports his restaurant dream while having breakfast with Doris and her new fling.”

Tonight’s episode of Looking kicks off at an office party – they have a going away party for a girl at the office. Patrick and Kevin steal pieces of cake and head up to the roof. Patrick says that he can’t hang out with Kevin that week because he has to go to Dom’s first gay rugby game. Kevin says he wants to come with him – and Patrick is thrown for a loop.

Agustin heads home, and Patrick is frantically cleaning the apartment. He reveals that Kevin is coming over and spending the night – he is having a panic attack. He doesn’t know if he and Kevin are going to have sex or not. Agustin reassures him that it will be like a test drive. They head to the pharmacy to pick up a douche bottle so that Kevin can be prepared for the night. Kevin notice that Agustin’s beard looks better, he confesses that he visited Richie at the barber shop and they talked.

Meanwhile, Dom is at home in bed with Lynn. He rants that Patrick is bringing Kevin to his rugby game, and he is scared he is going to look foolish because he has no idea how to play. Dom’s roommate Lucky runs in and climbs in bed with them and reveals that she has been having sex with Malik all night. They all head out to lunch together, and Dom slips up and says he got a job offer to manage a restaurant for Jack. Lynn is shocked that Dom didn’t take the job – and thinks that he made a big mistake.

At home Patrick is sitting outside waiting for Kevin to come over. When he arrives, Patrick tries to convince him not to come to the rugby game. Kevin doesn’t want to hear it, he wants to stick to the plan. They decide to stop at a bar and get some “liquid courage” before they go to Dom’s game. Kevin tells Patrick about what he did as a child when he was growing up in England.

At the rugby game, Agustin, Eddie, and Lucky are already there cheering on Dom – even though they have no idea what is going on. At the pub Kevin drops a bomb on Patrick – and reveals that if he doesn’t get married, he will have to go back to England. Patrick is obviously bothered by what he said, but they head to the rugby game to watch Dom. Eddie asks Kevin if he has a boyfriend – and he says that his bf is out of town, and his name is John. Patrick pretends to not be listening. Agustin and Eddie head to the bathroom, and Agustin reveals that Patrick and Kevin are having a “f—k fest” at the apartment so he has to stay with him at the shelter. While everyone is cheering for Dom, Patrick and Kevin sneak off to make out underneath the bleachers.