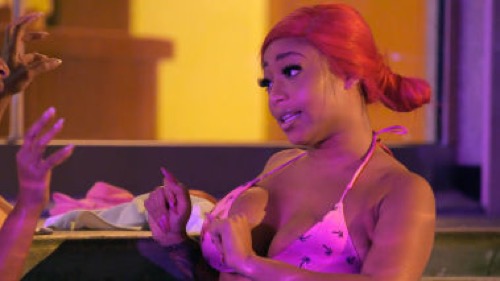 Tonight on VH1 their series Love & Hip Hop Atlanta continues with an all new Monday June 29, season 4 episode 10 called “Friends With Benefits” and we have your weekly recap below. On tonight’s episode, Yung Joc wants to make up with Khadiyah.

On the last episode, Mimi came clean to Ariane; Joseline and Stevie perform at the opening of Tony and Kalenna’s club; Margeaux dropped a bombshell on Nikko; Khadiyah had news for Yung Joc; and Momma Dee got the surprise of her life. Did you watch last week’s episode?  We did and we recapped it right here for you.

On tonight’s episode as per the VH1 synopsis, “Yung Joc wants to make up with Khadiyah; Kalenna looks for a new manager; and Jessica Dime has a showdown with her old friend Joseline.”

Yung Joc is now crashing on Rasheeda and Kirk’s sofa after being dumped by KD. Rasheeda is already telling him he needs to go home. He tells her about the fight and being kicked out of the house. He reveals that he went to Sina’s house after being kicked out. Rasheeda tells him he’s never going to have a peaceful relationship with KD if he’s going to be bouncing back and forth between women. She tells him he needs to fix this. Joc tells her to tell KD that he is suffering and misses her. She asks him if he is really serious about her, because that’s the only way she’s going to help him. He says that helping him will get him off her couch, and she says that’s going to happen anyway.

Rasheeda and Kirk go to the kitchen, and Rasheeda tells him he needs to get things in order.
Yung Joc comes in and starts taking orange juice and food out of their fridge.

Jessica is meeting up with Dawn for advice because her trial run with Mimi as her manager is not going well. They discuss Mimi’s bad behavior at the waist trainer party, and Jessica says she’s over Mimi but she made a deal with her to work with her for 90 days, which she is going to honor. She says Stevie hasn’t been around, and Dawn says that he hasn’t done anything since Reagan was in office.

Dawn tells Jessica that she is snatching her up, promises her that within 30 days she will get her $50,000-75,000 just in appearances and other work.

Mimi calls Ariane because she feels guilty about not having lied for an entire year about her sex tape with Nikko. Mimi says when she first got involved with Nikko, she knew Ariane didn’t like him. Ariane asks Mimi what specifically she lied about. Mimi says she lied about The Bahamas and the losing of the camera in the luggage at the airport. She says she lied because she felt like she couldn’t trust her because she is “judgmental as fuck.” Ariane questions the idea that of all people Mimi couldn’t trust her.

Mimi starts crying, saying she is baffled about the Margeaux situation.

Ariane says she believed Mimi and sided with her, so she can’t blame Margeaux for standing by her man of several years.

She says she is going to stand by Mimi, and the two hug.

Kalenna is meeting with Wocka Flocka Flame’s mother, Debra, to revitalize her music career. She says Tony had given her the advice to go to Atlanta and write after her group disbanded. She tells her that she has over 200 records on her computer that he won’t let her lay down, while he is working with other artists.

She says there is no more sitting down, and he told her she is on her own. She says she needs a manager of a certain caliber.

Debra agrees to be her manager if Tony is really serious about dropping her. She also tells Kalenna that she and Tony should just be husband and wife without involving business in it. Kalenna starts crying, and Debra tells her she needs to get some help.

Jessica tells Karlie that Mimi isn’t doing anything for her as her trial manager. She says Mimi has yet to produce anything.

Karlie says in confessional that all this time she thought Jessica and Stevie had been working together, only to find out now that they haven’t met. She says that’s good because Joseline has specifically stated she doesn’t want her man working with any other artists.

Karlie tells Jessica the fact that Joseline told her she and Jessica weren’t friends, only “locker buddies” at the strip club, and she barely knows her. Jessica says if she’s going to be truthful about that situation, Joseline is really her trick.

Jessica says in confessional that Mimi pays top dollar to look at and touch her. Karlie says that must be why Joseline has been pretending not to know her.

She tells Karlie that she could have taken Joseline’s man if she wanted, discussing an occasion when the couple went to the club together and Stevie was told Dime she was beautiful and wanted to have a baby with her while Mimi went to the bathroom.

Jessica says if she finds out Joseline is messing with her career, it’s going to go down.

KD is showing Rasheeda a potential spot for her shop.

Rasheeda says in confessional that her real objective for the day is getting Joc off her couch. Rasheeda asks KD if she knows that her man has been sleeping on her couch for the last several days.
KD says no, laughing.

KD says in confessional that she thought he was crashing with one of his baby mamas, but she is happy to find out that he was at the couple’s house.

Rasheeda tells KD that Joc is really sincere, realizes how badly he messed up and wants KD back. KD says she really hopes that is the case and respects Rasheeda so she will listen to him, but at the same time she cannot forget the things Joc has done.

Mimi arrives at Ariane’s house, and upon seeing snacks, realizes she isn’t the only one who will be coming over. Ariane reveals that Margeaux is the other guest.

Ariane says in confessional that the two are so busy being mad at eachother that they’ve forgotten Nikko is the one who has done them both wrong.

Ariane and the two women sit down, and Ariane tries to mediate by saying that everyone is tired of this so they should all be tired of it together.

Margeaux says she doesn’t have an issue with Mimi, and was dragged into something that she didn’t do. She asks Mimi if she knows was frustrating it was to be known as the secret wife of a man who made a sex tape with another woman.
Mimi brings up the fact that Nikko did not tell her about his wife for the duration of their affair.

Margeaux says Nikko didn’t tell Mimi about having a wife because he wasn’t cheating on her and they were not together at the time. Mimi says that Nikko was with Margeaux every time he went to New York.

Margeaux tells Mimi that she doesn’t respect her, telling her to stop talking to her.

“Why is it that the men you’re with don’t want to be with you?” Margeaux asks, saying that Mimi is too abrasive.
She calls Mimi an idiot, and tells her that she doesn’t value herself. As Ariane walks her out, she calls Mimi a loser repeatedly.
“Fuck you bitch,” Mimi says as Margeaux exits.

KD meets up with Joc to find out how sorry he really is.

He gives her a giant bouquet of roses, and she asks “Did somebody die?”

Joc tells her he never met a woman like her, and she asks him where this is coming from because she hasn’t seen “loyalty or consistency” from him. He says he isn’t asking for her to come back today, even though he would get back together with her. He gives her a gift of furry red handcuffs.
KD is amused, and cuffs Joc’s hands together.

She asks Joc where he was staying before he went over to Rasheeda and Kirk’s house.
He admits after some trepidation that he stayed at Sina’s house. She asks if they had sex, and he says that he doesn’t want to answer the question. In response, KD spills a glass of water on him.

He tells her he wants her back so badly, loves her and wants to come back home. She says she doesn’t think that’s possible this time and she is emotionally exhausted and needs a break. She says he needs to show that he can be faithful and that their love is worth more to him than his ego.

KD removes one of the cuffs and cuffs him to the leg of the table, then storms out.

Karlie meets up with Joseline to get deets on the situation with Jessica Dime.

Karlie recounts the story of her conversation with Jessica.

She tells Karlie that she wants her to tell Jessica to meet with her at the studio so she can talk to her herself.

Kalenna goes to Tony’s club in the day to talk to him. She says she wants him to sign a release form so she can go with with Deb as her new manager. He agrees to sign it, and she rips it away, asking in disbelief if he was really going to sign it. He says he doesn’t want to play games. She says he is taking time with all these other people. He says he spends time with those other people because they listen and are manageable. She says she had his baby, asking if that’s not manageable enough. He says she is mixing business and the personal, and she says their business is personal. She angrily shoves the paperwork away when he gives it to her, and he tells her that she is bothering him at work. She storms out, screaming that he isn’t a club owner, he does music.

Jessica Dime shows up to Joseline’s studio while she is working on a new track.