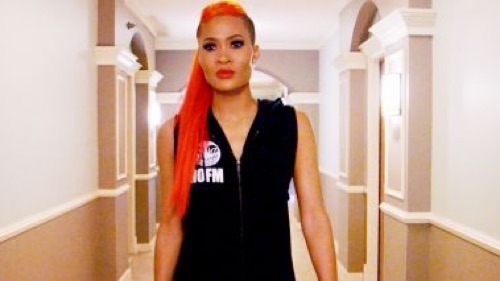 Tonight on VH1 their series Love & Hip Hop Atlanta continues with an all new Monday June 22, season 4 episode 9 called “I Deserve” and we have your weekly recap below. On tonight’s episode, Mimi Faust comes clean to Ariane; Joseline Hernandez  and Stevie perform at the opening of Tony and Kalenna’s club.

On the last episode, Margeaux and Nikko took issue with Mimi’s sex tape saga; Joc tried to make nice with Khadiyah; and Joseline learned that Stevie had been working with other artists. Did you watch last week’s episode? We did and we recapped it right here for you.

On tonight’s episode as per the VH1 synopsis, “Mimi comes clean to Ariane; Joseline and Stevie perform at the opening of Tony and Kalenna’s club; Margeaux drops a bombshell on Nikko; Khadiyah has news for Yung Joc; and Momma Dee gets the surprise of her life.”

Well, we all saw it coming, but when Mimi finally came clean about leaking the sex tape it was a revelation nonetheless.

Mimi has always said that she was smart, that she was smart enough never to be fooled or used by any man. Yet, no one knew how naïve/unthinking she could be when it came to Nico. And so right now her latest story is just not making any sense.

Mimi said that Nico talked her into doing and then releasing the sex tape. And, if you just happen to have forgotten, this sounds very familiar to when she claimed Nico “convinced” her into signing a book deal. So either Mimi can’t think for herself or she knew exactly what she was doing with Nico this whole time.

Because, really, he can’t have been that good!

And this whole coming clean business is not a concession on her part because Mimi has not seen the light. In fact, she’s only doing all of this in order to prevent Nico from exposing her. If he and his wife hadn’t threaten her then she would have kept on playing up her victim role. Frankly, people can get tired of that really fast.

Just ask Yung Joc. Joc and his latest have had yet another fight but, since she’s kicked him out, he’s been staying at Sina’s place. And she would like an explanation for that sit-down he had arranged with Khadiyah.

Sina knew that it was going to be a bad idea but somehow let Joc talk her into doing it. But now that the sit-down has failed and Joc realizes that he can no longer bring his former side chick around Sinna anymore, Sinna would like to know whether or not “Miss Piggy” is finally gone from the picture. Sadly, Joc doesn’t have an answer for her.

He wants to wait and see what Khadiyah will do. Will she take him back? Will she finally cut the strings?

Who knows, but in the meantime it looks someone is soon going to be happy. Earlier Ernest had approached Scrappy to ask for the younger man’s blessing. It seems he wants to renew his vows with Momma Dee and so he wanted to check-in with Scrappy first. But, thankfully, it appears that he was worrying over nothing. Scrappy said he wanted his mom to be happy and, though he admitted to secretly hoping for a long engagement, he’s also happy about Momma Dee now having a new distraction in her life.

In his own words, “She’s Ernest’s problem now”.

Luckily, Scrappy’s enthusiasm didn’t deter Ernest and later he proposed to her in the one place he knew would be special. He popped the question

And Momma Dee was just so excited that not only did she say yes but she also sang a little bit for him as well.

However, while those two are on their way to marital bliss, Tony and Kalenna have hit a major bump in the road. And honestly Tony might have brought this on himself. See he came home at 10 in the morning after he had been out all night. So later his wife questioned him about what he was doing. And he claimed to be working yet he couldn’t get into specifics when asked.

But then he said something and she said something. Later, at the opening of their club, they couldn’t stand to be near each other. Neither of them knew what to do to move on and Kalenna ended up turning to Rasheeda to lean on.

And Rasheeda was a good person for this. She listened and then she advised. She told Kalenna that maybe she and her husband should go to Deb to work out their management issues. Hopefully with business out of the way – the two can then begin working on repairing their marriage.

If they don’t then they might turn out like Nico and Margeaux. Now those two tried the open marriage thing but ultimately it couldn’t change the fact that they had grown apart. So Margeaux chose to be brave and call it quits.

She’ll always love Nico; however, she’s no longer in love with him. And the difference between the two is what made her end things.

Mimi had finally confessed and only Margeaux had constantly defended her husband. So no one can say that Margeaux didn’t try. She did but none of it seemed to work this time. And now Margeaux wants to be happy.

Though, her little feud with Mimi doesn’t look like it will soon blow over. And that also goes for when her divorce comes through.

Ariane is a friends with both women but, really, she’s not a miracle worker.