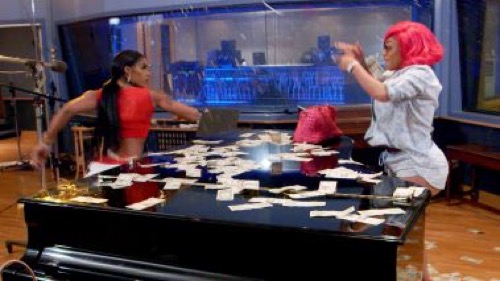 Tonight on VH1 their series Love & Hip Hop Atlanta continues with an all new Monday July 6, season 4 episode 11 called “On the Road” and we have your weekly recap below. On tonight’s episode, Joseline Hernandez and Stevie J travel to L.A. on business; Jessica Dime and Margueax Simms show off their skills at an open mic night.

On the last episode, Yung Joc wanted to make up with Khadiyah; Kalenna looks for a new manager; and Jessica Dime had a showdown with her old friend Joseline. Did you watch last week’s episode?  We did and we recapped it right here for you.

On tonight’s episode as per the VH1 synopsis, “Joseline and Stevie travel to L.A. on business; Jessica Dime and Margueax show off their skills at an open mic night; Mimi and Dawn fight over MF Management; and Rasheeda thinks that Kirk is cheating on her.”

Jessica says she’s hit up Joseline a few times since she’s been in Atlanta since they usually always hang out.

“You pay me,” Jessica says, and Joseline starts throwing dollars bills all over the room. Jessica throws some of them back at her and then Joseline throws her drink at Jessica. The women have to be separated as they lunge at her. Security escorts Jessica out of the building.

Ashley Nicole is having her show, and she’s nervous because she’s asked Rasheeda to see her perform after Rasheeda got mad at her for disrespecting her.

At the venue, Rasheeda friend asks her if she is sure Kirk and Ashley are just friends, and she says Kirk did say that but also people don’t just come at you sideways for no reason, referring to Ashley’s behavior at the auction.
Ashley comes out and starts singing, and Rasheeda and her friend almost immediately see that Ashley is lip synching.

Ashley comes up to them after the performance, asking them what they thought. Rasheeda tells her to hold the mic up to her mouth when she isn’t actually singing live, to make people think that she isn’t. She and her friend also critique her black lace outfit. Ashley says that Kirk actually helped him pick out the outfit, and that’s why she needs female input. Ashley makes a reference to “messing around” with Rasheeda’s husband.

Ashley says she doesn’t want any problems, so she’s coming to her as humble as she can. She says they are going on another promo tour, and that they’re going to “be a family” and “be one.”

Joseline goes and picks up Stevie, immediately telling him about the fight with Jessica in the studio.
He says that Puffy called him back and wants to make him a song. He also says some hedge fund investors want them to do a movie, which he would executive produce and the two of them would star in. It’s a romantic comedy called ‘That Time of the Month.’

Rasheeda says in confessional that she’s sick of hearing shit from Ashley about what he’s going to be doing. She confronts him, calling him “Mr. Promo” and he says they came up with the idea just before the show and he didn’t have time to tell her. Rasheeda says the promo tour needs to be canceled because he doesn’t have a good track record. He says it’s just business, and she says she hopes it is because the last thing she needs is him making her look crazy.

Jessica says in confessional that Mimi has not done anything for her career in the last three months except setting up her disastrous meeting with Jazze Pha.

She is going to sing at an open mic and invites Karlie. Margeaux also comes.

Karlie says they should meet because they both have a common denominator, which is Mimi. Jessica says she has been working with her and is hasn’t been going well. She says she agreed to work with her for a certain period of time, and when that’s over, she’s going to be done.

Karlie asks Jessica what happened when she went to talk to Joseline, and she tells the two of them what happened. Jessica also talks about their trysts in the past.

After she performs, Jessica calls Margeaux on the stage to perform. Karlie is impressed with Margeaux’s performance and becomes interested in signing her to the new label she has started. Jessica also wants to collaborate with Margeaux. ‘And you’re both going to do it on my label,’ Karlie says.

Jessica reaches out to Mimi after being inspired at the open mic not to sit around and wait anymore. Jessica asks her what is up with the management because they haven’t been doing anything. Mimi says she has been doing some stuff behind the scenes and lining some things up, because she doesn’t want to tell her until everything is order.

Stevie and Joseline meet with the guys who are setting up their movie.

This is the first movie Stevie is directing and executive producing.

Joseline says in confessional that she likes to see Stevie taking care of business because he looks like the kind of man she wants to be with.

Rasheeda says in confessional that she is choosing to believe Kirk when it comes to the promo tour.
Erica has invited Rasheeda to talk while they look at the new property Rasheeda and Kirk are investing hundreds of thousands of dollars in.

Erica asks Rasheeda what Kirk is doing with the promo tour.

Erica says she knows Rasheeda wants to see the good in him, but she really wants her to stop and evaluate everything. Rasheeda asks if she should be worried, and Erica says definitely. Erica says she doesn’t want to put ideas into her head, but thinks she should stop and pay attention to everything he does. Erica says she has been in the same situation and Lil Scrappy turned out to be cheating on her. Rasheeda says that if something is going on, she will divorce Kirk.

Mimi has come to confront Dawn for trying to steal her business. She says that she had a meeting with Diamond, who told her she was trying to get her over on her team. Dawn says Jessica has been here for three months, and Mimi isn’t doing anything for her. She says she was the one who convinced Jessica to come to Atlanta, and Mimi asks why she didn’t manage her from the start then. Dawn tells her that she knows Jessica likes money, and if you aren’t making her money, she will throw you to the wayside. Mimi says when she is done with her three months with Jessica and she feels like she can make her a gazillion dollars, she can go do that. Dawn says everyone knows Mimi can’t do anything because she hasn’t been doing anything.

Rasheeda wants to believe that Kirk isn’t cheating on her again under the pretense of going on a promo tour.
She calls Kirk’s hotel room, hoping that Kirk is sleeping in the hotel room like he’s supposed to be. A giggling woman answers, saying “this is Ashley.”

Rasheeda gets in her ride and picks up Erica, and the two head to the hotel.

When they approach the door, they hear a woman giggling loudly. They knock.