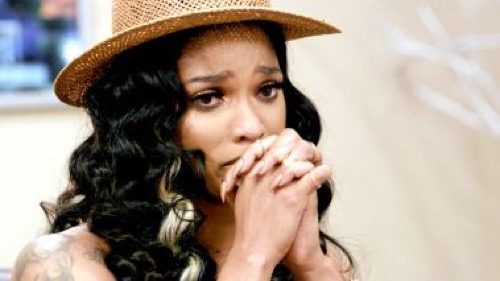 Tonight on VH1 their series Love & Hip Hop Atlanta continues with an all new Monday August 3, season 4 episode 16 called “Bait and Switch” and we have your weekly recap below. On tonight’s episode, Kirk Frost plans a big surprise for Rasheeda Frost; Lil Scrappy may abdicate the throne on the eve of Momma Dee’s wedding.

On the last episode, Joseline circumvented Stevie to record a hot new track; Momma Dee planned her dream wedding; and Margeaux and Jessica Dime bonded. Did you watch last week’s episode?  We did and we recapped it right here for you.

On tonight’s episode as per the VH1 synopsis, “Kirk plans a big surprise for Rasheeda; Scrappy may abdicate the throne on the eve of Momma Dee’s wedding; and Stevie takes the guys on a farewell fishing trip and also learns a secret about Joseline.”

Kirk blindfolds Rasheeda and takes her to a secret location to make up for everything he has done to her recently. He shows her the vacant store in a mall, where she can set up her dream business.

Jasmine tells Scrappy that Momma Dee wants both Bambi and Erica to be bridesmaids at her wedding. She tells him that he needs to talk to his mother about her upcoming wedding, saying it’s not going to work out this time because it didn’t work out the last time.

Joseline continues to take her career in her own hands, meeting with gay promoters who want her to perform at an event for The Trevor Project. She tells them about her support for the gay community as a bisexual and her family judging her for her sexuality. She breaks down in tears talking about her struggles.

Kalenna and Tony to go counseling to talk about her postpartum depression.

Scrappy confronts his mom on getting remarried and having Erica in her wedding. Momma Dee says Erica is his child’s mother, and he says she is still not family.  Scrappy says they aren’t going because they weren’t invited the first time. She says she needs both of her kids there and needs him to walk her down the aisle because she didn’t have a father like his daughter does. He says if Erica is there, he won’t be in the wedding or the parking lot.

Jessica Dime and Margeaux work on Margeaux’s song “Start a War” in the studio. Jessica tells Margeaux about how Tiffany Foxx revealed that Mimi has been talking shit about her as well as the fact that Foxx is already working with Stevie, whom Mimi promised she would be able to work with. She says she is going to drop Mimi, but not before she does a performance that Mimi set up for her. She invites Margeaux to perform with her as a special guest.

Margeaux says in confessional that she is going to take sweet satisfaction by ruining Mimi’s booking with a performance by her.

Stevie J takes the guys fishing to let them know he’s moving to Los Angeles to work on movies and music.

Scrappy tells them that his mom is getting married to Ernest and wants Erica to be a bridesmaid. They tell him that Erica is the mother of his child and therefore is family.

Kirk tells them that he found Rasheeda a store.

Tony reveals that Kalenna is suffering from postpartum depression. He says they saw a doctor and everything is going well.

Stevie J talks about Joseline working with other people behind his back. Tony tells him about the Gayborhood event that Joseline will be performing at. Looking at a photo of the people she’s working with, he sees one of his contacts. (Joseline had told him that she didn’t use any of his contacts in finding her own work.)

Rasheeda tells Erica about Kirk giving her a new store. Erica tells Rasheeda about Momma Dee wanting her to be her bridesmaid, and Rasheeda laughs. She tells her about Bambi wanting to provide hair for the wedding.

Joseline comes into Stevie’s studio looking good, and he tells her that he knows about her performance and he thought she wasn’t using any of his connects. He says she wants to go backwards and work with people who aren’t even one percent of him. She says it’s about her taking care of business while he works with artists who are local. She says she doesn’t use his name and people want to work with her. She asks what she is supposed to do, if she is supposed to sit there and be a maid and not make music until Stevie J is ready. She says she performs and does music because of her husband. She says that all she wants to do is perform, and that she wants to do the Gayborhood performance which is for a great cause. She tells him she wants him to come and see what she has worked so hard for.

Momma Dee calls Erica and tells her they need to talk immediately. She says that Scrappy blew up when she said she was going to be one of her bridesmaids. Erica says they’ve had their differences and moved past it, so why can’t he get over it? Momma Dee says Bambi is in Scrappy’s ear. She tells Erica that Scrappy says he isn’t going to be at the wedding to walk her down the aisle if Erica is there. Erica says that she doesn’t have to be in her wedding if it’s going to cause drama.

She then says that Jasmine doesn’t want her to marry Ernest because of the lying and stealing he has done in the past. Erica asks her if she is over it, and she says yes. Erica asks why Jasmine can’t get over it then. Erica asks Momma Dee if she would move forward if the day came and her kids weren’t there. She says she honestly doesn’t know.

Karlie asks Jessica Dime how Mimi is going to feel about her working with Margeaux. Dime says it has nothing to do with Mimi, but Karlie doesn’t believe her. Dime says Mimi hasn’t been real with her. Karlie says she needs to tell Mimi, and Jessica says she will find out at her performance. She reveals that Margeaux will be performing “Start a War” with her. Karlie says she’s really going to start a war, and Dime says she is going to know because she’ll be dropping bombs with her verse.

Stevie J goes to Jessica Dime’s performance to be supportive. Mimi tells her that she is going to work with Jessica Dime until she says otherwise. Jessica Dime goes on stage and says she has a surprise for everyone, announcing Margeaux.