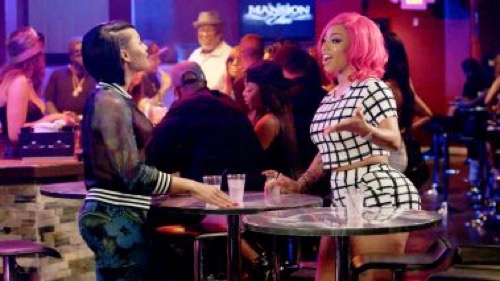 Tonight on VH1 their series Love & Hip Hop Atlanta continues with an all new Monday August 3, season 4 episode 15 called “Doing Me” and we have your weekly recap and spoilers below. On tonight’s episode, Joseline circumvents Stevie to record a hot new track; Momma Dee plans her dream wedding.

On the last episode, Margeaux faced off with Joseline and Stevie; Kirk and Tony attempted to negotiate a truce between Rasheeda and Kalenna; Bambi shot a steamy video; and Khadiyah squared off with Yung Joc. Did you watch last week’s episode?  We did and we recapped it right here for you.

On tonight’s episode as per the VH1 synopsis, “Joseline circumvents Stevie to record a hot new track; Momma Dee plans her dream wedding; and Margeaux and Jessica Dime bond.”

Tony holds Kalenna back as she calls Rasheeda a stupid bitch. He starts dragging her out of the restaurant, and Rasheeda says they can leave her purse there since there’s no money in it.

Outside, Kalenna cries as she asks Tony why he would make a comment about her having postpartum depression in front of Rasheeda. She makes him go back in and get her purse.

Momma Dee meets up with Erica to make up with her for the sake of her wedding. Erica tells her that she and Scrappy are on the same page and everything is going well. Momma Dee tells her that she is getting married and would like her to be in her wedding as one of her bridesmaids. She says she’ll have to think about it since that’s a bit much. Momma Dee says she wants her to be part of the process and help her find flowers and a gown.

Tiffany Foxx has invited Joseline to lunch to make sure no problems arise from her making a song with Stevie. Foxx tells her that she went through Mimi to get a ‘90s track made by Stevie. She tells Joseline they have already recorded the song in the studio and is ready to be mastered. Joseline says the thought it was a joke when she heard that he was working with this fake management company. Foxx says she decided to meet with her and that there hasn’t been anything flagrant or questionable. Joseline says she believes that because Stevie doesn’t have to go find women as she brings the treats every week, bringing up Jessica Dime. She tells Foxx that Stevie didn’t want to have sex with Dime because she was too fat. Foxx says she’s glad they’re on the same page and she doesn’t have to be a third wheel.

Nikko meets with his mom to tell her about his and Margeaux’s situation. He tells her Margeaux is going to pop in and they have some things they want to talk to her about.

Margeaux says they shouldn’t talk about being embarrassing in front of anyone’s mother since nothing was more embarrassing than her mom finding out about his sex tape.

She says she knows something is chemically unstable and she doesn’t want to get out of bed. Karlie says she has been through the same thing and it is nothing to be jokey about. Kalenna says Tony wants her to go to the doctor and she is going to go.

Scrappy is mad about Bambi being a video vixen in someone else’s video.

They meet up and she apologizes. She says she let her feelings get the best of her, but it was just a video. “That we know about,” he says.

He asks her where her key to his house is, and she says she has it and she’s going to use it.

She says in confessional that he really wants her to move into his house, but she likes having a place to go to to be by herself. But she says she likes the idea of being able to pop up whenever she wants and make herself at home.

Joseline records her new song “Church” in the studio, which she says in confessional is one of her hottest tracks yet. She also says she’s going to go what she’s going to do and doesn’t need any man to help her.

She calls Mimi to come to the studio and she wonders who all the people surrounding her are. She notices that Stevie is not there even though Joseline has never made any music without him.

Margeaux says in confessional that telling Nikko’s mom that they’re getting divorced is her first step to being free. She meets up with Jessica Dime to talk about collaborating on music.

Jessica tells her she hasn’t been getting anything done with Mimi. She says Mimi got her a meeting with Jermaine Dupro, who hooked her up with a junior producer. She says she still hasn’t met with Stevie. She says it would have been a good look for Mimi to get her work with him.

Margeaux tells Jessica about the photo shoot that Stevie set up to trick her. Margeaux asks Dime to be on her song “Start a War” and she says yes.

Mama Dee brings Bambi, Erica and Jasmine to the dress shop to ask them to be her bridesmaids. She asks them all to get together for her special day and support her.

Bambi says she will provide hair for all of the bridesmaids. Erica says no thanks because she has classics. Bambi says it’s for people who want to shimmer and not look dusty. As the two continue to insult eachother, Mama Dee says this is not about them and is about her special day. She asks Jasmine if she is going to participate in her wedding.

Jasmine says she doesn’t want her to go down the old road she did before. Mama Dee asks her not to make a spectacle of her day, saying she needs her.

Joseline traps Stevie with a romantic night and then asks him why they haven’t been spending time together. He reluctantly reveals that he was working on the studio with Foxx. Joseline reveals that she already met with Foxx and that she doesn’t like him working with people without telling her. She asks him if Foxx is even paying him, and he says he’s getting paid. He asks her why she is meeting with people behind his back.She says she can do whatever she wants to do, obviously.

Joseline tells him that she took it upon herself to go and make a song. She says she worked with some very talented people and that she felt he was doing his own thing.

He says he hopes she wasn’t using any of his plugs. She says he thinks everyone is his plug and he says the music industry is his. He asks her if she wants to do shows and videos on her own now. He says the problem is that that isn’t in her contract. He says he sacrificed three and a half years to get her where she is and she’s running behind his back. He asks who she did the song with, and she says she doesn’t know them. He tells her that she is going to miss him before storming out.

Jessica Dime is in the club with Dawn and updating her on her dealings with Mimi, when she spots Tiffany Foxx, whom she hasn’t seen since their fight in the studio. She decides she needs to go over and talk to her.

Jessica goes up to the table where Foxx is talking to an artists and coughs to get her attention. Foxx asks if they’re going to do this again, and she says yes. Foxx says that when they fought in the studio, Dime started a fight for no reason. Dime says that she was trying to talk but Foxx was interrupting her.

Foxx says that Mimi is telling her that Stevie and Jazze Pha are telling her they don’t want to work with her. Dime says in confessional that she is taken aback by the fact that not only is Foxx working with the people she is supposed to be working with, but Mimi is talking shit about her behind her back to other artists.

Foxx says something about putting her out of a hotel room when Jessica Dime hurls a water across the room at her and the two are separated, screaming insults at eachother.

Outside of the club, Dime tells Dawn she is done with Mimi and will rip her contract up right in her face. Dawn gives Dime a hunk of booking money. “Let’s get this money,” she says.