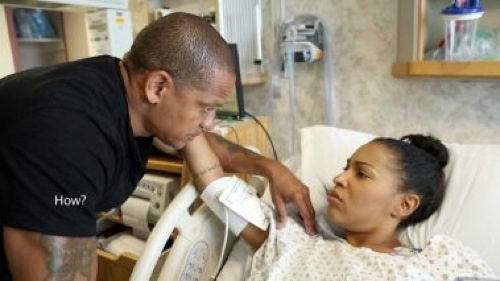 Tonight on VH1 their series Love & Hip Hop continues with an all new Monday January 19, season 5 episode 5 called “Oh Baby!” and we have your weekly recap below. On tonight’s episode, after reconnecting with Rich Dollaz, Erica Jean learns he has a client she does not approve of.

On the last episode, when Cyn dug into the business dealings, his relationship with Erica suffered. Did you watch the last episode? If you missed it, we have a full and detailed recap right here for you.

On tonight’s episode as per the VH1 synopsis, “Erica and Rich reconnect, but she doesn’t approve of his new client. Meanwhile, Cisco tries to overcome past issues with his baby mama, Chrissy wants to have a baby, and Amina goes into labor.”

Cyn and Chrissy meet up. Cyn tells Chrissy that she is done with Erica. Chrissy tells her that she can’t be seen with someone like Erica, whom no one respects because she screws everyone over.

Chrissy suggests she work with Rich. She says in confessional she can’t wait to see the look on Erica’s face when she sees both of her exes working together.

Peter gets back from Barbados just in time for the birth of his daughters. He says he can’t wait for his daughter to be born and is going to be honest from this day forward.

He tells Amina that he talked to Tara, and Amina asks him who he was with in Barbados. When she asks whom he was with, he doesn’t answer, telling him he talked to Tara on the phone. He confesses that he told Tara they could work things out and she said no. “I chose us,” he says. Amina starts crying, saying he chose her because Tara said no. He says if he chose her, he wouldn’t be there. He tells her he had to have closure for everything.

Erica tells him she is dropping her lawsuit, and letting him keep the money.  Rich says in confessional that of course she’s dropping her fake lawsuit, because she can’t sue for money she never made.

Chrissy and Chink meet at the park. She apologizes for causing a scene in the studio. She brings up the fact that he’s in DC all the time, where her ex is. He says he is only technically married, but in a relationship with her. She says it’s only logical for her to wonder if he’s messing with her. He says it will work itself out as it works itself out, and he doesn’t want to talk about it anymore.

She then says she really wants to start a family. He says he doesn’t know and has to process the idea of having a child.

Yandy tells Candy she’s pregnant. Candy brings up his court case, saying she needs to be prepared how to respond if things happen. Yandy says there is a dark cloud over them, but they don’t think about it. Candy says she should talk to him so they both know that no matter what, they have a plan.

Cisco meets Rich at the gym for advice. He tells Rich about the party, and how he told Diamond about her son, at which point she started disrespecting Tasha. Cisco tells Rich about how Tasha took his belongings and their kids, not answering his calls for weeks. Rich asks Cisco if he still loves her, and he says he always will. He says he needs to meet up with her to talk to her in order to get forgiveness or clarity in order to move forward.

Chrissy went to the doctor and found out she has a condition that will make it more difficult for her to get pregnant, so her biological clock is ticking.

Yandy and Mendeecees go to dinner to talk about his court case. He says he doesn’t mind talking about it, but he doesn’t want to talk negatively about it because he thinks of the worst case scenario only to find out it’s not going to be that bad. Yandy says that even if the worst does happen, she will be okay. She says she’s going to plan a wedding and pray that it goes the way it’s planned, but she will not get married in a jail.

Rich is surprised that Cyn has invited him out to talk. He apologizes for his drunken outburst, and Cyn is excited to be clearing the air with him. She tells him about her talk with Chrissy when she suggested they work on a song together.

Chrissy tells Chink that she went off the pill three weeks ago. He asks where he thinks her not telling him about that puts them after they were building up trust in their relationship.She says if he weren’t married, the two of them would already be married and starting a family. He says he may stay married forever, not even to be with his wife. Chrissy is crying, saying she doesn’t want to be with anyone but him, and he asks her what he is supposed to do. He says she’s thrown out everything that they had been doing.

Cisco meets up with Tasha to talk. She says that his words and actions contradict eachother, and that she abandoned him after he abandoned her. She says she knows him so well and loves him, but she just doesn’t trust him. She asks him if he’s moved on, and he says he hasn’t, but he has been seeing someone. She says she feels like choking him right now. He comes clean about how they conceived a child while he was with Diamond. She says he should just sever the ties between them so she can go find her happy ending. He gets angry, daring her to bring someone around their kids. He storms out.

Rich tells Erica that Cyn came to him about working on music together for charity. He says in exchange for the music he needed someone to work on his liquor campaign. She asks why he had to choose her of all people, saying he never should have offered Cyn that over her. She tells him they are not friends.