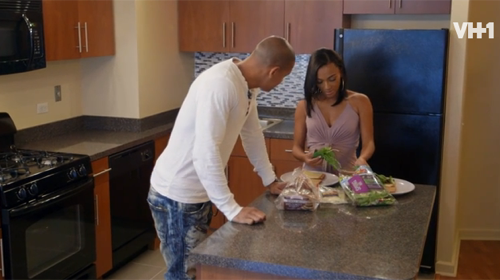 Tonight on VH1 their series Love & Hip Hop continues with an all new Monday December 21, season 6 episode 2 called “Secrets and Lies” and we have your weekly recap below. On tonight’s episode, Rich Dollaz welcomes a new lady into his home; Rah Ali and Yandy Smith face difficulties with their artists; and Papoose warns Remy Ma about her wedding planner.

On tonight’s episode as per the VH1 synopsis, “Rich Dollaz welcomes a new lady into his home; Rah Ali and Yandy face difficulties with their artists; and Papoose warns Remy Ma about her wedding planner. Elsewhere, Amina confronts Tara about Peter’s whereabouts, leading to an unlikely family reunion.”

Cardi B was yet another new face on tonight’s episode of “Love & Hip Hop” and, as it turns, the newbie already knows how crazy she is. And she likes herself just the way she is.

However DJ Self tends to have a problem with her high social media presence. On one hand, he was fine with her promoting herself as a brand seeing as he’s helping her establish herself as a genuine artist but on another hand he doesn’t want to find himself in her videos. He says he wants to keep the other side to their relationship, the less business side, on the low key.

And Cardi was fine with that. She wasn’t exactly looking for a commitment with Self because she is in a relationship albeit with a man in jail. Yet Cardi wants there to be nothing but complete honesty between her and Self. So if they can’t be seen together at a strip club then she would like to know why. Was he seeing someone? And if so why try to hide it?

Elsewhere, though, Rah Ali had to deal with her “clients”. Rah had recently become a manager and she had taken on the rap duo B.B.O.D. And in the short amount of time that she had been working for them, she had arranged a showcase.

But for some reason, Moe out of Moe and Lexxy had pretty much ruined her reputation at the one showcase that Rah managed to put together. So later Rah asked the girls to meet her and she tried to talk to Moe about her temper. For it was Moe that first approached Bianca and the two had made a scene that did nothing for their careers.

Only Moe didn’t like to being taken to task. She felt she was justified in getting into another woman’s face and so she told Rah that Rah works for them. And that all their manager should be worried about is the next step in their careers.

And therefore Rah turned to Lexxy. She told Lexxy that the reason the group kept going through so many managers was because of Moe. So she advised Lexxy to drop her partner and just Beyoncé her way into a solo career.

Yandy also had to have a talk with her artist. And she warned Young B about what would happen if no one else wanted to book her. So you know what Bianca did? She apologized to her manager and promised to clean up her act.

Which is what you’re supposed to say to the person in charge of your career.

In the meantime, though, being in back in New York has been good for Rich. He came back from California wanting to put things into perspective so he invited his teenage daughter Ashley to New York to say for a few weeks. Although Rich seemed to be a little lost about what to do with his daughter.

And she answered “no”. Rich’s sixteen year old daughter had lost her virginity and Rich has freaked out a bit. He had just promised not to drink as a house rule but he needed a drink after hearing what he did from Ashley. So he had a talk with her about safety afterwards and then he told Ashley’s mother Miracle about what he had heard.

Though Miracle had a surprise of her own. Miracle had told Rich that she wanted to spread God’s word on a mission that would last two years. Therefore she wanted Rich to keep Ashley, not for weeks, but for the two years. Which wasn’t something he had signed up for.

But he agreed to do it and then didn’t feel so bad when he had to tell Miracle about their daughter. And naturally she freaked out. She had wanted to lock her daughter away so that the girl could be safe from disease or pregnancy.

And Rich had to be the voice of reason.

Rich told her that their daughter was a responsible and that he would watch over Ashley. Because technically she had lost her virginity on her mother’s watch.

However Ashley wasn’t a bad kid but Remy Ma’s stepdaughter on the other hand was running out of excuses over why she kept getting into fights. So Remy had to speak with her and when that didn’t seem to work – Remy and Pap had to sit down their kids.

They didn’t want the kids to continue getting into fights or trying to talk back to them. And thus they said the one thing that every parent has to use. Do as I say not as I do.

So the parents were hoping that would work while they focused on their dream wedding. That Rah is now helping them to plan.

But the craziest thing happened on tonight’s episode. Tara invited Amina and Peter to her apartment and then she called for an honest discussion between all of them. Peter had to admit to Tara what he was doing with Amina and he had to do the same with Amina about what he was doing with Tara. And despite a lot of yelling. None of them were finished with each other and so the next episode is going to be really interesting.