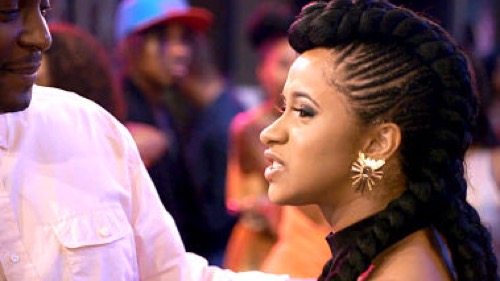 Tonight on VH1 their series Love & Hip Hop continues with an all new Monday December 28, season 6 episode 3 and we have your weekly recap below. On tonight’s episode, Cardi B and Yorm lose their minds fighting on national TV for nothing at all.

On the last episode, Rich Dollaz welcomed a new lady into his home; Rah Ali and Yandy faced difficulties with their artists; and Papoose warned Remy Ma about her wedding planner. Elsewhere, Amina confronted Tara about Peter’s whereabouts, leading to an unlikely family reunion. Did you watch the last episode? If you missed it, we have a full and detailed recap right here for you.

On tonight’s episode as per the VH1 synopsis, “Cardi attends Mariah’s birthday party. But what’s interesting was learning that her boyfriend Self was also at the party with his other girlfriend Yorma. All hell breaks loose after Cardi spots Self and Yorma getting cozy in the corner.”

It sounds like the 6th season Love & Hip Hop will be packed full of can’t miss drama that you won’t want miss and neither do I. Don’t forget to check CDL for our live recap of Love & Hip Hop tonight at 8PM! Are you enjoying Love & Hip Hop? What kind of drama do you think is going to unfold during the season 6 episode 3 of Love & Hip Hop? Sound off in the comments and let us know!

Amina left Tara’s apartment with some infamous words on tonight’s episode of “Love & Hip Hop”. Apparently Amina is pregnant again and, though she says she’s done with Peter this time, a second pregnancy might just change that.

And last week, DJ Self had told his main lady that there wasn’t anyone else in his life. Which was a lie but one Yorma ultimately chose to believe. So Self wanted to do something to reassure her about their relationship and he thought the best possible way to do was for them to final go public. He was going to take her out and even introduce her around as his girlfriend.

However Yorma wasn’t the only woman in his life and, as it turns out, he’s been juggling quite a few women. There’s Mariahlynn, well, there was Mariahlynn but they now have more of a professional relationship. So that’s why it wasn’t such a big deal when Mariahlynn and Cardi B finally met.

Cardi B is another woman in Self’s life and unfortunately she had been invited to the same party (Mariahlynn’s birthday party) that Self wanted to take Yorma. Therefore Seld tried to fast talk Cardi out of coming to the party but she must have seen right through him because she realized he was up to something. And hadn’t liked it.

So Self played with fire and it’s not a surprise that he got later burnt.

Although if we’re going to speak of rash decisions then Yandy’s meeting with Miss Moe Money has to be brought up. Moe had gotten a huge fight last with Rah who was also acting her manager. And it seems that Rah had pushed a certain button because now Moe wants to dump her.

Rah was supposed to be managing B.B.O.D and in the short time that she was doing so – she did get them a coveted showcase. However that wasn’t enough for Moe. She wanted more than that and she didn’t want to be reprimanded for her actions at said showcase. In which she walked over to rival’s table and got into a huge argument in front of people that she was supposed to impress.

And so Rah wanted Moe to work on her attitude problem. Especially as there was a second option that Rah considered to be more viable. She had told Moe’s partner Sexxy Lexxy that maybe she should go solo and Moe did nothing to refute that.

But she did go see Yandy by herself. Moe asked Yandy about B.B.O.D’s representation and Yandy agreed with her about Rah. In their eyes, Rah was just starting out and what that meant to them was that she didn’t have much pull or experience in the business.

So Moe felt vindicated by what she heard and she later threw her meeting with Yandy in Rah’s face when they were supposed to be going over a release party. Although once she found out that her group was seeing another manager behind her back to discuss her, the release party was suddenly off the table. And Rah informed them that she will no longer be representing them in the future.

Rah had called Moe “disloyal” and she felt it was particularly insulting that they would turn to Yandy. Who she personally felt was a bit rusty in the business. Though Yandy had done some of her own laughing earlier at Rah’s expense so it was only fair that they both had low opinion of each other to begin with. And thankfully this situation with BBOD hadn’t actually affected something like a friendship.

But Yandy and Mendeecees did go out with Remy and Papoose. The couple had wanted to talk about Mendeecees’s upcoming prison sentence and how hard it was on Remy and Papoose when she went away. And the entire discussion helped put things into perspective for Yandy.

She had wanted Mendeecees to live in the moment but hearing about Remy helped her realize how hard it’s been on Mendeecees knowing that he’ll be missing years out of his kids’ lives. He had gone away once before and that one year had been tough. So it’s bound to be a lot worse for him after he’ll be gone for eight years.

He doesn’t want his kids to think he abandoned them and it’s been hard to try to prepare them. He spoke with his eldest and he did his best to tell his son that he wasn’t leaving for good but their relationship was about. And only time will tell how it’ll be for them when he comes out.

So Yandy and Mendeecees were spending all the time they had left with their family. And they weren’t going out to any parties that Rich happened to be hosting. Though the party through for Mariahlynn was notable.

Yorma and Cardi finally met in person and it wasn’t long before the two women started to take swings at each other.