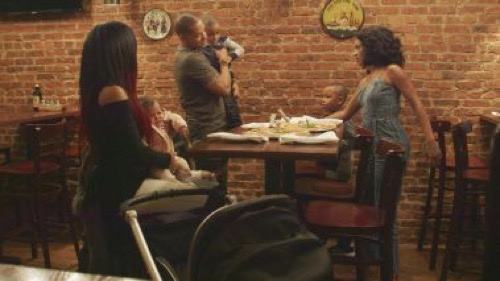 Tonight on VH1 their new series Love & Hip Hop continues with an all new Monday February 9, season 5 episode 8 called “Worlds Collide,” and we have your weekly recap below. On tonight’s episode, extended-family problems plague Yandy Smith and Mendeecees Harris. Meanwhile, Cisco Rosado focuses on his relationship with his children’s mother.

On the last episode, Peter tried to assure Amina that his relationship with Tara was over. Meanwhile, Rich worked with a new artist; Cisco and Diamond met; and Mendeecees tried to make amends with Samantha. Did you watch the last episode? If you missed it, we have a full and detailed recap right here for you.

On tonight’s episode as per the VH1 synopsis, “extended-family problems plague Yandy and Mendeecees. Meanwhile, Cisco focuses on his relationship with his children’s mother; Peter brings the family together; and Erica opens up about a new love.”

It’s all about repercussions on tonight’s all new episode of “Love & Hip Hop”. And funnily enough it’s the guys this time that trying to fix everything.

Mendeecees’s issues with his baby mama went from on minor issue to a full blown fight when his mother attempted to get physical with the other woman at what intended to be a peaceful sit-down. So, although Mendeecees doesn’t want to drag Yandy into his mess, he still turned to her in his hour of need and now she’s the one calling the shots. Albeit behind the scenes.

She reached out to Kim, Samantha’s mother, and she tried to convince Kim that young Mendeecees should spend his time split evenly between his mother and father. However Kim was more concerned about her ruined suit Mendeecees’s mother had thrown her drink on than she was about reaching a compromise. So, in spite of everyone’s best effort, this court issue might ended up getting dragged through the courts.

And, in the meantime, Mendeecees did his best to cool down and basically get away from all the tension by hanging out with his friends.

He, Rich, Cisco, and Chink planned on hanging out and they soon found themselves talking everything out in a strip club. And, regardless of how that sounds, the guys did get vent a few things.

Subsequently, Rich has gotten himself involved with yet another crazy girl and Chink realized he wanted to fight for Chrissy. Chrissy, as it turns out, was ready to have kids and Chink wasn’t. So the two of them got into a fight about it and it wasn’t until they were giving each some space that it finally dawned on Chink that he loved Chrissy enough to compromise. Now, that doesn’t mean he’s ready to have kids with her, but he does know he could give her more than what he already has.

So, meeting up with their friends, did the guys some good. And later Chink promised Chrissy he would think about having kids. It seems he loves her enough to try and meet his demands.

As for Peter, who wasn’t at the club with the guys, he finally arranged a meeting between Amina and his boys. Yet, instead of acknowledging her role in his life, he thought if he just introduced her as daughter’s mother then everything would be fine. And it wasn’t. Because what Peter didn’t understand is that Amina is also his wife and the boys’ stepmother. So she’s tired of feeling like an outsider.

Peter may have thought he was trying to mend things but all he did was point out a major flaw – he doesn’t respect her position in their marriage.

Everyone could see that Peter doesn’t treat his wife as she should be treated. And, after Amina met the boys, she and Erica Mena had talked about the meeting.

Erica told Amina that a few things at least did come out of sitting down with Tara and the boys. And she explained it to her friend like this, as long as Amina remains on speaking terms with Tara then Peter won’t be able to lie to the both of them anymore. Meaning Peter might actually be forced to sticking to one woman at a time.

Prior to all of them trying to play nice, Peter was able to manipulate the ladies into giving him everything he wanted. If he wanted to sleep with Tara one day and Amina the next – the ladies were completely unaware of what was going. Until, you know, one of them eventually spill the beans (probably to hurt the other).

But with their relationship changing – Peter won’t be able to take anymore secret vacations without his wife’s knowledge.

And, even as Yandy tried to fix things between Judy and Kim, Yandy still had to work her own problems with her future mother-in-law. Because it looks like Judy thinks Yandy isn’t being loyal to her. According to Judy, Yandy is too focused on trying to appease Samantha and them when its her that should be Yandy’s biggest concern.

So what does Yandy do? She still finds a way to get Kim and Judy to speak. And she brokered some sort of peace that could hopefully make it easier on everyone as they continued to discuss custody.

And as for Chink, he made a lot of promises to Chrissy but he might not be able to carry most of them out. You see his father is sick and Chink doesn’t want to upset him by officially separating from his wife. The same wife his whole family has come to adore.

Although Rich shoudl probably retire and lean to stay away from the crazy type. Because two women neraly busted up his studio and at this point in his life – he really should have moved away from all of that!