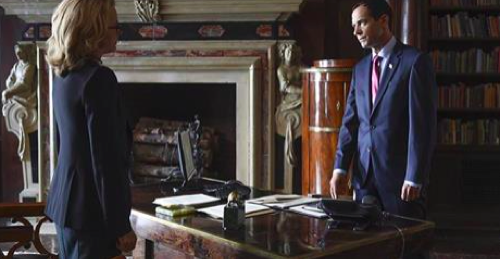 Tonight on CBS Madam Secretary airs with an all new Sunday October 18, season 2 episode 3 called, “The Rusalka.” and we have your weekly recap below. On tonight’s episode, Elizabeth (Téa Leoni) is met with hostility while trying to deal with the Russian government.

On the last episode, Elizabeth took advice from former Secretary of State Madeleine Albright and ignored President Dalton’s recommendation on how to negotiate the safe return of a Sate Department employee who was kidnapped in Afghanistan. Meanwhile, Henry was having trouble persuading a student to spy for the U.S. government. Did you watch the last episode? If you missed it, we have a full and detailed recap right here for you.

On tonight’s episode as per the CBS synopsis, “Elizabeth is met with hostility while trying to deal with the Russian government; at the same time, Dmitri is kidnapped and interrogated about being a Russian spy.”

Tonight’s episode of Madam Secretary kicks off in Moscow Russia – at the President Ostrov’s funeral. President Dalton calls and offers his condolences, he tells her that he is sending Secretary McCord to Russia ASAP. Meanwhile in the US, Elizabeth, Dalton, and Craig Sterling are bickering over what they should do next. Sterling wants to send troops in ASAP, before a civil war erupts. Elizabeth thinks that they should support Prime Minister Gorev – and try to get him in to the presidential opening because he will work with the United States.

Elizabeth, Sterling, and the President head to a meeting – they discuss the cyber hacking on Air Force One. They have been investigating the malware – and still have no answers about who was responsible for it. The tech inspector says that it is the most advanced software he has ever seen. Air Force One is still grounded, but Elizabeth’s plane will be ready for Russia.

Elizabeth heads home and is bombarded by her son Jason’s permission slip to try out for his high-school football team. She rants to Henry that it it dangerous, and she doesn’t want him getting permanently injured before he graduates high-school. Henry on the other hand thinks that it might be good for Jason to get involved in some sort of team sport, he agrees to talk to Jason and see what his sudden interest is in football.

Elizabeth heads to work the next day and meets with her team to brainstorm up some plans on how to deal with the sudden lack of President in Russia. She thinks they should convince the Ukranians to sign off on a vote for greater autonomy in the East. They think that it will make Gorev look good if he helps Russia end the war.

Mike Barnow rushes in to Elizabeth’s office – he says they need to talk about her “Craig Sterling problem” and it is urgent. He is worried about rumors that Craig is spreading about her – and saying that she is on the outs with the White House. According to Mike, Craig was planted in the White House to help get POTUS and Jackson get a foot in for the next election. He says Elizabeth needs to push back now, or else she is going to get totally “boxed out.”

Mike and Elizabeth’s meeting is interrupted by a phone call from Gorev, she shares the plan with him that she and her team came up with. Elizabeth wants Gorev to broker the deal and peace treaty between the US and the Ukraine. GOrev says that he is “moved by her concern,” promises to take in to consideration the treat and says that he will be in touch.

After a meeting with the President, Elizabeth corners Craig Sterling – she reminds him that they are on the same team, and they should have lunch sometime. Craig wans her that “making nice with Russia is dangerous” and it will come back to bite her, so they aren’t on the same team. Craig snarks that their nation needs a strong, clear strategy – and that is why the President brought him in, because he obviously doesn’t have faith in Elizabeth’s ability.

Henry heads to work at the War College, and Dmitri is shaken up by his President’s death. After class he takes Dmitri aside, but he is obviously still not happy about being recruited as a spy. Henry asks about Dmitri’s sister and confirms that she is in Stockholm for the clinical trial – he reminds Dmitri of their deal. Meanwhile, Elizabeth meets with Kiev to try and iron out the peace treaty deal she is working on with the Ukraines. He is not easily swayed, and rants about what the soviets did to his own grandparents. Kiev finally agrees, and shakes hands with Elizabeth.

Henry meets with his handlers and tells them that Dmitri is on board with them, but he is resentful – especially now that he is grieving over the loss of the President. Henry explains that he is concerned about Dmitri’s state of mind, he might not be up to gathering them any intel.

Elizabeth meets with Mrs. Ostrov in Russia and offers her condolences on behalf of the United States. She brought her entire team along with them, they squirm as they have to participate in the Russian funeral traditions and kiss the dead President on his forehead while he lays in his coffin. After the funeral – there is a meltdown. Apparently, Greg snapped a photo with someone wearing a Nazi shirt – he was set up by Russian operatives. Russia is furious with the United States now, because the photo is all over the media. Elizabeth tries to smooth the bad press over with Gorev, he is livid – he wants Elizabeth and her team to leave Russia ASAP. Elizabeth manages to salvage the deal, Gorev agrees to try to bring his generals to the peace treaty as long as she brings Ukraine.

Greg is devastated – Daisy is ranting to him about how badly he screwed up. She doesn’t understand why he was posing for pictures like he was a celebrity. Daisy is determined to figure out who in Russia set them up for the picture, Greg thinks that she should call the President’s cyber guy Oliver for help – since they were obviously flirting earlier.

After work Henry heads to the park with Jason to toss around the football – he reveals he wants to try out for the wide receiver position. Henry sits Jason down, and tries to talk to him about why he has decided to play football. Jason confesses that he is trying to make new friends, since he switched school – he hasn’t made any new friends and he is sort of a loner.

Back in Russia, Elizabeth gets word that GOrev came through – the meeting with the generals and the Ukraines is back on. Elizabeth rushes to the meeting to hash out the new peace treaty. Meanwhile, Dmitri is walking down the street late at night and is jumped by men in black ski masks and tossed in to a van. It was Henry’s handler that had Dmitri picked up, and Henry is not happy about it – he thinks that they are going too far. The woman in charge explains to Henry that they need to see where his loyalties lie.

In Russia, the President’s wife takes the podium at his funeral and gives a speech in another language – which is broadcasted on live cameras across the world. She rants that the United States is not their ally, the President didn’t even come and pay his respects, he sent Elizabeth McCord instead. She goes on to say that Elizabeth is like the dark creature from their folk tales, and she has been having secret meetings with Gorev and aspiring to take over Russia. Elizabeth stands up in the middle of the funeral and grumbles that she has “heard enough” and storms out with her team in tow.

Elizabeth heads back to the US – and she has to face the President and Conrad. Sterline butts in and says that since Elizabeth’s plan fell through, they should just arm the Ukranians and back them in the war against Russia. President Dalton agrees, they tried it Elizabeth’s way, now they are going to try it Sterling’s way. Afterwards, Elizabeth meet with Mike and tells him that he was right about Sterling – he is obviously out to get her.

Elizabeth heads home and she and Henry sit down and talk about their days. Jason returns home from football tryouts and announces that he made the team – he is going to be a linebacker. Elizabeth rants to Henry that if Jason gets one concusson, he is off the team. Elizabeth gets a call back to the office, they finally have some news on Air Force One – Oliver reveals that the hackers had FULL control of the place. They could have flown the plane straight in to the ocean if they wanted to, it was an obvious warning sign from someone – but they have no idea who.