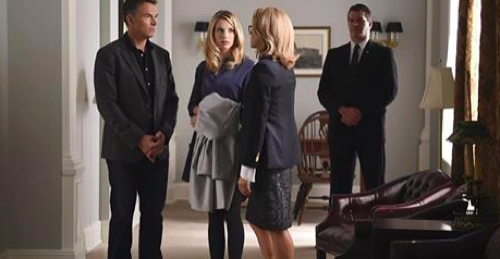 Tonight on CBS Madam Secretary airs with an all new Sunday October 25, season 2 Episode 4 called, “Waiting for Taleju.” and we have your weekly recap and spoilers below. On tonight’s episode, Elizabeth (Téa Leoni) finds herself pushed out of the president’s inner circle for disagreeing with his response to the growing tension with Russia.

On the last episode, Elizabeth was met with hostility while trying to deal with the Russian government; at the same time, Dmitri was kidnapped and interrogated about being a Russian spy. Did you watch the last episode? If you missed it, we have a full and detailed recap right here for you.

On tonight’s episode as per the CBS synopsis, “Elizabeth finds herself pushed out of the president’s inner circle for disagreeing with his response to the growing tension with Russia; at the same time, she and Henry try to protect Stevie from the media after incriminating photos of their daughter with Harrison surface.”

Tonight’s episode of “Madam Secretary” kicks off with Elizabeth and her family having breakfast and getting ready for the day. Elizabeth notices that someone from the White House is calling Stevies’ cell phone – she reassures her mom that it is just Harrison, and she isn’t takin his calls. While they have breakfast they bicker over which one of them has actually read Henry’s book on St. Francis.

At Elizabeth’s office, Daisy and Matt are having an awkward run-in. Daisy wants to move on – and it is nearly impossible when she is tripping over him at work. Nadine interrupts, Elizabeth and Maria Ostrov and their feud made the front page of all the papers, and the headline reads “Cat Fight!” Nadine rants that they are making it sound like a Real Housewives episode. She promises Elizabeth they will be taking care of it.

Elizabeth heads to her morning briefing with her team. Jay announces that the Polar Institute of China began construction on a weather station in the arctic to research climate change. If China tries to claim drilling rights or any new waters then the United States could lose out, Elizabeth tells him to draft a warning letter.

Elizabeth heads to the president’s office – he wants her to heard Craig’s new defense plans. Craig Sterling is not happy about the Chinese weather station in the Arctic, he says that by joining the Arctic Council, China and Russia could be working together to take down the United States. After Air Force One attack, everyone is on edge. Elizabeth heads back to her office and tells her team that they are going to have to shift their focus, and some of their programs are going to lose their budgets/ Jay thinks it is foolish to give up programs that create peace and order and spend all of their money spying on other countries.

Daisy has bad news for Elizabeth, she takes her aside and warns her that someone is trying to sell photos of Stevie and Harrison having sex to the tabloids. They sent a sample photo to all of the leading magazines, and the pictures are legit – the seller plans on handing over all of the pictures to the highest bidder. Elizabeth rushes to Russell’s office and tells him about the photos. Russell says that he was afraid that something like this could happen, apparently Harrison lost his phone last week. Meanwhile, Daisy and Elizabeth’s team is working hard trying to find the person selling the pictures. They think that the hackers that went after Air Force One could be responsible, and Daisy tells them to delete anything incriminating off from their electronics.

Elizabeth sits down with Stevie later that night. Stevie is freaking out, Harrison promised her that he would delete the pictures. She reassures her mom that they are just pictures, there isn’t a sex tape – and they were naked, but they weren’t actually doing anything – they were just lying in bed together after they had sex.

The next day at work, Daisy an Nadine have bad news – one of the photos of Stevie and Harisson were leaked on to the internet. They want to cancel Elizabeth’s meeting with the Royal Kumari of Nepal. Nadine explains that she is a virgin goddess and it is a religious contry. Elizabeth scoffs that they are not canceling the weekend, the Royal Kumari lives in a temple – she probably doesn’t go on the internet. Meanwhile, Henry is on a live news television discussing the moral beliefs on Christianity and Islam – a viewer calls in and mocks him and says that he is the last person that should be preaching about morals seeing as how there is a photo of his daughter floating around the internet in bed with the President’s son. Henry doesn’t exactly handle the call very well, and he winds up spewing off at the caller.

In the middle of the Stevie’s scandal – Nadine has more bad news for Elizabeth. Apparently the Senate flip-flopped and they didn’t pass the disaster relief bill that they had been pushing for Nepal. Elizabeth tries to cancel the meeting with the Kumari from Nepal, but it is too late, she is already at the White House. Elizabeth meets with the Kumari and explains to her that they don’t have the funds to help Nepal because the bill wasn’t passed, it doesn’t go over well.

After work, Elizabeth and Henry are invited to dinner with Conrad and the first lady to discuss the scandal. The President wants Stevie and Harrison to go on the news and pretend to be a couple so that it seems less scandalous. Elizabeth isn’t going to make her daughter go on national television and lie and say that she is in a relationship with a heroin addict, when she isn’t. Conrad starts bickering with Elizabeth, and their argument turns to Russia. Conrad it still upset over her “feud” with Maria Ostrov.

Elizabeth and Henry head home, Stevie tells them that she agreed to go on the news with Harrison. Stevie whines that the photo is ruining everything, at school they harassed her all day, and Henry lost it on TV because of her. She just wants to go on the news, lie and say that she loves Harrison so that it will all go away. Elizabeth heads to bed, and lays down with the budget proposal for defense – and she notices something suspicious. The next morning she rushes to track down the admiral, she wants to know why Craig spent half of the budget on tanks and heavy weaponry. The Admiral explains that in order to sell the proposal to the older “Brass” – Craig had to get big machinery because that is what “registers” with them. Afterwards, Elizabeth rushes to see the Kumari before she leaves town – she tells the 12 year old girl that she can save thousands of her people by approving the Himalayan agreement they are going to bring in front of her.

Elizabeth meets with Conrad, Russell, and Craig – she says that she saw an opportunity where they could propose an observatory in the Himalayas right next to Nepal. And, it is a strategic location, it’s right on the border with China. The prime minister of Nepal is open to the idea, as long as they pay a fee for the use of the land – which is ironically the same amount of money they were going to give them in aid.

Afterwards, Henry and Elizbeth meet with Conrad. He says that they got a hold of the guy selling the photos, he is a disgruntled former CIA agent. They have him in for questioning right now, and they have contained the photos of Stevie and Harisson.

Later that afternoon, Stevie requests a meeting with the former officer – his name is Ronald Watson. Her parents let her sit down with him, he reveals that he was fined and charged with a misedemeanor. He apologizes and says that he never met to hurt her. Stevie doesn’t care, he doesn’t realize the damage that he did to her. Ronald reveals that he wasn’t thinking clearly, he was fired for something he didn’t do. They wind up leaving on good terms, and Stevie heads home with her parents.