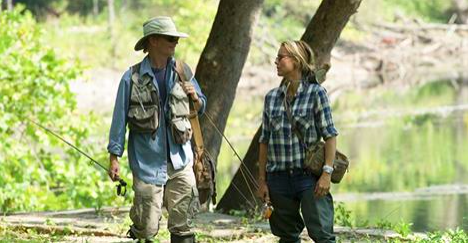 Tonight on CBS Madam Secretary airs with an all new Sunday November 8, season 2 Episode 6 called, “Catch and Release.” and we have your weekly recap below. On tonight’s episode, Elizabeth (Tea Leoni) and President Dalton (Keith Carradine) fear a power grab within the Russian government in the wake of President Ostrov’s death.

On the last episode, Elizabeth and President Dalton feared a power grab within the Russian government in the wake of President Ostrov’s death. Also of concern, especially for Cybersecurity Coordinator Oliver Shaw, was identifying the hacker who interfered with the communication system on Air Force One. Meanwhile, Jay devised a plan to fight Russian propaganda. Did you watch the last episode? If you missed it, we have a full and detailed recap right here for you.

On tonight’s episode as per the CBS synopsis, “Elizabeth is out for justice after a U.S. aid worker is killed in Syria by the first known American ISIS leader. The death also prompts Elizabeth to recall all aid workers stationed in Syria, including her brother. Meanwhile, Henry feels conflicted when Dmitri asks for help saving Ivan, who has been called back to Moscow.”

Tonight’s episode of Madam Secretary kicks off with an American EMT in Syria – he is being assassinated for spying on the Islamic State. A man dressed in black with his face covered called out President Dalton in the video and warns him that he will kill all so-called aid workers on his side of the border, and then he proceeds to slit Luke Miller’s throat.

President Dalton and Elizabeth McCord are watching the video at the White House. Dalton slams the laptop closed – he says the killer in the video goes by the name “Abu Nahar.” But, Abu Nahar isn’t just any ISIS member, he is American and in his mid 20’s. He speaks fluent Arabic and Egyptian, but clearly has an American accent.

They are working on getting more information on Abu Nahar and shutting down the video – in the mean time, Elizabeth advises the President to get all aid workers out of Isis territory. Elizabeth heads to her office, she has her team working on getting the video off from social media and searching for Abu, she sits down at her desk once she is alone and calls Luke Miller’s parents to tell them that their son was murdered. Nadine orders Blake to start calling the aid workers still in Iraq and telling them about the evacuation.

At the War College, Dmitri pays Henry a visit in his office. Dmitri is worried about Ivan being sent back to Moscow – he thinks that Maria Oscov is responsible for it because she found out that Ivan is a homosexual which is NOT okay in Russia. Dmitri confides in Henry and tells him that he is afraid they will throw Ivan in prison, and Ivan’s father would rather see his son dead than exposed as gay. Dmitri wants Henry to help Ivan – when Henry says that he can’t do that, Dmitrie freaks out. He begs him and says that Ivan is his only friend in the US. Henry caves and visits his handler, he wants to get Ivan an asylum in the United States. He argues that if Ivan is thrown in Russian prison, Dmitri will snap – and they need him stable.

Nadine and Daisy have been working the Abu Nahar case – they have a suspect named Adam Fanning. His mother is Judith Fanning, a state dept. employee in the Near East Bureau, she was stationed in Cairo for 6 years and Adam grew up there. Then he came back to the United States and went to high-school, after a few years he went back to Egypt and joined Isis.

Nadine has Judith Fanning come in to the office, Judith says that she didn’t know anything about a new Isis beheading video. Elizabeth plays the video for Judith, even though her son’s face is covered – it is obvious that she recognizes his voice. She chokes up and starts crying. After her meeting, Elizabeth fills Jackson and Dalton in on Adam Fanning, she says that Judith lost contact with him years ago, but she is being debriefed by the FBI to make sure. Elizabeth and Russell begin arguing over whether they should release his name and face to the press and put a bounty out on him or not – they don’t want the public to know that his mother is part of the US government. Dalton shouts that he wants Fanning captured of killed ASAP – and he doesn’t care which.

Later that night Elizabeth is being dropped off at her house, her brother Will comes out of nowhere and is shouting at her that he wants to launch a formal complaint. He is furious because the marines dragged him out of Iraq where he was working as a doctor. Elizabeth argues that he is the Secretary Of State’s brother – which means that Isis would love to get their hands on him. While they are bickering, Henry and the kids rush outside to greet Will. After their family dinner, Elizabeth confides in Henry that she is worried about her brother Will. She thinks that he is avoiding going home to his wife and kids – Henry says that she should take him fly-fishing.

Late at night, Elizabeth gets a phone call from Russell Jackson. There’s a problem with Judith Fanning’s story – apparently she lied about the last time she talked to her terrorist son Adam, it wasn’t years ago…it was just 6 months ago. And, she sent him $8,000. So, Judith Fanning is in trouble for financially aiding Isis.

The next day at work Nadine briefs Elizabeth – Judith Fannin is still insisting that the money she sent to her son did not go to Isis, she doesn’t agree with the Caliphate. Nadine thinks that Judith just felt guilty because she was a single working mother and estranged from her son. Nadine says that Judith feels horrible because her husband died from Huntington’s disease – which means that Adam most likely has it as well. Elizabeth visits Judith in the interrogation room and she confirms that her son has Huntington’s and that is what she sent the cash for. She sobs and begs Elizabeth not to have her son killed when he is captured.

Elizabeth takes a break from work and spend the afternoon fly-fishing with her brother Will. She asks him when he is going to go home to his wife, she is tired of making excuses for him. Will argues that in his line of work he has to choose saving lives over show-and-tell in Kindergarten. He tells Elizabeth that he and his wife Sophie had a deal – he didn’t want a kid – and Sophie knew that if they had a baby, she was going to be the one doing most of the parenting. Meanwhile back at the White House, Nadine and Blake meet with Candice – they are trying to bribe her to get them information on Huntington Disease medicines going in and out of Syria so that they can use them to track down Adam.

In the dorm, Ivan and Dmitri are fighting over him getting sent back to Russia. Henry interrupts, Dmitri tells Ivan that Henry can help save him. Henry tells Ivan that he knows he is going to be humiliated and thrown in prison back in Russia. He promised to get him an asylum hearing in the United States as long as he is willing to come out and explain that his life is in danger because he is gay. Since Ivan doesn’t want the asylum hearing, Henry tells him that he needs to take Doreschevitz aside and have a real conversation with him – and remind him that he is going to lose a good soldier if he ships him back to Russia.

Elizabeth returns to the White House, and Nadine and Blake have information on the Huntington Disease meds. Elizabeth wants to know what they promised Candice – Blake confesses that they guaranteed her a three hour dinner with the Secretary of State. In his office, Henry gets a strange message from Ivan. He rushes to his dorm room just in time to hear a gun shot, Ivan just shot himself in the head and committed suicide – Henry was about 2 seconds too late.

Elizabeth and Dalton head to a meeting later, they have all of the intelligence that they need on Adam Fanning’s medicine. They learned that a courier named Monsour picks the pills up from a hospital in Antyka and then he had delivers them to Fanning. All that they need to do is follow Monsour and he will lead them right to Fanning.
The next day a soldier tails Monsour to Fanning’s camp, Elizabeth and the President watch the live video feeds.

They confirm that the Colonel has a clear shot of Adam Fanniing – they can take him out right then and there. Elizabeth thinks of Adam’s mom Judith, she tries to convince the president to have them bring Adam in, she points out that he is upper level and could have significant information and intelligence on Isis. President Dalton ignores Elizabeth’s requests, he tells the Colonel to take Fanniing out – they watch was a missile crashes straight in to the ground where Fanning and the medical coroner were standing there talking.

Elizabeth heads home and her brother Will is furious – he saw the story on the news, and he knows that Elizabeth had his medical courier killed as well as Adam. Will shouts that Fanning wasn’t the only one who was using Monsour to get medicine. Now, hundreds of people in Syria could die because Monsour won’t be able to bring them medicine. Elizabeth and Will wind up in a screaming match. Elizabeth gives him a ticket back to Syria – because she knows that is where he really wants to be. But, there is a layover in London because his daughter Annie has a right to see her father.